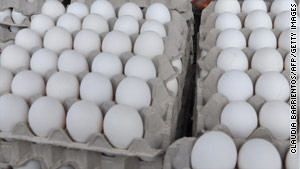 After an uptick in salmonella infections, the Centers for Disease Control and Prevention, and the Food and Drug Administration traced the source and determined it was most likely eggs from Wright County Egg. The company says it is working to determine how the shell eggs are being contaminated.

The new recall covers eggs branded as Albertsons, Farm Fresh, James Farms, Glenview, Mountain Dairy, Ralphs, Boomsma, Lund, Kemps and Pacific Coast and are marked with a three-digit code ranging from 136 to 229 and plant numbers 1720 and 1942, the company said.

The plant number beings with "P - " and is followed by the three-digit code.

Both recalls affect eggs packed in several different sized cartons, from a half-dozen to 18-eggs. Only shell eggs are affected by the recall, the company said.

Salmonella bacteria can be found inside and outside of eggs that appear to be normal.