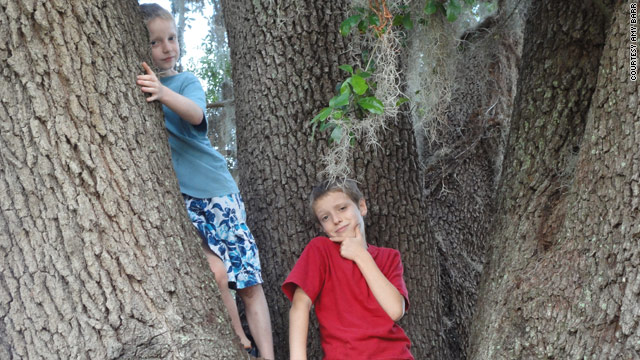 Aidan Barrier, 9, left, and Ian, 11, both have ADHD. They take medication to help them focus.
STORY HIGHLIGHTS

(CNN) -- As a toddler, Ian Barrier got expelled from day care.

"They just said that he was all over the place, he couldn't handle the structure, they didn't have the staff or the skills to deal with it," said his mother, Amy Barr. "They said, 'We think he has ADD or ADHD' and I'm like, 'What is that?"

Ian, now 11, and his 9-year-old brother Aidan are just two examples of some 5 million children in the United States who have received the diagnosis of attention deficit hyperactivity disorder (ADHD), a condition marked by impulsive behavior and a lack of focus.

But although this is a medical condition with medical treatments available, often doctors aren't the ones suggesting a diagnosis. More on ADHD

Many parents begin their struggles with treating their children's ADHD the way that Barr did: with a suggested diagnosis from a school or day care setting. That's a problem, doctors say, when there could be many other factors contributing to a child's behavior.

For a teacher to suggest that a child has ADHD is "inappropriate and dangerous," says Dr. Elizabeth Roberts, child psychiatrist in Murrieta, California. Depression, anxiety and abuse are all possibilities in a child's life that could lead to attention problems, Roberts said. That means that many children are receiving medication for the wrong problem.

Roberts wants to say to all educators: "There are many, many diagnoses that cause these problems, including abuse and depression and anxiety. So please, withhold your judgment."

But Barr is happy that her son's day care center mentioned the condition to her. It explained Ian's behaviors that she had been excusing with the adage "boys will be boys." The center also directed her to a facility where he could get tested.

"I'm just glad that they brought it up, because I was living in it and didn't know any better," she said.

In Barr's case, having gotten her kids tested for ADHD even before school, the educational system has been supportive. But the question of medication has plagued her, with years of trying different combinations of drugs -- sometimes four or five at a time.

Despite medication, Ian pulled the fire alarm at his fourth day care center, dispatching the same fire department that would get him out of a tree at age 9, Barr said. And both brothers have spent time in a psychiatric ward at a children's hospital; for the younger one, it may have been because of overmedication, Barr said.

Medication is quick and easy but it's not the answer alone for working with kids who have ADHD.
--Cheryl Rode, San Diego Center for Children
RELATED TOPICS

"You go through all of that, and it's just various different medications, and then you start to feel guilty: I'm drugging my kid," said Barr, of Fleming Island, Florida. Her boys are now both on just one medication -- Vyvanse (lisdexamfetamine) -- for focusing in school.

All too often, parents come to pediatrician Dr. Claudia Gold's office asking for a prescription for ADHD, based on a recommendation from school. When she consults with parents alone, however, she's likely to hear stories of trauma: a death in the family, an abusive relationship, and other life experiences that the teacher knew nothing about.

"I think that sometimes folks want an immediate answer and they want to help a child as quickly as possible," said Cheryl Rode, Director of Clinical Operations at the San Diego Center for Children in California. "Medication is quick and easy but it's not the answer alone for working with kids who have ADHD."

Experts agree that ADHD does exist as a real disorder, and that some children really do benefit from medication. Studies have shown a biological basis to the disorder and a genetic component, suggesting it can be passed down in families.

But it's not the teacher's place to make diagnoses, or to recommend medication, Gold said.

Teachers and related school personnel have an important role in identifying learning and social challenges faced by students, including those with ADHD, says Clarke Ross, CEO of CHADD (Children and Adults with Attention Deficit / Hyperactivity Disorder). But teachers should never give a diagnosis for the purpose of medication use, or advise the use of medications, he said.

Alana Morales, of Thornton, Colorado, is one of those teachers who has brought up the subject of ADHD testing with many parents. She doesn't tell parents to medicate their kids, but brings up the subject of getting children tested because she thinks it's important for parents to know.

"You have to be so careful because, again, we are not doctors," she said. "But does that mean we don't recognize it? No."

Not every child with ADHD needs medication, doctors say, and Morales said some students benefit more from counseling, special adjustments in school, a tutor, or a different environment for doing homework. It's helpful for parents to get informed about the condition and become advocates for their children -- but some may make the situation worse by having a closed mind to interventions and denying that there's anything wrong, she said.

"You're really setting them up for failure, because it's not a crime, it doesn't mean you're less of a parent if your child learns differently," she said.

Rode agrees with Roberts that teachers should not recommend medication, but thinks that teachers have an excellent frame of reference for what is typical or normal development.

Also the parent of two children with ADHD, Morales has specific strategies she uses when there are kids with ADHD in her class: don't seat them together, put them on the edges of the classroom so she can see them better, and sometimes modify assignments.

Providing an environment conducive to helping kids with conditions such as this is getting harder as budget-tightening schools cut back on teachers, Morales said.

Last year, teaching at a public school in Arizona, Morales had one classroom with 37 students, which included at least four kids with ADHD and one with Asperger's syndrome. And teachers whose job it is to provide extra help to those kids get responsibility for more students, leaving them with less time for each one.

Roberts estimates that only about 10 to 20 percent of children who receive the diagnosis of ADHD actually need medication.

While parents like Barr have tried to inform themselves as much as possible about ADHD and treatment options, some doctors say the condition gets misapplied because it is a quick and easy catch-all diagnosis for a variety of behavior problems, with drugs available to treat it.

Parents are also culprits, and bear some responsibility for their children's behavior, Roberts said. She thinks a lot of kids just need better structure and discipline in the home.

Morales recommends that parents stay involved in their child's school lives by helping them with homework, assisting with organizing their papers, and writing notes to teachers so that everyone is on the same page.

On behalf of her own two children with ADHD, Morales is writing letters now to their teachers explaining how her kids learn differently and what accommodations have been made in the past (they are both on medication). She is also asking the teachers to let her know about any problems this school year.