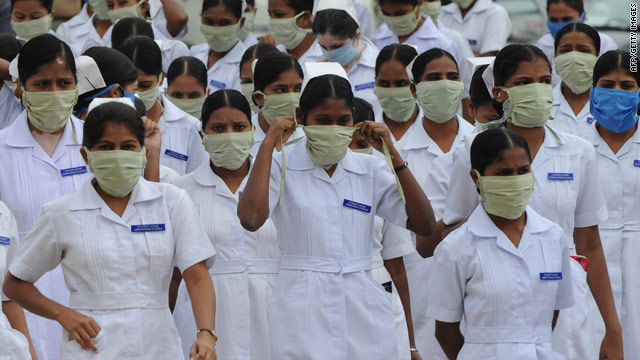 (CNN) -- The global H1N1 pandemic is over, the Centers for Disease Control and Prevention and the World Health Organization said Tuesday.

"We are moving out of the pandemic into the post-pandemic period," said Margaret Chan, director-general of the WHO.

Chan said that while several countries -- including India and New Zealand -- are still experiencing significant H1N1 flu transmission, out-of-season flu outbreaks are no longer being reported in the northern or southern hemispheres.

"This pandemic has turned out to have been much more fortunate than what we feared a little over a year ago," Chan told reporters in a news conference Tuesday.

She attributed the end of the pandemic to several factors: that the virus did not mutate to a more lethal form, the H1N1 flu vaccine proved to be a good match and widespread resistance to the antiviral drug Tamiflu did not develop. "This time around, we have been aided by pure good luck," Chan said.

The WHO announced the global H1N1 pandemic June 11, 2009. A pandemic is a sudden outbreak of a disease that is spread by human transmission, which quickly becomes widespread and affects a large region or several countries.

The CDC in Atlanta, Georgia, said the U.S. Public Health emergency for H1N1 ended on June 23 of this year.

H1N1 is no longer the dominating flu strain. Chan said health officials are now seeing a mixed virus pattern: In addition to the H1N1 strain, an H3N2 flu strain and Influenza B virus also are circulating. All three strains are included in the upcoming seasonal flu vaccine.

So H1N1 is not gone, but as the WHO explains, the flu activity health officials are now seeing is typical seasonal flu activity.

The CDC statement came after an emergency committee of the WHO said Tuesday the public health emergency triggered by the emergence of the H1N1 virus "should be considered over."

The committee advised Chan "that the world was no longer experiencing an influenza pandemic," the organization said in a statement.