Cancer couldn't stop him from his marathon goal 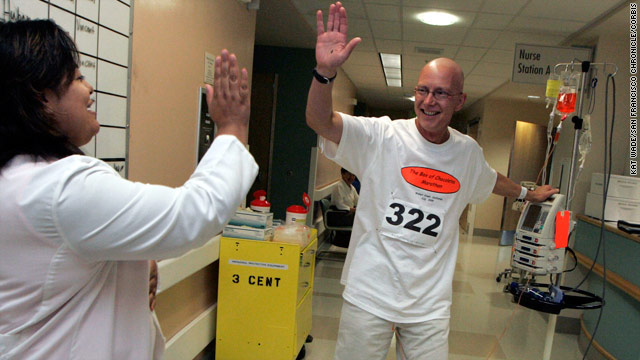 In 2005, cancer patient Brian Fugere did 144 laps around his hospital to raise money for sarcoma research.
STORY HIGHLIGHTS
RELATED TOPICS

(Mental Floss) -- For a serious distance runner, 7 hours, 48 minutes is not a great marathon time. But cut Brian Fugere some slack.

He'd been diagnosed with synovial sarcoma -- a rare soft-tissue cancer -- in his lung. He was in his fourth cycle of chemotherapy. And he was dragging an IV pole for all 26.2 miles.

Oh, and this marathon was taking place in a hospital hallway.

When Brian Fugere started coughing up blood in February 2005, he was an active 47-year-old who jogged regularly and once finished the Boston Marathon in a respectable 3 hours, 19 minutes.

Life was good for the father of four and senior partner with consulting giant Deloitte in San Francisco, California. He had recently gained a small but devout following after co-authoring "Why Business People Speak Like Idiots" with Chelsea Hardaway and Jon Warshawsky, a book that espoused the benefits of straight talk. He appeared on cable news shows and wrote op-ed pieces, and his work was the subject of a clue on "Jeopardy!"

Then came the news nobody is prepared to hear.

"I have been diagnosed with a form of cancer called synovial sarcoma," Fugere wrote friends and colleagues in 2005. "Although this usually shows up in and around the joints, mine appears to be in my lung. I am having surgery to remove my lower left lobe, where the tumor has hunkered down. We're going in for a full assault."

The assault began at UCSF Medical Center, where doctors removed Fugere's lung-lobe as planned. Next up: chemotherapy at Kaiser Walnut Creek Hospital.

The Box of Chocolates Marathon

When he first drifted into the oncology floor hallway, he didn't set out to complete a marathon. Originally he was just trying to keep himself from going stir crazy during chemo, which came with a few complications, including a blood clot, pneumonia and anemia.

Fugere had been reading Lance Armstrong's "It's Not About the Bike: My Journey Back to Life," which stressed how important it was to "keep moving."

"So, I started moving," Fugere said. "I did one, then two, then three, then four, then five laps. Then I started measuring the distance of a lap around the cancer ward and figured out it would take 144 laps to do a marathon.

Fugere called his hallway odyssey the "Box of Chocolates Marathon," borrowing a line from Forrest Gump. ("Life is like a box of chocolates. You never know what you're gonna get.")

"I want to show other chemo patients that you don't have to accept the notion of lying in bed all day getting liquid Drano pumped into you," Fugere said the week of the marathon. "Well, you do need to get the liquid Drano -- you just don't need to take it lying down."

When friends, colleagues and hospital staff members learned of the marathon, they wanted to help. Many wrote or called to offer their support. Some walked alongside Fugere, and lots of people opened their wallets. Those 144 laps raised $42,000 for the Sarcoma Foundation of America. His feat even landed him in Sports Illustrated's "Faces in the Crowd" that October.

In April 2009, Fugere and a friend ran the American River 50 Mile Endurance Run in Sacramento, California. They dubbed their performance "The Running of the Fools" and raised $31,600 for sarcoma research.

And earlier this month, he entered the Vermont 100 Mile Endurance Race. "I am attempting to win the 'Over 50, Missing One Lung Lobe' category," he joked before the event.

After the race, Fugere was too tired to talk about the future. But there's little doubt whatever he has planned will make the rest of us exhausted when he does tell us.