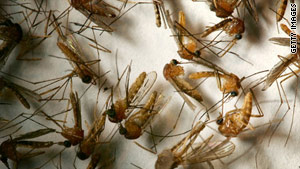 Dengue is acquired through the bite of certain species of mosquitoes, at least two of which are found in Florida.
STORY HIGHLIGHTS
RELATED TOPICS

(CNN) -- The Florida Department of Health confirmed an increase in the number of cases of dengue fever acquired in the Key West area.

New statistics from the department said 24 cases of dengue fever have been reported in Key West through mid-July. Of those, 18 involve Key West residents, five are residents of other Florida counties and one case involves a resident of another state. In addition, 49 so-called "imported" cases of dengue fever are reported in Florida. Those cases involved people who had traveled to areas under a dengue endemic, such as the Caribbean or Central and South America.

The last time there was a dengue outbreak in Florida was 1934. Dengue is acquired through the bite of certain species of mosquitoes, primarily Aedes aegypti, but also Aedes albopictus, both of which are present in Florida, according to the Centers for Disease Control and Prevention.

Surviving dengue fever: The first known victim of the outbreak

"We are concerned that if dengue gains a foothold in Key West, it will travel to other Southern cities ... like Miami," said Harold Margolis, chief of the dengue branch of the CDC in a press release in July. Dengue is the most common virus transmitted by mosquitoes in the world. It causes as many as 100 million infections and kills 25,000 people every year. Dengue is found in tropical and sub-tropical climates worldwide, mostly in urban and semi-urban areas, according to the World Health Organization.

Symptoms appear three to 14 days after the bite of an infected mosquito, according to the Florida Department of Health. They include sudden onset of fever, severe headache, severe pain behind the eyes, muscle, joint and bone pain (giving the disease the nickname "break-bone fever") and bleeding. Gastrointestinal symptoms such as vomiting and diarrhea may also be present in some cases. Dengue fever symptoms usually last four to seven days. It is often diagnosed incorrectly because the symptoms are similar to influenza and other viruses. Dengue hemorrhagic fever is a rare but more severe form of dengue infection that can be fatal if not recognized and treated.

The Florida Department of Health encourages people to be proactive against mosquitoes, said Susan Smith of the department. "Wearing clothing that covers the skin and bug spray with deet are two steps that all Floridians and visitors can take to protect themselves."

There is no vaccine to prevent dengue, but early detection and treatment can reduce the risk of severe illness. Locally acquired dengue outbreaks in the United States are rare. There have been a few confirmed cases along the Texas-Mexico border in recent years.