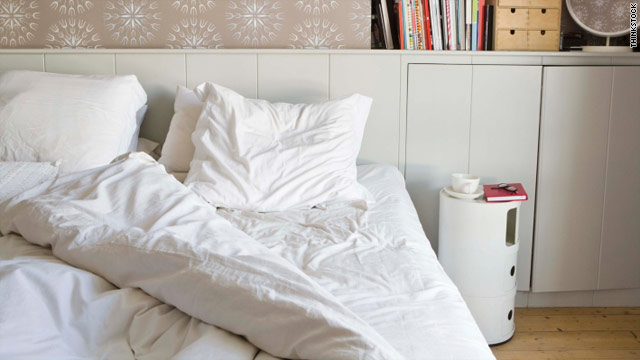 Do you know what's living in your mattress?
STORY HIGHLIGHTS
RELATED TOPICS

The mattress can be a jungle of dust mites and bedbugs, milling around among dried remnants of blood, saliva, sweat and basically all the other bodily fluids you can think of.

Bedbugs have become minor celebrities this week with a report from the National Pest Management Association showing that the problem is on the rise. Bedbug calls have gone up by 81 percent since 2000, the study said, and 67 percent of surveyed pest management companies have treated bedbug infestations in hotels or motels.

These insects are about a quarter-inch long and eat at night, said Howard Russell, entomologist with diagnostic services at Michigan State University. Impressively, while humans can live only a matter of weeks without food, bedbugs can live up to one year without eating -- and their meals consist of blood.

"They're well-adapted to being a parasite," Russell said. "It's really hard to starve them out."

Bedbugs, which leave behind itchy bite marks and can even lead to allergic reaction in some people, aren't the only pests that could be lurking beneath your pillow.

About 10 percent of people are sensitive to house dust mites, said Dr. Clifford Bassett, an allergist in New York. They are even more of a problem for people with asthma.

As if the presence of microscopic eight-legged vermin weren't gross enough, consider that it's not the mites that cause some people to cough and sneeze. It's their excrement.

If this is a problem, consider trying an "allergy-proof" slip cover on your mattress to keep the mites trapped in, so they can't access your sheets and pillows, he said. Also, wash your linens in 130° F heated water frequently. Children's toys can also serve as home to dust mites, so if they're not machine-washable, put them in bags in the freezer for five hours at a time to kill the invisible bugs.

Good vacuuming of the mattress itself is a key line of defense against allergy-causing mites, said Dr. Sharon Horesh Bergquist, assistant professor in the department of medicine at Emory University.

"I don't think people give a lot of thought and energy into proper mattress care.

"It really can improve not only the quality of people's sleep but also reduce their chances of having mites and infestations of bedbugs," she said. "It can go a long way."

Having a mattress pad, particularly of the waterproof kind, is also good to prevent mold and mildew issues, in addition to helping control allergens, said Evan Saks, founder of create-a-mattress.com. Don't forget to wash the pad every few months, he said.

Also, be a little cautious about letting outdoor pets on the bed, Bergquist said. Other kinds of vermin such as lice and scabies can get into the mattress as well, although they are less common than mite and bedbug problems. 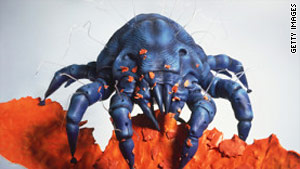 This is a model of a house dust mite, a tiny creature that has eight legs.

All of these bugs and the traces they leave behind, along with the fluids and hair of the human body and whatever pets might hang out on the bed, add up. Companies such as Sit 'N Sleep Mattress Superstore warn that mattresses double in weight every eight to 10 years because of that accumulation of dust mites, bodily fluids and other wear and tear.

Saks says you should pay attention to the warranty on your mattress -- when it runs out, that's probably a good time to get rid of the mattress. Over time, the foams and coils compress, making it less comfortable.

The warranty usually gives instructions on taking care of the mattress, and usually recommends rotating it every two weeks in the first few months to even out the impressions left by sleeping bodies. Eventually you can just rotate it every six months, he said.

If you suspect that there are bedbugs in your hotel room, don't leave your luggage in there or cover it with plastic bags so that you don't take them home with you, Russell said.

A mattress infested with bedbugs should be thrown out right away, Russell said, or else covered with a heavy-duty plastic bag.

Here's how you tell if the nagging red spots on your legs came from bedbugs or mosquitoes: it's the bedbugs that leave dark, reddish-brown spots on the sheets because they defecate as they feed, he said.