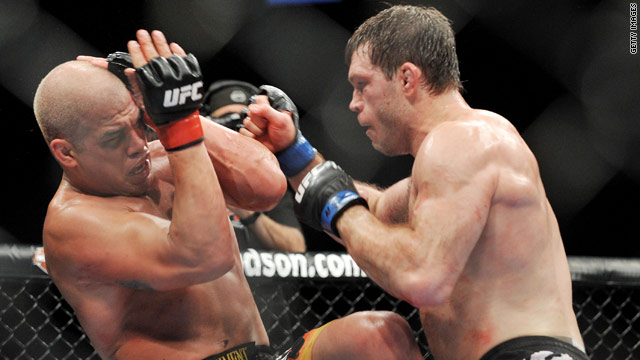 (CNN) -- When a football player flattens his opponent with a bone-crushing hit, the crowd leaps to its feet and roars approval. When hockey referees break up a fight, spectators often jeer. In the increasingly popular mixed martial arts competitions, bloodied and battered fighters can knee, elbow, and kick each other in the face.

In late June, a mixed martial arts fighter, Michael Kirkham, died two days after getting injured in a competition. His death, which is under investigation by the South Carolina athletic commission, brought attention to the controversial sport once likened to human cockfighting. This was the second death in the sport; another MMA fighter, Sam Vasquez, died in 2007.

Violent sports, movies and games enjoy popularity and profitability because of the excitement and "forbidden fruit" factor, say psychology experts.

"There's a rubbernecking syndrome," said Paul Boxer, assistant professor of psychology at Rutgers University. "When you see a body splayed out, you couldn't help it. You had to see."

But supporters say there is more to high-contact sports such as boxing or MMA than an attraction to violence. There is strategy and athleticism involved, they say.

Michael Gettys watches mixed martial arts fights every week on SpikeTV and gathers his friends to watch the pay-per-view matches. As a former college wrestler, he admires how competitors combine different fighting styles such as boxing, kickboxing, muay thai and wrestling.

"You don't make it to the top of the heap by going out like Rocky and just throwing punches at each other," said the 30-year-old computer software engineer. "They are so skilled."

Ultimate Fighting Championship, which started in 1993, is the most recognized name in mixed martial arts.

"Everyone loves a fight," wrote its president, Dana White, via e-mail. "It's in our DNA. The example I like to use is that if you're in an intersection and there's a basketball game on one corner, a soccer game on another, a baseball game on the third, and a fight on the fourth, everyone will go watch the fight. And that's not only true, but it's something that cuts across all demographic and geographic barriers."

He responded to criticism about the violence saying, "This is a contact sport, just like football, hockey, boxing, and basketball are, yet we take pride in the fact that there has never been a death or serious injury, outside of a broken arm or leg, in the history of the UFC. What the sport does promote is discipline, sportsmanship and hard work, all elements necessary for a fighter to be successful here."

The two players who died after MMA fights were not in UFC matches.

Mixed martial arts fighting is popular with the 18-to-34 demographic, said Roy Englebrecht, the founder of the Professional Mixed Martial Arts League, a minor league in California.

"I've not heard from one person, 'Roy, can you stop the blood? Can you have some shows that don't have blood in it?'" Englebrecht said.

"It's the nature of the sport. You get hit. You get a knee to the head. You know, a head wound bleeds a lot faster. We've had some major blood. All MMA, professional and amateur, are regulated by a state commission."

The attraction of violence could be that it gives people "a chance to experience taboo -- events that they can't experience in their own lives -- or see things they don't see in their typical life," said Brad Bushman, professor of communications and psychology at Ohio State University.

Violence as entertainment has existed for thousands of years, from the ancient Egyptians watching re-enactments of the murder of their god Osiris to the Romans' gladiator games, said Bushman.

"If you ask people why they do it, they give you answers like, they're bored and violence is exciting," he said.

Another common response also dates back to ancient times.

"The catharsis idea -- that's a common explanation that Aristotle gave, that by viewing great tragedies, audience members could purge or cleanse their emotions," Bushman said. "There's no evidence for the catharsis theory. It sounds good, but it's false."

If the catharsis theory were true, he said, football players should be less aggressive after a game, because they've been able to purge it from their system. Instead, research has shown that they have higher aggression levels after a game, Bushman said.

When teenagers play violent video games, they get even more aggressive, said Boxer, who has conducted research on the subject.

High-contact sports can also exact a toll on players.

A study published this year assessed the injuries suffered by MMA players. Out of 116 competitions held in Hawaii between 1999 and 2006, the study reported 55 injuries including 28 abrasions and lacerations, six of them requiring on-site suturing or emergency department referrals; 11 concussions; five facial injuries; and an array of orthopedic injuries.

In other high-contact sports, several former boxers and football players have developed traumatic brain injuries believed to be caused by repeated blows to the head.

MMA could be viewed as brutal by a casual observer, Gettys said.

"It's violent," he said. "To a lot of people who do it, it's a good way to release aggression instead of going out and doing something illegal to release it. They're doing something consensual between two people and making money."

"Is it for everybody? No. Then what is?"