Will you have your mother's menopause? 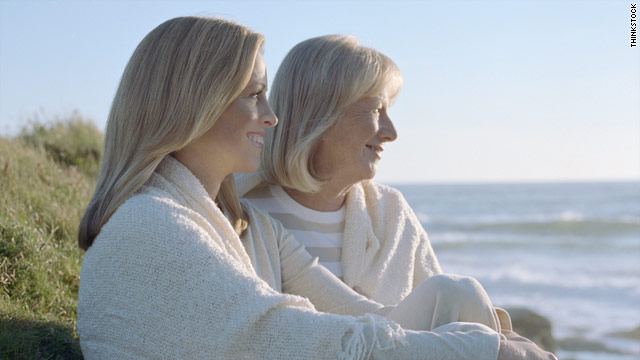 (Health.com) -- Sandra Gordon is dreading menopause. The 46-year-old from Weston, Connecticut, watched her mother's memory falter in her mid-50s, due to changing hormone levels. "Every time I get my period I say to myself, 'Yes! I'm so relieved!' " says Gordon.

But hearing your mother's account of menopause can create a self-fulfilling prophecy, says women's health expert Christiane Northrup, M.D., the author of "Women's Bodies, Women's Wisdom and The Wisdom of Menopause."

"One of my patients said to me, 'My mother always told me the best years of her life started after menopause, and therefore I looked forward to it and never had a single problem.' Another told me, 'My mother told me this is the worst thing that can ever happen to you and I'm terrified,' " she says.

Either way, your mother's menopause isn't always a predictor of what your experience will be. It's not all hereditary, and there are a few things you can do to make your own transition easier.

Menopause is defined as the point in a woman's life when she has stopped menstruating for at least a year. The period of time leading up to menopause is called perimenopause, during which women undergo some pretty drastic hormonal changes and may have irregular periods. Most women start perimenopause somewhere between ages 39 and 51. It generally takes around five years from the start of perimenopause for a woman to stop menstruating.

Genetic factors play a role in this timing: If your mother and other close relatives had an early or late menopause, you probably will too. But your environment and lifestyle choices will play a role as well. For example, you might have an earlier menopause if you smoke, or if you live at a high altitude.

Researchers are currently studying a simple blood test that may predict when a woman will reach menopause. Other blood tests have been for a number of years, but with little credibility, says Margery L.S. Gass, M.D., executive director of the North American Menopause Society.

Health.com: Why sex is better after menopause

While scientists search for the genetic markers that may one day help better predict the big change, that day is still far off. "In terms of trying to tell where a woman is in her transition," says Gass, "right now, we're not there."

And, in good news for women who dread their mom's menopause, when it comes to actual symptoms, genetics aren't a strong predictor, says Gass. "Just because your mother had a difficult experience does not mean that you necessarily will."

Health.com: Your secret to happiness at every age

A number of healthy daily habits may help you avoid some of the worst parts, although the research behind how and why lifestyle changes affect menopause isn't definitive.

Regular exercise -- at least 30 minutes a day, three times a week -- can reduce menopause symptoms. A 2006 study found that even a twice-weekly exercise program decreased severe symptoms in one-quarter of women, while the symptoms of those who did not take part in the exercise program worsened.

Women who've tried it themselves agree. "I've had many [patients] who say, 'I got through menopause by pumping iron,' " says Northrup. Getting physically active can help combat weight gain and increase bone density, she adds, both of which can pose problems at menopause.

Simply changing up your diet may also soothe some of your symptoms. Anything that raises blood sugar, including chocolates and sweets, can interact with stress hormones and rapidly fluctuating estrogen levels to make symptoms like hot flashes worse, says Northrup. She suggests eliminating foods packed with sugar, as well as alcohol and caffeine, which may also trigger hot flashes.

Plus, these unhealthy habits can only contribute to the weight gain you might experience at menopause. "You can no longer continue to drink alcohol, eat fast food, and expect to lose five pounds to get into your little black dress," she says.

While there are confusing and contradictory reports about soy, edamame or tofu -- eaten in moderation -- can reduce hot flashes and boost heart and bone health, according to recent research.

"In general, I recommend a variety of plant foods" in addition to soy, says Northrup. A diet heavy in plant foods should help with breast pain and hot flashes because the hormones naturally found in plants can act like estrogen in the body, she says.

Some herbs, like dong quai and flax, also contain natural hormones, says Northrup. These and other natural menopause remedies can help cut down on symptoms because they protect us from over-stimulation by the rapidly changing levels of estrogen during menopause, says Northrup.

However, the jury is still out when it comes to most supplements. Recent reviews of black cohosh, dong quai, evening primrose oil, and red clover found that more evidence is needed to confirm their effects.

During menopause the body produces less estrogen and progesterone, which can play a role in shortening your fuse and keeping you awake at night. In addition, being in stressful situations can make those hormone fluctuations even worse, says Northrup. Finding a few minutes to relax and unwind can help combat these mood changes.

"Believe it or not, most hot flashes will go away with two 20-minute meditation sessions a day," she says, "but most women will not take that time."

Meditation may help you sleep through the night as well. Hormone replacement therapy and natural sleep remedies such as valerian can also help, says Northrup.

Use it or lose it

Cognitive changes are common with age, but a 2009 study found that memory and learning take a direct hit leading up to menopause. The fluctuations in hormone levels during perimenopause seem to affect memory.

Starting hormone replacement therapy (estrogen or progesterone) before the last period may help balance the levels needed for proper brain function, the study found. However, beginning therapy after the age of 60 or 65 may actually increase a woman's risk for dementia.

Simply putting the brain to work may also help trigger the parts of the brain that falter during menopause, says Northrup. Take on a new challenge at work, learn a new language, or do a daily crossword puzzle.

In a perfect world, we'd be preparing for menopause as early as our late teens, says Northrup, but even starting to add omega-3 to your diet, ramping up your exercise program, and taking some "me time" in your 30s can be beneficial. Data from a 2000 study showed that these healthy habits are most effective if adopted early in life, but that doesn't mean it's too late to start!.

Even though these healthy habits have little to do with genetics, many women learn from their mothers' experiences anyway.

"My mother was 36 when she started the change," says Deb Bailey, of Hot Springs, Arkansas.

"She had such a tough time the doctor talked her into a hysterectomy." She went on to start hormone replacement therapy and developed breast cancer and lung cancer, which ultimately took her life in 2004, says Bailey.

Studies have linked long-term hormone therapy to an increased risk of breast cancer and dying from lung cancer (among other health risks). Experts recommend that you take hormones at the lowest dose and for the shortest period of time possible.

"Now that I'm going through [menopause] at 43, I don't take anything but vitamins and roll with the punches," Bailey says.