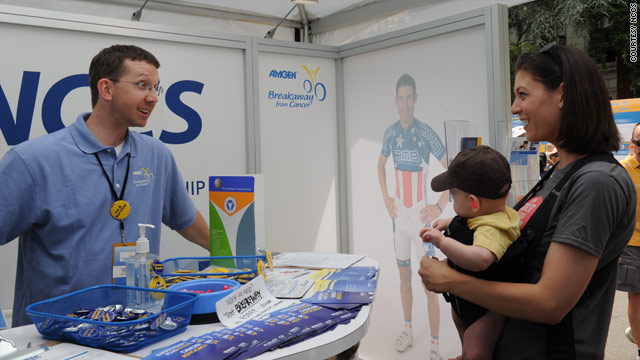 Jasan Zimmerman volunteers for the National Coalition for Cancer Survivorship at the Amgen Tour of California bike race in May.
STORY HIGHLIGHTS
RELATED TOPICS

(CNN) -- Jasan Zimmerman remembers running into his room, burying his head under a pillow and saying he didn't want to die. His mother chased after him and told him, "I'm not going to let you die."

He was 15, and his parents had just told him that he had his second case of cancer, which was most likely caused by radiation from treating the first.

Zimmerman, now a 34-year-old molecular biologist in Palo Alto, California, has had three instances of cancer: a neuroblastoma on the neck at 6 months old, thyroid cancer at 15 and a recurrence of thyroid cancer at 21. He has been healthy since then, but he hasn't stopped worrying about getting sick again.

"It's always in the back of my mind; it kind of depends what brings it to the forefront," he said. "I had a bruise on my leg, and I didn't know where it came from, and I was worried that it was some kind of blood cancer. Little things like that kind of hit me."

A new study in the Journal of the American Medical Association finds that survivors of childhood cancer are at increased risk of dying of second cancers and circulatory diseases 25 years or more after their diagnosis.

Researchers, led by Raoul Reulen at the University of Birmingham in the United Kingdom, looked at data from the British Childhood Cancer Survivor Study. It includes nearly 18,000 five-year survivors of cancer who received diagnoses between 1940 and 1991, before age 15. Study authors followed them until the end of 2006.

People who died 45 years or more after diagnosis were also more likely to have died from second primary cancers -- in other words, not a recurrence of the first cancer but a different kind -- and circulatory problems.

The subsequent cancers and circulatory diseases probably stem from treatment that childhood cancer survivors received for their first cancer, Reulen said. Doctors recognize that radiation exposure can lead to second primary cancers and that certain chemotherapy drugs can cause heart problems. For example, girls with Hodgkin's disease may go on to develop breast cancer because of high-dose radiation directed at the chest.

But the study did not have detailed information about the participants' treatment: The exposures of radiotherapy and chemo, and other data about treatment intensity were not included. Also, participants were treated between 1940 and 1991, meaning survivors treated in the past 20 years may have received more advanced treatments and may have different outcomes.

Part of prevention efforts should be to caution childhood cancer survivors against smoking and drinking alcohol, and to encourage them to live a healthy lifestyle in terms of diet and fitness, Reulen said.

Both at 15 and at 21, Zimmerman wasn't thinking about how treatment that saved his life may have given him cancer again; he was just angry and wanted to get the next procedure over with. In high school, he had just made the varsity tennis team when he had have surgery on his thyroid.

"The coach had told me that I was going to play doubles in the playoffs, and so I was really happy, and then [I got] the diagnosis, and I went to see the surgeon," he said. "I was like, 'Wait, wait, wait, I need a couple more weeks, because we have the playoffs,' and he was like, 'No.' "

Hospital visits and treatments took center stage, so the "meeting girls" phase of high school was delayed. Only in the past couple years has he started thinking that it might be nice to get married.

If he gets to the point of considering children, he would want to have genetic counseling to try to figure out whether he would pass on a hereditary risk of cancer and what effects his treatment may have had in that regard, he said.

This is a worry among many cancer survivors, but overall there's not much evidence of an increased risk of cancer in the children of people who had childhood cancer, Reulen said. There are, however, certain underlying genetic disorders that cause cancer and could get inherited.

Childhood cancer survivors often speak of a "new normal" in their lives, noting a difference in perspective between themselves and their peers, said Sujin Ann-Yi, vocational counselor at the University of Texas M.D. Anderson Cancer Center. The issues that they face -- continuing medical issues, wondering whether to tell people about their cancer history -- persist long after treatment has finished.

It took Zimmerman more than 25 years before he wanted to publicly talk about having cancer; now, he volunteers with the National Coalition for Cancer Survivorship. He participates in advocacy events and shares his story so that others can be aware of what childhood and young adult cancer survivors go through, and the importance of psychosocial support.

Because of an experience of focusing on what really matters in life, childhood cancer survivors also tend to feel more mature than their peers, said Martha Askins, a psychologist at M.D. Anderson's Children's Cancer Hospital. They may also double their efforts to pursue goals so that they reach their aspirations earlier.

Zimmerman has been interested in science ever since he was a child just because of being sick, he said. He had wanted to do cancer research in graduate school, but his adviser steered him away from it because of a stigma in the field against people "looking for their own cures." Today, his projects range from ethanol to making enzymes for industrial cleaning.

In retrospect, Zimmerman feels it's better that he doesn't focus on conducting cancer research, because "it might have hit a little too close to home." But his science background does come in handy in advocacy efforts for cancer research, he said.

He maintains a close relationship with his parents, who are still concerned whenever he goes for a checkup. He gives them a lot of credit for his survival, as their guidance and vigilance and knowledge about the medical profession helped him through.

"I kind of worry about being a burden on them, as they were a young couple, and they had this sick kid, and they kind of had to learn about this -- kind of a trial by fire," he said.