Lawmakers probe hospital that may have infected veterans with HIV 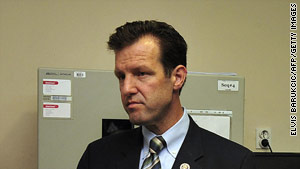 (CNN) -- The House Committee on Veterans' Affairs will hold a hearing Tuesday afternoon into the safety lapses at the John Cochran VA Medical Center in Missouri.

The hospital is under fire because it may have exposed more than 1,800 veterans to life-threatening diseases such as hepatitis and HIV.

Carnahan said in late June that he was calling for a investigation into the issue and had sent a letter to President Obama about it.

"This is absolutely unacceptable," said Carnahan, a Democrat from Missouri. "No veteran who has served and risked their life for this great nation should have to worry about their personal safety when receiving much needed healthcare services from a Veterans Administration hospital."

Dr. Gina Michael, the association chief of staff at the hospital, told the affiliate that some dental technicians broke protocol by hand-washing tools before putting them in cleaning machines.

The instruments were supposed to only be put in the cleaning machines, Michael said.

The hand-washing started in February 2009 and went on until March of this year, the hospital told KSDK.

The hospital has set up a special clinic and education centers to help patients who may have been infected. However, Carnahan said he feels more should be done and those responsible should be disciplined.

"I can only imagine the horror and anger our veterans must be feeling after receiving this letter," Carnahan said. "They have every right to be angry. So am I."

This is not the first time this year a hospital has been in hot water for not following proper procedures.

In June, Palomar Hospital in San Diego, California, sent certified letters to 3,400 patients who underwent colonoscopy and other similar procedures, informing the patients that there may be a potential of infection from items used and reused in the procedures.