Doc talk can help get babies off bottle at 9 months, study says 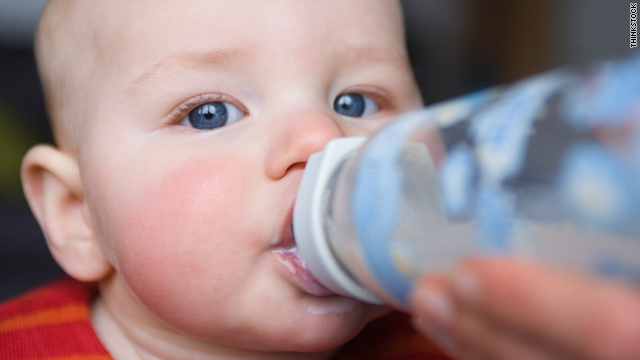 (CNN) -- A simple, five-minute conversation with parents during their baby's regularly scheduled 9-month checkup can help their child stop bottle-feeding, according to new research released Monday.

It's an important step because prolonged use of the bottle can lead to tooth decay and nutritional deficiencies in young children. Waiting later can make it harder to make the transition, experts say.

"In five minutes, we changed the health trajectory of a child," says Dr. Jonathon Maguire of St. Michael's Hospital in Toronto, Canada. He's a pediatrician and lead author of the study, which appears in Monday's edition of the journal Pediatrics.

Maguire and his colleagues followed 201 children until they were 2 years old and found a 60 percent reduction in prolonged bottle use when doctors made a point of raising the subject at the 9-month checkup.

The doctors started off giving the children's parents standard health information during the visit. Half of the parents also had the five-minute conversation about the risks of continued bottle use. These parents were given a sippy cup and step-by-step instructions on how wean the child off the bottle and on to the sippy cup within a week.

Maguire recognizes that there is a certain amount of convenience to using a bottle. It doesn't spill and at a certain point, babies can hold it themselves. That's OK, he says, "except when it's interfering with the health of their children."

Maguire adds it's a good time to start weaning the babies off the bottle at 9 months because, "the older they get, the harder it gets to modify their behavior."

The study authors said the 9-month checkup is a good time to schedule this consultation because no routine vaccinations are scheduled, allowing for the time to have a conversation about nutrition in the second and third years of life.

Tooth decay in infants and toddlers is not easy to repair, according to Dr. Martha Ann Keels, a pediatric dentist and surgeon at Duke University. It can require putting a very young child under general anesthesia, at a cost of thousands of dollars. In many cases, that's the only way to keep the baby still enough to drill out cavities, says Keels, who's also a spokeswoman for the American Academy of Pediatrics.

Parents may give their babies a bottle in bed because it soothes and helps the little one (as well as parents) get some sleep. Breastfeeding moms may allow their babies to suckle throughout the night for the same reason.

The problem is that when infants are allowed to suck on a baby bottle filled with milk or juice for a prolonged period, it can lead to "baby bottle tooth decay," or "nursing bottle caries." Caries is the medical term for the progressive destruction of bone or tooth, specifically tooth decay.

When a baby latches on to the bottle, breast or sippy cup, the tongue covers and protects the bottom front teeth, resulting in the decay pattern that Keels calls the "classic presentation," in which the top incisors are decayed and the bottom incisors are not.

This type of decay occurs between 1 and 3 years of age, when a baby's teeth start coming in. It develops rapidly and can cause severe dental pain and infection, according to the American Dental Hygienists' Association.

This is why the pediatricians group recommends babies be weaned off the bottle and sippy cups by the time they are 1. Another reason for weaning babies is that they should be getting most calories from solid foods, to ensure proper nutrition.

According to the AAP, by the time a baby is a year old, the toddler needs to eat food from the same four basic groups as adults do: meat, fish, poultry, eggs; dairy products; fruits and vegetables; and cereal grains, potatoes, rice, breads and pasta.

Keels says the bottle and sippy cup are not the problem. It's the content.

Milk (cow's or breast milk), formula and any other sugary drinks contain carbohydrates. When these carbs come in contact with the bacteria in the mouth, they produce acids that cause the enamel on a baby's new teeth to erode and leads to early tooth decay.

Keels says there's a need for "quiet time in the mouth so the saliva [in the mouth] can heal the teeth. By not having babies on the bottle, sippy cup or breast for prolonged periods of time, it will give the mouth some rest times, she says.

If parents find their children having problems letting go of the bottle at night, she adds, it should be filled with water, which doesn't cause cavities.