Might as well face it: You're addicted to love 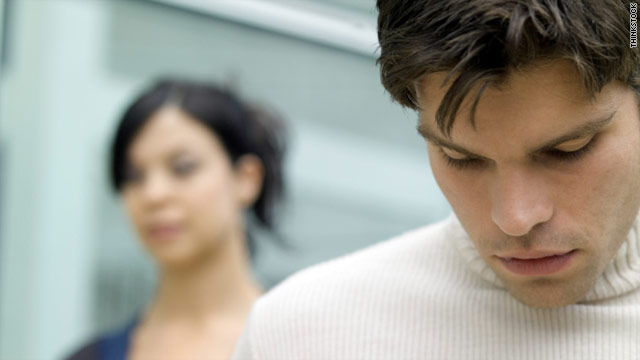 Treat getting over a rejection the way you would an addiction, experts say.
STORY HIGHLIGHTS

(CNN) -- Jim Dailakis still remembers how he stood below his then-girlfriend's balcony, held up a tape player and blasted a George Michael song that the two of them loved.

But this romantic gesture, reminiscent of John Cusack serenading Ione Skye in "Say Anything" (but before that movie came out), didn't make his first love stay with him forever. After a 2½-year relationship, he got a letter from her in 1988, saying "thanks for everything; we have to move on."

"The first month was horrible, because when you break up with someone, it's like a death, but it's even worse because the corpse goes on living, just without you," said Dailakis, 41, an Australian-born comedian in New York.

According to new research, the brutality of loving someone who has rejected you has a biological underpinning. A study published in this month's issue of Journal of Neurophysiology finds that, for those who have been recently rejected, the brain may treat love as an addiction, craving it in the same way as cocaine.

Fisher and colleagues did a brain imaging study of 15 people who had recently been rejected in love -- on average, 63 days before the study. Such a small sample size is typical for neuroimaging research.

Participants had not been married to their former partners and had been in a relationship with that person for an average of 21 months. The average age was 20.

Each participant viewed a photograph of someone who had recently rejected him or her in love and a photograph of a different person that didn't inspire good or bad feelings. In between exposures to photographs, participants were asked to count backward as a distraction, moving the blood to areas of the brain not connected to emotion.

Upon viewing a photo of a former partner, participants' brains also showed heightened activity in the regions associated with, respectively, decision-making, physical pain and deep attachment to another person.

"When rejected, you're still madly in love with this person. You're really craving them," she said. "You're obsessively thinking about them. You're in physical and emotional pain. You're feeling deeply attached to the person, and you're also really desperately trying to figure out what happened here."

This experience does not necessarily lead to unhealthy behaviors, she said. Other issues, such as impulse control, would feed into disruptive actions such as stalking.

Some people handle rejection better than others, and research should be done to see what differentiates those people, Fisher said.

Fisher's previous research found that being happily in love was linked to brain activity associated with the rush of cocaine. In other words, if you have a partner you're in love with, it's like you are on cocaine, but if that person has rejected you, you crave the high of the drug.

Mel Brake of Springfield, Pennsylvania, was the one who ended a relationship that had been on and off for six years, but he also relates to the feeling of love as an addiction.

He had been saving voice mails from his former girlfriend since their breakup four years ago but didn't feel completely comfortable hearing her voice on them until last week.

"In a sense, it's sort of like somehow I preconditioned my mind to say, no matter how bad the relationship was, I was in love," said Brake, 38, an editor and publisher with his company, Mel Brake Press Inc. "I needed this person."

If love is an addiction, getting over a lost love should be akin to quitting smoking, Fisher said. Don't write, don't call, don't show up, throw out letters, and don't try to be friends with that person for a while. Don't ruminate; instead, try new things. Novelty drives up dopamine in the brain, which can help you feel better.

Devoting himself to his passion for art -- singing, poetry and other writing -- helped Brake confront the hardest feelings in the wake of the breakup.

Dailakis also did more poetry-writing after his first love dropped him and went to the gym more, trying to channel his depression, anger and regret into something positive. He found that he even liked being single.

He recommends that people in that position spend more time alone and with friends.

Today, he is "possibly" dating someone new.

As for the girl who turned him away so long ago, Dailakis doesn't hold any grudge today.

"I did develop a really cynical sense of humor, I guess, but to me, cynicism is just another word for reality," he said.