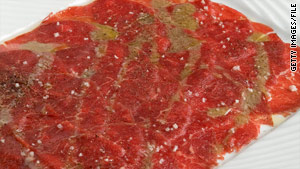 A federal agency is concerned that some consumers may still have recalled bison meat in their freezers.
STORY HIGHLIGHTS
RELATED TOPICS

(CNN) -- A Colorado company is recalling about 66,000 pounds of ground and tenderized steak bison meat that may be contaminated with a potentially deadly strain of E. coli, according to the U.S. Department of Agriculture's Food Safety and Inspection Service.

Five cases of E. coli O157:H7 illnesses in Colorado from June 4 to June 9 are believed to be associated with the products, officials said Friday. The meat was distributed to retail establishments nationwide and to food service distributors in Utah and Arizona. The products, produced between May 21 and May 27, are being recalled by Rocky Mountain Natural Meats of Henderson, Colorado.

Although the sell-by dates on the products have passed, the Food Safety and Inspection Service said some consumers might have frozen the meat before using it, "and there is concern that some product may still be frozen and in consumers' freezers."

The recalled products include:

• 16-ounce packages of Nature's Rancher Ground Buffalo with a sell- or freeze-by date of June 22.

• 16-ounce packages of The Buffalo Guys All Natural Ground Buffalo 90 Percent Lean with a lot number of 0147.

• 12-ounce packages of Great Range Brand All Natural Bison Steak Medallions with a sell- or freeze-by date of June 23 and 24.

• 12-ounce packages of Great Range Brand All Natural Bison Sirloin Steaks with a sell- or freeze-by date of June 20, 23 and 24.

E. coli O157:H7 is a bacterium that can cause bloody diarrhea, dehydration and, in severe cases, kidney failure. It can be fatal.

"The very young, seniors and persons with weak immune systems are the most susceptible to foodborne illness," the agency said.