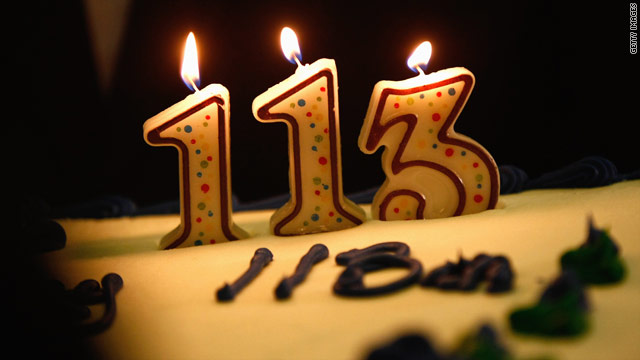 (CNN) -- If celebrating triple-digit birthdays sounds appealing, scientists may be able to determine if you're likely to live that long.

Researchers from the Boston University Schools of Public Health and Medicine and the Boston Medical Center have identified genes associated with living longer. They also predicted using genetics alone many of those among study participants would be a centenarian. Their results will be published in the journal Science.

"Could these signatures tell a physician and their patient who's going to be at increased risk for a particular disease sooner, and can this lead perhaps to interventions that might help them? I think that's a possibility down the road," said co-author Dr. Thomas Perls of Boston Medical Center, in a press conference.

People who live to 100 are a model of healthy aging, the study said. Previous research shows that about 90 percent of centenarians are disability-free until around age 93, said Perls, founder and director of the New England Centenarian Study, the largest study of centenarians in the world, based in Boston, Massachusetts.

The study looked at 1,055 centenarians and 1,267 controls -- people who weren't 100 yet. As much as possible, researchers matched the genetic backgrounds of controls to those born in 1910 or before.

The centenarians in the Boston group's study were all Caucasian, meaning the results should be replicated with participants of other ethnicities, Perls said. His group is going to be collaborating with a group in Japan to further investigate the issue. It could be that people of different ethnic backgrounds carry distinct genes that help them live to 100, he said.

Scientists identified 150 DNA sequence variations called single nucleotide polymorphisms among those 100 years old and above that may have contributed to their healthy aging. In the control group, 15 percent of participants had longevity-associated genes. That means, in theory, 15 percent of the American population is predisposed to live to be 100.

But there's approximately just one centenarian per 6,000 in the population of developed countries such as the United States; in 2010, there are about 80,000 in the U.S. There's only one "supercentenarian" -- someone over age 110 -- in every 7 million people, Perls said. That's partly because in the era when today's centenarians were born, medicine was not as advanced, and average life expectancy was about 47. In other words, genetics isn't everything; environment and lifestyle also play into living long.

Using their genetic model, researchers found they could predict with 77 percent accuracy who would live to be 100 or higher based on genetics alone in the sample.

"This is very important information that should make anybody aware that if we are going to find genes that are protecting us from aging, it is not an impossible mission," said Dr. Nir Barzilai, director of the Institute for Aging Research at Albert Einstein College of Medicine in the Bronx, New York, who was not involved in the study.

Researchers noted that while 77 percent accuracy is relatively high, that means that there's an additional 23 percent of centenarians who do not have the "right" genetic signatures -- in other words, environmental factors are still relevant.

Few centenarians have a history of smoking, and they tend to not be substantially obese, Perls said. Seventh-day Adventists, the religious group whose members have an average life span of 88 in the U.S., are another example of how lifestyle may impact longevity. Because of their religion, they have a vegetarian diet, exercise regularly, abstain from alcohol and smoking, engage in exercise, and manage stress well -- such factors may help them live well beyond the national average of 78 years.

"It really does speak to the incredible importance of lifestyle factors," Perls said. "To live the extra 10-15 years beyond the 88, our paper is indicating that genetics may play an important role in distinguishing those individuals from the average population."

Some of the genetic signatures identified in the study could are associated with delay in the onset of dementia, heart disease, diabetes or stroke, Perls said. Others are associated with being able to live a long life despite having one or more of those diseases for a long time.

"Understanding better the different pathways of getting to 100 will be very important," he said.

Surprisingly, researchers found little difference between centenarians and controls in terms of the number of genetic variants associated with diseases of aging, such as cardiovascular disease, stroke and dementia. That means that perhaps what makes centenarians live longer is not a lack of predisposition to such illnesses; it's the enrichment of genetic variants associated with longevity, said Paola Sebastiani, lead author of the study and professor of biostatistics at Boston University School of Public Health.

Previous research in the genetics of healthy aging is already leading to the development of pharmaceuticals to help people live longer, Barzilai said. One such type of drug is called a CETP inhibitor, intended to reduce "bad" cholesterol (LDL) and raise "good" cholesterol (HDL). Merck & Co. is in phase III clinical trials for a CETP inhibitor called anacetrapib; Roche is currently recruiting participants for a phase III trial for another drug of this type called dalcetrapib.

"Our goal is not to make people live to 100; the goal is to have people have good quality of life and [be] free of disease at the end of their life," Barzilai said. "I would say that longevity is a side effect of those drugs."

Although companies may try to make tests to see who will live to 100, this information may not be valuable to the individual, as accuracy is only 77 percent and lifestyle factors are still important, Perls said.

But the results do point toward the era of personalized medicine, he said. The methods developed by Sebastiani could be used to find out whether there are genetic signatures for positive or adverse reactions to certain medications, for example, Perls said.