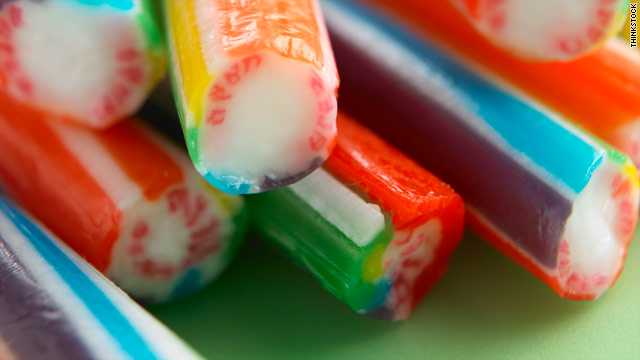 (Health.com) -- Eating too much sodium can push your blood pressure into the danger zone. Now, researchers are reporting that eating too many sweets--or drinking too much soda--may have a similar effect.

People who consume a diet high in fructose, a type of sugar and a key ingredient in high-fructose corn syrup, are more likely to have high blood pressure (hypertension), according to a new study.

Drinking 2.5 cans or more of non-diet soda per day--or consuming an equivalent amount of fructose from other foods--increases your risk of hypertension by at least 30 percent, the study found. What's more, the increased risk appears to be independent of other dietary habits, including sodium, carbohydrate and overall calorie intake.

The study, which appears in the Journal of the American Society of Nephrology, focused on foods containing high-fructose corn syrup and other added sugars, such as soda, fruit punch, cookies, candy and chocolate. (Although fructose occurs naturally in fruits, the researchers excluded them because they contain other nutrients that are difficult to measure.)

"High-fructose corn syrup is very prevalent," says Dr. Michel Chonchol, M.D., the senior author of the study and a blood pressure specialist at the University of Colorado, Anschutz Medical Campus, in Aurora. "If you go to grocery stores, it's everywhere."

Chonchol and his colleagues analyzed the diet and blood pressure readings of more than 4,500 U.S. adults with no history of hypertension. The data used in the study was collected in nationwide surveys over a four-year period by the Centers for Disease Control and Prevention, and also included information on health measures such as physical activity and body mass index.

The researchers estimated each person's fructose intake using detailed diet questionnaires and nutrition information from the U.S. Department of Agriculture. The average fructose intake was 74 grams a day, an amount roughly equivalent to that found in 2.5 cans of soda.

Hypertension can affect the health of blood vessels and is a leading risk factor for heart disease, kidney disease, and other ailments.

Health.com: The 50 Fattiest Foods in the States

The findings don't prove that fructose actually causes hypertension, however. Although the researchers took various health factors and dietary habits besides fructose intake into account, it's always possible that other, unknown factors explain the apparent link between fructose and hypertension, says Dr. Cheryl Laffer, M.D., an associate professor of internal medicine at Texas A&M Health Science Center College of Medicine, in Temple.

The study "doesn't tell us anything about causation," she says. "People who have high blood pressure may eat more fructose. It can go either way."

One important drawback of the study is that the participants reported their own diets based on memory, which makes the estimates of fructose intake less accurate.

But the study's limitations don't mean that people should feel free to go on sugar binges, Laffer says. "I wouldn't discourage people from eating less fructose, because we have evidence that high fructose [consumption] is not particularly good for you," she says.

Health.com: The Best Foods for Your Heart

Animal studies have linked fructose consumption to higher blood pressure, for instance, and a study published earlier this year in the journal "Circulation" suggested that cutting back on sugar-sweetened beverages may lower blood pressure.

In a statement, the Corn Refiners Association, a trade group representing manufacturers of high-fructose corn syrup, said that Chonchol and his colleagues were drawing "inaccurate conclusions about fructose." The association challenged the authors' estimate that 2.5 cans of soda contain about 74 grams of fructose, and also highlighted the inaccuracies of diet surveys that rely on memory.

"The risk of hypertension from fructose is not a matter of concern for the overwhelming majority of Americans," the association stated.

Chonchol and his colleagues acknowledge that more research is needed to confirm a link between fructose and hypertension.

It's still unclear how fructose might affect blood pressure, for instance. One theory is that fructose might make the body absorb sodium more readily, Chonchol says. Fructose intake may also increase levels of uric acid, which has been shown to contribute to high blood pressure.