Why do we need to look for Bigfoot? 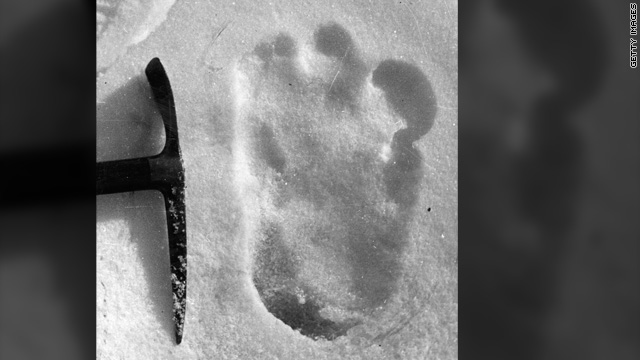 The Abominable Snowman was thought to have made this footprint in 1951 near Mount Everest.
STORY HIGHLIGHTS

Bigfoot, also known as Sasquatch, is said to be an ape-like monster but has never been proved to exist. Still, reported sightings never stop: Tim Peeler of Cleveland County, North Carolina, says he saw a giant, hairy "man-looking person" with six fingers that was going after his dogs June 5 and told it to "git." On Thursday, a large, muddy footprint in Burke County, North Carolina, stirred up more Bigfoot speculation.

Across human societies, variations on mythical creature stories like that of Bigfoot have persisted for thousands of years, and accounts of seeing or hearing them still abound. There may be some basic culture-based need for these fantastical tales, said Todd Disotell, professor of anthropology at New York University.

Monsters represent dark aspects of our subconscious worlds and can be metaphors for the challenges of life, said Karen Sharf, a psychotherapist in New York.

"Some monsters are scary. Some monsters are friendly. Sometimes in movies or myths, we befriend the monster, and it's just like in our inner world: There are monsters; there are dark aspects that we have to face," she said.

Humans also have a fascination with the divide between their species and animals, and Bigfoot bridges that gap, said John Hawks, anthropologist at the University of Wisconsin, Madison.

Believing in these creatures and following their trails in the forest is somewhat akin to an amusement park ride: They are safe ways of experiencing fear, said Jacqueline Woolley, professor of psychology at the University of Texas at Austin.

People are still searching for evidence of Scotland's Loch Ness Monster, said to have first been spotted by Vikings in the sixth century. There have also been reported sightings of mermaids -- in Israel last year, for one -- and ghosts: For instance, there are still believers in La Llorona, "the crying woman" said to have killed the children she had with Spanish explorer Hernán Cortés.

Other cultures also have legendary folk monsters that have supposedly been sighted but haven't been proved to exist. The "chupacabra," roughly translated as "goat sucker" in Spanish, has been blamed for the deaths of goats in Mexico. The blood-drinking creature is said to look like a cross between a giant dog and a lizard, and it has fiery eyes. A coyote-like creature in Blanco, Texas, created a frenzy last year as some speculated it could be a chupacabra.

Humans are inherently interested in the blurred line between fantasy and reality, psychologists say. People also want to feel like heroes; stories such as David and Goliath help people see themselves as capable of tackling their own challenges, even if their "monster" happens to be their boss or in-law, she said.

Serious scientists have studied the evidence that hunters of Bigfoot and others collect but have never made a shocking discovery based upon them.

Disotell has conducted DNA analyses of more than 15 samples over the years of blood, feces, bone, hair and other remnants of supposed chupacabra or Bigfoot-like creatures. His samples have come from various places in the United States, Canada and as far as Nepal, where the Abominable Snowman or Yeti is said to reside.

"It stretches credibility just from the sense that you can't just have one or two of these beasts running around for tens of thousands of years; you need a population to be viable," he said.

The "evidence" he has examined was, in reality, material from bears, coyotes, humans, mountain goats,and inorganic sources. He ran analyses of their DNA with the same rigor as any other samples in his lab, which routinely does such tests to help classify species of primates from all over the world.

Another strike against the reality of Bigfoot and its brethren is the lack of photos, particularly in the age of cell-phone cameras, Disotell said. Of course, believers have their explanations: Sightings are unpredictable and fleeting, beasts are nocturnal, and witnesses are often confused and scared, says the Bigfoot Field Researchers Organization.

The work of disproving Bigfoot does have a serious undertone, Disotell said, in the sense that the question of how to identify a new species is still up for debate. Primatologists still argue about which chimpanzees and monkeys should have their own subspecies or fall under the same category.

But it's unlikely that an entirely new large mammal is out there, he said.

In the United States, there have been plenty of sightings and groups dedicated to finding Bigfoot. The Bigfoot Field Researchers Organization has a map of where the creature has been spotted in North America.

Werewolves used to be a bigger fascination for people looking for supernatural creatures in the wild, but the focus has turned away from them in the past two centuries, said Brian Regal, assistant professor of the history of science at Kean University in Union, New Jersey.

Charles Darwin's theory of evolution may have cast werewolves in a more impossible light because they are hybrids of two very disparate species: wolves and humans, Regal said. Bigfoot, on the other hand, seems more plausible as a theoretical primate and not a combination of wolf and human, he said.

Fictional as these creatures probably are, they serve their purpose psychologically, Sharf said.

"We need these stories to teach us about what we are going to come against in life and how to overcome it," Sharf said.