Can eating more be the key to never dieting again? 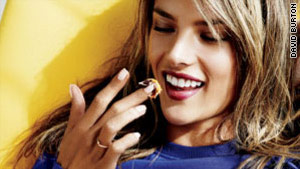 (Elle.com) -- As a child, were you encouraged to clean your plate and then go back for seconds? If so, you probably didn't grow up in France, where children are taught to savor the feeling of longing, or envie, for their next course (just think of the cheese!). Our differing notions of satisfaction were examined in a 2006 study of 133 Parisians and 145 Chicagoans published in the journal Obesity. While the French paid attention to an internal cue, the feeling of fullness, the Windy City-ers relied on the external: when their plate was empty; when their companion had finished eating; or when -- quelle horreur! -- the credits started to roll on the TV show they were watching.

Many Americans ignore the body's subtler signals of hunger and fullness, hearing only the clanging gong at each end of the pendulum -- Starving! Stuffed! -- and rarely pausing to enjoy the much more pleasant midpoint: Ahhh, satisfied.

But reacquainting ourselves with that all-important middle ground could be the key to managing our weight, once and for all. According to Cornell food psychologist Brian Wansink, Ph.D., an author of the Obesity study as well as of the book "Mindless Eating" (Bantam), overweight people have a harder time recognizing when they're satiated; they're also more susceptible to messages from ads or other sources urging them to eat. Being aware of satiety, on the other hand, allows us to enjoy our meals and, perhaps just as critical, to be enthused about what comes afterward, whether it be sleep, fun, or romance. After all, nothing kills the mood faster than a bloated belly and the accompanying guilty conscience.

Elle.com: The "i" Diet -- Fill up with these high-satiety recipes

This country's satiety problem can be at least partially blamed on our culture of yoyo dieting, which can put our internal full-ometers on the fritz. When we severely restrict calories, our fat stores shrink and produce less of the appetite-suppressing hormone leptin. Hunger is stoked, appetite increases, metabolism drops, and our satiety signals are dulled. The world starts to look like a giant smorgasbord; weight can creep back up.

Great news for dieters defeated by draconian portions -- the current nutrition wisdom is based on a radically different philosophy: Fill 'er up. The popular F-Factor Diet and the newer Full Plate Diet fill with fiber. The Flavor Point Diet, based on a theory called "sensory-specific satiety," fills, less inspiringly, by limiting the number of flavors in each meal, so you won't be overstimulated by options. And the original satiety strategy, The Volumetrics Eating Plan, has been touting high-water-content fruits and vegetables for a decade.

Veteran Tufts University researcher Susan Roberts, Ph.D., reviewed some 400 studies on nutrition and psychiatry to craft her own satiety guide. The "i" Diet, or "instinct diet," aims to "help people control their neurobiology with food," says Roberts. She calls her approach -- admittedly, one that takes practice to master -- "controlling the front end": You anticipate and satisfy your natural "food instincts" (such as a desire for variety or a tendency to eat whatever's around), so that your brain never gets to the tyrannical eat-this-Yodel-now breaking point.

Elle.com: Dieting tips: Keep your regimen from harming your skin

All of these diets agree on one basic fact: Hunger, in and of itself, is good. It's an alarm that you need more calories to function, sent out by the hypothalamus region of the brain in response to a symphony of signals, including blood levels of glucose and fatty acids, hormones like ghrelin from the stomach and leptin from fat cells, and nerve signals from the intestine.

We don't fully understand what's going on in the brain when hunger is satisfied -- exactly why fullness feels as good as it does -- but Roberts hypothesizes that we may get regular bursts of feel-good dopamine throughout the day, which stop when we're hungry.

Unfortunately, the modern diet is full of trip wires that throw the hunger/satiety equilibrium out of whack. For example, in a study published in the The Journal of Clinical Investigation, mice who binged on treats high in saturated fat had impaired sensitivity to leptin and insulin, which caused their brains to ignore signals of fullness. They didn't feel full, so they kept eating -- an effect that lasted days. If it works the same way in people, this could mean that a weekend's overindulgence would make you more likely to keep stuffing yourself through the work week.

Roberts has found that whatever food you reach for when you're really hungry is the one that matters most. Choose a Snickers, and your brain will learn to associate joy with caramel nougat. You may eventually require more bars to get the same amount of pleasure. Plus, the candy's sugary carbs stimulate a burst of dopamine in the reward center of your brain, where addition is controlled. "Snickers really snookers" is more like it. But according to Roberts, the same trick can help you crave healthy stuff: If you satisfy your inner Cookie Monster with an apple 10 times in a row, you'll actually start to crave the fruit -- not a cookie.

Like all the new fullness gurus, Roberts is fanatical about fiber; she recommends 35 to 55 grams a day to feel satisfied during weight loss (25 to 35 grams a day for maintenance). She also advocates a lot of what you already know -- combine high-protein/lowcarb foods; eat foods with a low glycemic index, such as legumes and grapefruit (which have been shown to suppress hunger by producing more stable blood glucose) -- and one thing we rarely hear: Eat more.

Elle.com: Weight in Hollywood: Is the trend changing?

Of course, her idea of "more" isn't license to gorge. While most of us would consider a bowl of lentil soup and a piece of wholegrain bread a reasonably filling lunch, the "i" Diet advises you to trade the large soup for a small, to slap ham and cheese on the bread for added protein and a little fat, add a handful of frozen grapes (you'll eat them more slowly than at room temp), and finish it all off with a cup of your favorite tea (to signal that the meal is over). According to Roberts, savvy food combining increases our satisfaction and gives us a "residual satiety" that will carry us to the next meal or snack.

Her book is packed with filling tips: The act of chewing may help us feel full, so top a salad with crunchy bits like sunflower seeds or walnuts. For a satisfying version of an old fave, substitute one third of the pasta in packaged mac 'n' cheese with cannellini beans. (If you can't go that far, sprinkle high-fiber wheat bran on the real thing.) You can also mix wheat bran into chocolate pudding.

But the greatest challenge to any nutritional shift is, of course, changing your mind. "You should constantly check in with yourself while you're eating," advises Megrette Fletcher, a dietician and executive director of the nonprofit Center for Mindful Eating. Fletcher uses a 20-point scale in which --10 is starving, 0 is neutral, and 10 is stuffed. "At zero, your focus becomes, How much more do I need to eat for a level of fullness that is nourishing to my whole being?" Fletcher says.

Then again, why bother with your "whole being" when an appetite-control spritz claims to do the hard part for you? New Fullfast contains 5-HTP, a building block of serotonin, shown in a study published in the International Journal of Obesity to significantly increase the sensation of satiety when sprayed on the tongue. Just don't tell your French amies.