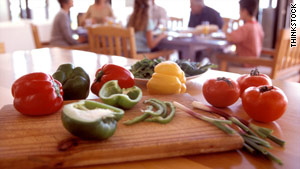 (Health.com) -- People who have low levels of the so-called good cholesterol have long been known to be at higher risk of heart attacks and heart disease. Now, a new study suggests they may have a higher risk of cancer, too.

Each 10-point increase in good cholesterol--known as high-density lipoprotein (HDL)--corresponds to a 36 percent decrease in a person's risk of developing cancer, the study found.

Guidelines say that men and women should keep their HDL over 40 and 50 mg/dL, respectively, though everyone should shoot to maintain levels above 60 mg/dL.

The study doesn't prove that low HDL actually causes cancer. Nor does it prove that boosting your HDL--exercise and healthy eating are two ways to do it--will reduce the risk of cancer, as it has been shown to do with heart disease.

Cholesterol levels--both good and bad--tend to plummet in people with cancer, so low HDL "might just be a marker of people who are about to die from cancer" rather than a contributing factor, says the lead author of the study, Dr. Richard Karas, M.D., executive director of the Molecular Cardiology Research Institute at Tufts Medical Center, in Boston, Massachusetts.

Low HDL might also simply be a sign of an unhealthy lifestyle that may itself up cancer risk, since people who exercise regularly, have a healthy diet, and don't smoke tend to have higher levels of HDL. Although the researchers controlled for health factors such as age, body mass index, and smoking in order to zero in on the effect of cholesterol, other unidentified lifestyle factors may have shaped the results.

In the study, which appears in the June 22 issue of the Journal of the American College of Cardiology, Karas and his colleagues re-analyzed data from 24 clinical trials that included nearly 150,000 generally healthy people. The trials were originally designed to test the effectiveness of statin medications, which lower bad cholesterol (known as LDL).

How HDL may affect cancer risk is still a mystery. HDL may boost the immune system's ability to fight precancerous lesions and cancerous tumors lurking in the body, Karas says.

Another possibility is that HDL has antioxidant properties that neutralize chemical compounds in the body that contribute to cancer by damaging cells. A third explanation is that HDL may reduce inflammation, which is associated with both heart disease and cancer.

The study should bring some long overdue attention to HDL, which has been unjustly overshadowed by its evil twin, LDL, says Dr. Peter Alagona Jr., M.D.., the director of general cardiology at the Penn State Heart and Vascular Institute, in Hershey, Pennsylvania.

Part of the reason is that blockbuster statin medications can lower bad cholesterol, but can't do much to raise HDL, says Alagona, who was not involved in the new research.

"We don't know that giving someone a drug to raise HDL will prevent cancer, or even heart disease," says Robinson, who wrote an editorial accompanying Dr. Karas's study.

For now, the best prescription for raising HDL is an old-fashioned one: Eat right, stay fit, and quit smoking.

"Do everything you can in terms of weight control [and] quitting smoking," says Dr. Jay Brooks, M.D., chairman of the hematology and oncology department at the Ochsner Clinic Foundation in Baton Rouge, Louisiana. "We don't have any good pharmacologic means of raising HDL really well at this point, so concentrate on the things you can do the best."