Brown rice instead of white may lower diabetes risk 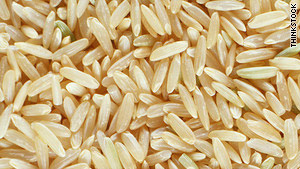 (Health.com) -- The next time you order Chinese food or need a side dish to serve with dinner, you're better off choosing brown rice instead of white. Eating more brown rice and cutting back on white rice may reduce your risk of diabetes, a new study reports.

"People at risk of diabetes should pay attention to carbohydrates in their diet and replace refined carbohydrates with whole grains," says the lead author of the study, Dr. Qi Sun, M.D., a nutrition researcher at the Harvard School of Public Health, in Boston, Massachusetts.

If you eat a little more than two servings of white rice (about 12 ounces) per week, switching to brown rice will lower your risk of developing type 2 diabetes by 16 percent, Sun and his colleagues estimate. And if you replace those servings of white rice with whole grains in general, they estimate, your diabetes risk will decline even further, by 36 percent.

White rice is produced by removing the husk-like outer layers of brown rice. Those discarded layers contain nutrients (such as magnesium and insoluble fiber) that have been shown to guard against diabetes, which may in part explain the study's findings, Sun says.

White rice may also contribute to diabetes risk because it causes blood-sugar levels to rise more rapidly than brown rice does. (This is known as having a higher glycemic index.)

Type 2 diabetes occurs when your body loses its sensitivity to insulin, a hormone that helps convert blood sugar (glucose) into energy. The result is that blood sugar, which is toxic at high levels, can creep into the danger zone. Eating lots of foods with a high glycemic index-- such as refined carbohydrates-- has been linked to diabetes risk in the past.

"White rice is digested much faster and converted into sugar in your blood much quicker, so your body puts out a lot more insulin in response to white rice," says Alissa Rumsey, R.D., a nutritionist at New York-Presbyterian Hospital, in New York City. "Whole grains like brown rice are broken down into glucose a lot slower."

In the study, which is published in the Archives of Internal Medicine, Sun and his colleagues analyzed survey data from nearly 200,000 nurses and health professionals who participated in three long-running studies. Roughly 5 percent of the participants were diagnosed with type 2 diabetes during the studies, which lasted from 14 to 22 years.

Although the researchers controlled for a number of diet and lifestyle factors (such as red meat intake, smoking, and physical activity), it's possible that the findings partly reflect the type of people who tend to prefer white versus brown rice.

For instance, the researchers note that brown rice intake was associated with "a more health-conscious lifestyle" and diet. People who ate the most brown rice tended to be more physically active, were slimmer, and ate more whole grains, while they were less likely to smoke or have a family history of diabetes.

"More brown rice is helpful because it is higher in fiber and that may protect against diabetes, but white rice may not increase the risk," Greene says.

At least half of your daily grain intake should be whole grains, Rumsey says.

"Look for brown foods such as whole-wheat bread, whole-wheat wraps, or whole-grain or blended pastas," she suggests. "There are a lot of whole grains-- such as barley, bulgur, oatmeal, and quinoa-- that are easy to cook with."

Check ingredients and nutrition labels when food shopping, Rumsey says. The first ingredient should say "whole grain" or "whole wheat," and the foods should have at least 3 grams of fiber per serving.

"Whole grains have so much more fiber, vitamins, minerals, and protein, so you get a lot more nutritional bang for your buck than with refined carbohydrates like white rice or white bread," she says.