By Bruce Feiler, Special to CNN 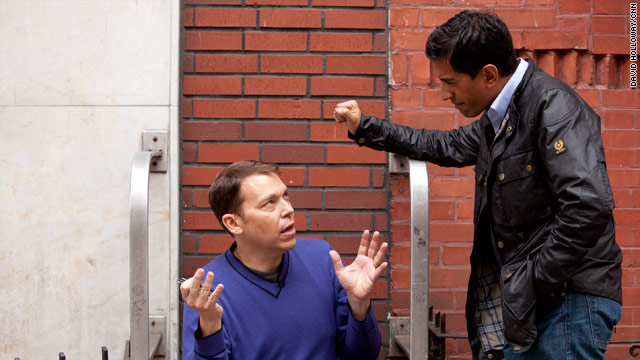 Editor's note: Imagine being a father and finding out you were going to die. Who would be there for your kids? Hear from one man who thought only of his daughters when he was faced with the news. Watch "Dads for my Daughters," a special Dr. Sanjay Gupta documentary to air June 19 and 20 at 8 p.m. ET on CNN.

(CNN) -- When Sanjay Gupta came to our home in Brooklyn, New York, recently to begin work on a documentary about "The Council of Dads," I was instantly struck that we had a number of things in common. We've both spent a lot of time on the road, including Iraq. We both have strong connections to Georgia. I was raised in Savannah; he lives in Atlanta.

But most of all, we're both dads. Between us we had five daughters under 5.

Inevitably our conversations turned to what wisdom we'd like our girls to know. In 2008, I reached out to six friends and asked them to form a "Council of Dads" to be present in the lives of my twin daughters. I then asked each friend for one piece of advice he would convey to my girls.

Their answers surprised and moved me. They made me a better father.

And they inspired me to write "The Council of Dads," which contains life lessons from these dads, my own dad, and various father figures in my life.

Read more Dads for My Daughters

Here, with a little help from these men, are Ten Lessons for My Daughters.

1. Be a traveler, not a tourist

A tourist takes the easy road. A traveler seeks out the challenging path. A tourist stays on the bus. A traveler jumps in the mud.

In college, a friend and I backpacked across Asia and got kicked out of many locations because he refused to wear anything but tank tops and flip-flops. Twenty years later he still wears flip-flops! It became his motto. Whatever you do, be true to yourself. Wherever you go, always pack your flip-flops.

When you encounter a wall, find a way to get over it, around it, or under it. Whatever you do, don't succumb to it. Don't give into the wall.

When I was a boy I caught tadpoles with a friend. Like those tadpoles, we grew legs and hopped off into the world. I had little in common with that friend. Later, when I needed help, my friend was suddenly back. Tend your tadpoles. You never know when you might need a pal.

Have patience with the unknown. No matter where you find yourself, if you ask questions, you'll find your way. Don't only seek the answers. Try to love the questions.

Life is full of everyday miracles. Sometimes it just takes a bad situation to help appreciate them. Even when it's cloudy, keep looking for the rainbow.

When you were toddlers, we begged you, "Use your words." Yet sometimes we forgot to take our own advice. Even when you're older, don't hide behind silence. When you face a problem, talk it through.

8. Always learn to juggle on the side of the hill

When I was 12, I learned to juggle on the side of a gravel hill with oranges. Every time I dropped an orange it would hit the ground, pulpify, and role to the bottom of the incline. It was a fool's errand. But it worked! If you're going to try something, try it. Don't half commit.

9. Take a walk with a turtle

In Paris, France, years ago, a new type of pedestrian appeared. He was called a flaneur, one who strolled the arcades. Flaneurs liked to take turtles for walks and let the reptile set the pace. I love this ode to slow-moving. Don't be in a hurry. Behold the world in pause.

Pilots learn that when they face a life-defining challenge, they should not run from their fear. They should embrace it. Hug the monster. Wrestle your fear into submission. Redirect it into a source of resilience and purpose.

Create your own Council of Dads

This piece is adapted from "The Council of Dads," by New York Times best-selling author Bruce Feiler. For more information, or to contact Bruce, please visit http://brucefeiler.com/.