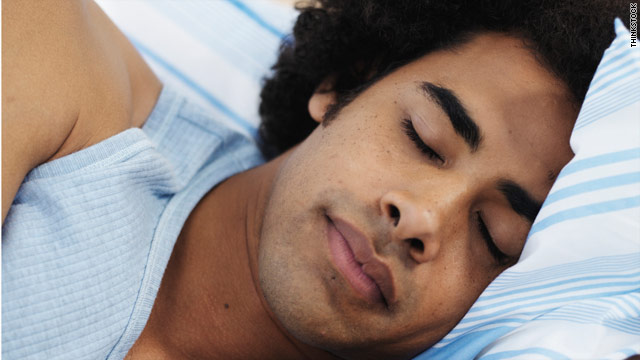 The rate of depression among the students was very high in the study of high schoolers and sleep.
STORY HIGHLIGHTS
RELATED TOPICS

(Health.com) -- Sleep-deprived high school students who doze off in class aren't just risking the wrath of their teachers. They're also three times more likely to be depressed than their alert classmates who get enough sleep, a new study has found.

"Sleep deprivation and depression go hand in hand among teenagers," says the study's lead author, Mahmood Siddique, D.O., a sleep medicine specialist at the Robert Wood Johnson Medical School, in New Brunswick, New Jersey. "Instead of giving them medications, I'd rather give them a chance to sleep better, and more."

Daytime sleepiness appears to be the new normal for adolescents. More than half of the 262 high school seniors who participated in the study were "excessively sleepy," according to a commonly used scale that gauges how likely a person is to doze off during everyday activities such as reading, watching TV, or sitting in a traffic jam.

The students reported sleeping an average of about six hours on school nights and eight hours on the weekend, far less than the nine hours a night--at least--that the American Academy of Sleep Medicine recommends for high school students.

The rate of depression among the students was very high. Thirty percent of the teens had strong symptoms of depression, while an additional 32 percent had some depression symptoms, according to the study, which was presented today in San Antonio at SLEEP 2010, an annual meeting of sleep researchers.

The students who were excessively sleepy during the day were three times more likely to have strong depression symptoms than their well-rested peers, Dr. Siddique and his colleagues found. However, it's not clear from the study whether sleeping poorly is a symptom of depression, or vice versa.

"It makes sense that daytime sleepiness would be associated with depression," says James Gangwisch, Ph.D., a psychotherapist and sleep specialist at Columbia University's College of Physicians and Surgeons, in New York City. While the ill effects of depression on sleep are well known, he adds, mounting evidence suggests that sleep deprivation in and of itself can contribute to depression.

Though the study was relatively small and limited to a single high school, experts say the findings likely reflect the experience of American adolescents as a whole. High school students in particular are facing greater academic pressure and college competition than ever before, and all those AP classes and extracurricular activities can eat into sleep time.

"To get into a good college, it's not enough to be an A student," says Dr. Lisa Shives, M.D., the medical director of Northshore Sleep Medicine, in Evanston, Illinois. "You've got to play football and be captain of the chess team, too."

Thanks to social media websites and cell phones brimming with text messages, teens' social lives are increasingly hectic as well.

"They want to stay in the loop," Gangwisch says. "Their peers are so important that if there's a way to be in touch with them in the middle of the night, they want to do it."

Parents can help their overburdened and over-connected teens get enough sleep by setting household rules and keeping an eye on computer and cell-phone use, says Ann Niles, Ph.D., a clinical psychologist in New York City who works with middle school students. "They'll go in their room at a certain time, but nobody's really monitoring them or watching how they're settling down or relaxing," she says.

Turning off the TV and computers after a certain hour and keeping technology--even cell phones--out of teenagers' bedrooms may be a good start. "Any electrical stimulus in the bedroom in the middle of the night is certainly going to impair sleep," says Lauren Hale, Ph.D., an assistant professor of preventive medicine at the Stony Brook University Medical Center, in Stony Brook, New York.

"Before computers it was the telephone, and before the telephone it was playing with the neighbors," she says. "Regardless of the technology or what kids are spending their time on, we have to set limits and rules and try to ensure that kids are watching out for their own health."