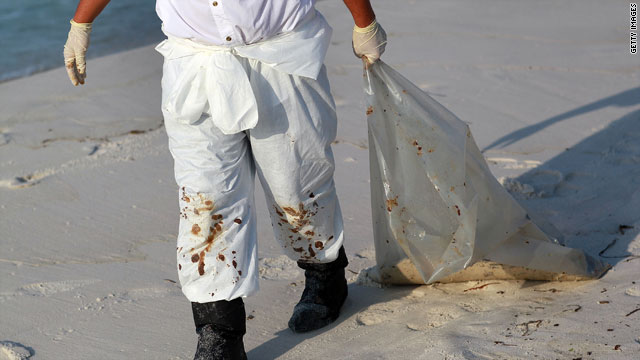 Some people who have come into contact with oil from the spill have developed skin irritations.
STORY HIGHLIGHTS
RELATED TOPICS

(CNN) -- States are tracking the health consequences of the BP oil disaster in the Gulf of Mexico, including respiratory and skin irritation problems in Louisiana and Alabama, health officials said.

The Louisiana Department of Health and Hospitals is aware of 71 cases of oil disaster-related illness as of Wednesday, said state health officer Dr. Jimmy Guidry. Of them, 50 involved workers on oil rigs or who participated in cleanup efforts, and 21 reports of illness came from the general public.

Symptoms reported by workers included throat irritation, cough, chest pain, headaches, and shortness of breath, he said. Eight workers were hospitalized, for an average of one day each, the department said.

In terms of the general public, odors from the oil leak have been related to most reported illnesses in Louisiana, the department said. Most people who reported oil-related sickness were 18 to 64 years old.

The state is keeping track of health complaints related to the oil leak through hospitals, clinics, first aid stations and a toll free number residents can call for Poison Control, Guidry said. People with oil-related symptoms are followed until they feel well again, which is usually fairly quickly, he said.

People who are sensitive to the smells should stay inside with doors and windows closed and with air-conditioning running, officials said. Consider contacting your physician if you are a Louisiana resident with symptoms and also have a pre-existing condition, such as asthma or other respiratory illness, the department said.

"It might cause people to have the symptoms we're seeing, but they're not long-term, and they're short-lived if you remove yourself from the exposure," he said.

The state is working with the U.S. Coast Guard to make sure that ships coming from the Gulf are decontaminated and washed off before they come up the river, he said.

In Alabama, which is also keeping track of oil-related health complaints, 15 cases of illness have been reported, said Dr. Don Williamson, state health officer. Ten of them had respiratory problems and five had skin irritation, he said. There was one additional hospitalization reported, but it is likely heat-related, he said.

The state has done extensive public awareness campaigns about avoiding oil exposure, Williamson said. The health department has issued advisories against swimming and all beaches have signs posted to that effect, but no beaches are closed, he said.

Based on air monitoring, there is no reason to close the beaches in Alabama, he said.

One source of concern is knowing when to lift the advisories against swimming, since they cannot be based on real-time water testing.

"This is not a tide of oil that comes in relentlessly," Williamson said. "You have these floating mats of oil and they may intrude onto the beach today, and tomorrow you may have no visible oil."

There are no known long-term health consequences of the oil leak, but the United States has never seen this kind of event before, Williamson said.

"You've got to put in place something beforehand; it's going to be very hard to reconstruct it after the fact," he said. "That will be an issue that we'll have to deal with across the Gulf."

Most dangerous chemicals in oil evaporate, and the substances in tar balls that have washed up on the coastline are not as toxic, because the oil has been weathered and the chemicals broken down, Guidry said. But coming into contact with oil could cause rashes, he said.

Small children who swim in oil-contaminated water will likely swallow some of it, which may cause nausea, vomiting and diarrhea, Williamson said.

The beaches of Mississippi have so far been shielded from the effects of the oil disaster, being somewhat protected by Louisiana and the barrier islands, said Liz Sharlot, spokeswoman for the Mississippi State Department of Health. There have not been any reported illnesses or beach closures, she said.

Florida does not have any reported illnesses connected to the oil leak either, said health department spokeswoman Susan Smith. Escambia County has posted advisories against swimming in the Gulf, but no beaches are closed, she said.

The Texas Department of State Health Services has not issued any warnings regarding the oil disaster and is not aware of any related illnesses, a spokeswoman said.