How safe is the air you're breathing, and where is it coming from? Tune in to "Toxic America," a breathtaking special investigation, with Dr. Sanjay Gupta, Saturday at 8 p.m. ET on CNN.

Five years ago Molly and Zachery Gray were in the midst of a dark, lonely spiral. It began with Molly's first miscarriage.

"It was a really emotional process of being so joyful and so happy and ready to make that step into parenthood and that being pulled away from you," said Molly, 32. "[The pregnancy is] happening and all of a sudden it's gone. It's really hard."

After a second miscarriage the Grays were on a desperate hunt for answers. After Molly got pregnant a third time, she heard about a small study to test the blood of pregnant women for chemicals. She signed up.

The Grays wondered, as many do, if chemicals in the environment could be to blame. The science on this matter cannot yet give them an answer.

A growing number of studies are finding hundreds of toxic chemicals in mothers' and, subsequently, their babies' bodies when they are born. While there is no science yet that demonstrates conclusive cause and effect between this mix of toxic chemicals children are born with and particular health problems, a range of studies are finding associations between elevated levels of chemicals in a baby's body and their development. Not definitive cause and effect, but associations.

Despite her best efforts to avoid anything unhealthy while she was pregnant with her son, Molly's blood tested high for mercury, a heavy metal that can cause brain damage to a developing fetus.

"It's really scary and disheartening," said Molly. "Somehow my son was being exposed to mercury and that's a weight to carry because I feel like our jobs as parents is to protect them, to care for them, to nurture them and to keep them out of harm's way."

Scientists at the Columbia Center for Children's Environmental Health in New York City have been following hundreds of pregnant women over the past 12 years to measure chemicals entering the womb during pregnancy. 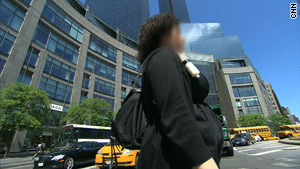 The women trudge through the city for 48 hours wearing special backpacks, each with a long tube that is slung over the shoulder. The tube, resting inches below the pregnant mom's mouth, sucks air into a special filter, giving an approximate measurement of the air that she is breathing. The backpack is designed to measure ambient toxics spewed by vehicles, pesticides, and chemicals from common household products.

"It surprised me when we analyzed the air samples [from the backpacks] and found 100 percent of them had detectable levels of at least one pesticide and the air pollutants we were interested in," said Dr. Frederica Perera, director of the CCCEH and professor at the Columbia University Mailman School of Public Health. "Every single one."

The concern does not stop with mothers breathing in toxics. The CCCEH study suggests moms are passing on those toxic chemicals to their babies. So far, the toxics measured in the backpacks match what scientists are finding in the cord blood of the babies once they are born.

It is a finding that begs questions for scientists like Perera about how these chemicals might be influencing the baby - whose ability to fend off toxic chemicals is considerably less than adults - while it develops in utero.

Small studies by other groups are also finding common household chemicals in babies.

The EWG study found an average of 232 chemicals in the cord blood of 10 babies born late last year.

They are chemicals found in a wide array of common household products -- a list that is as long as it is familiar -- shampoos and conditioners, cosmetics, plastics, shower curtains, mattresses, electronics like computers and cell phones, among others.

"For 80 percent of the common chemicals in everyday use in this country we know almost nothing about whether or not they can damage the brains of children, the immune system, the reproductive system, and the other developing organs," said Dr. Phil Landrigan, a pediatrician and director of the Children's Environmental Health Center at Mount Sinai School of Medicine. "It's really a terrible mess we've gotten ourselves into."

Landrigan demonstrated the dangers of lead 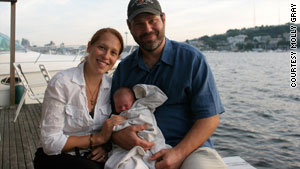 "Paxton and all of our future generations are carrying around this burden that we don't know what it means yet," says Molly Gray, with baby Paxton and husband Zachery

Perera and her colleagues are following the children in their study from in utero, to birth, up to their first several years of life. They recently published a study in the journal Pediatrics demonstrating an association between the chemicals they found in babies' cord blood, and later problems on IQ tests and development.

"Fifteen percent of children [in our study] have at least one developmental problem," said Perera.

Molly Gray still struggles with the idea that mercury from her blood may have been passed to her baby. This concern about chemicals is something she can't shake.

"There's plastics, there's mercury, there's pesticides," said Molly Gray, who is also a practicing midwife. "The things that we're cleaning our homes with, the things we're building our houses with. I think the sheer volume of the things we have to worry about is a little overwhelming."

Even when their son Paxton, now 11 months old, was born healthy, the Grays remained vigilant. As Paxton grows and develops, they steer clear of any products with potentially toxic chemicals. Still, they worry about what is out there in the environment that they cannot control.

While studies continue about potential health risks to children from chemicals, experts suggest ways to protect them from potential toxics, ranging from incorporating organic food into their diet, to keeping the home relatively dust-free (many toxic chemicals are conveyed in dust), to avoiding using toxic chemicals found in common household products.