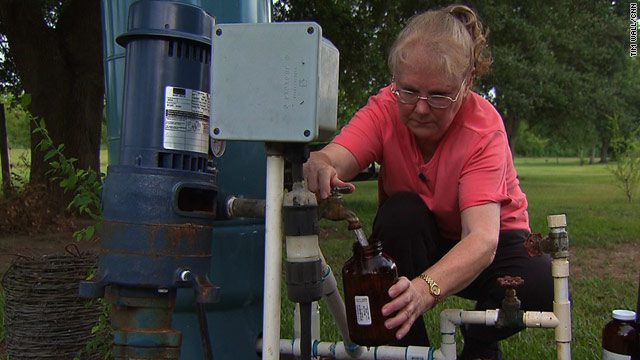 Is enough being done to protect us from chemicals that could harm us? Watch "Toxic America," a special two-night investigative report with Sanjay Gupta M.D., June 2 & 3 at 8 p.m. ET on CNN.

New Iberia, Louisiana (CNN) -- Chemist Wilma Subra was working at her desk by a picture window one cool June evening in 2006 when the passenger in a passing car fired a single shot in her direction. The bullet lodged in a brick a few feet from where she was sitting.

Not your typical day at the office for a chemist, but Subra is not a typical chemist.

"I think they were just trying to scare me and get me to back off," says Subra, a soft-spoken grandmother who has made it her life's mission to help communities fight against chemical threats from industry.

Subra didn't quit. She moved her desk away from the window and went back to work. The gunman was never caught.

"I can't close up and not be out there," she says matter-of-factly.

"Out there" means traveling to communities across the country worried about pollution.

"Communities need so much help, and you educate and empower them, and then they take on the fight and the issue. They just need that little bit of information to make them aware."

Subra received a MacArthur genius grant for her work in 1999. Her almost genteel manner belies the persistence and quiet intensity she brings to her work.

Subra, 66, president of Subra Company, began as a consultant, testing in communities for government and industry. But she didn't like not being able to tell the locals what she'd found.

Working from small offices in rural New Iberia, Louisiana, Subra has about 30 active cases at any time. Some of them last for years.

Surrounded by files and stacks of papers, Subra, also gets calls and e-mails with urgent questions from communities in the United States and around the world. Subra says she sometimes gets an emotional call from someone who works in industry.

"It's someone in their family who is now sick. And they'll start off by saying I'm so and so and I've never agreed with you and I've been on the other side, but my wife or my child is sick and I want to know what are the potential things they could have been exposed to that caused the illness," she says. "And suddenly we can have a dialogue about what they're exposed to ... They have a complete change of attitude because they thought they would never be touched by it, and now someone in their family is being touched by it. It's amazing."

In the weeks since the Deepwater Horizon exploded and sank off the coast of Louisiana, Subra has been working long hours investigating the potential environmental and human health impacts of the oil spill in the Gulf.

Her work in the past year has ranged from natural gas drilling in Dish, Texas, to groundwater contamination from oil and gas drilling in Pavilion, Wyoming. She has provided technical assistance to communities near the polluted Hunters Point Shipyard in San Francisco, California, and evaluated the potential environmental impacts of importing Italian nuclear waste through the port of New Orleans, Louisiana.

Her biggest victory, Subra says, came in a fight against an oil waste incinerator in Amelia, Louisiana, that began using hazardous waste and toxic wood treatment waste as fuel. "There were all kinds of illnesses in the community," says Subra, who is from nearby Morgan City, Louisiana. Among those who got sick: grandchildren of longtime friends who developed a type of brain tumor called a neuroblastoma. After 12 years, a federal judge ordered the facility closed. Subra testified at the trial.

Much of her time has been spent in Mossville, a 200-year-old African American community in southwest Louisiana surrounded by 14 chemical plants.

"All the people there are being exposed to a very large quantity of very toxic chemicals," Subra says.

Subra says there are thousands of communities in the United States facing environmental threats.

Asked if she's a modern-day Erin Brockovich, the environmental crusader who became the subject of an Academy Award-winning movie, Wilma Subra laughs.

"I've been doing this since way before Erin was doing it."