Distress of 9/11 may have led to miscarriages, research says 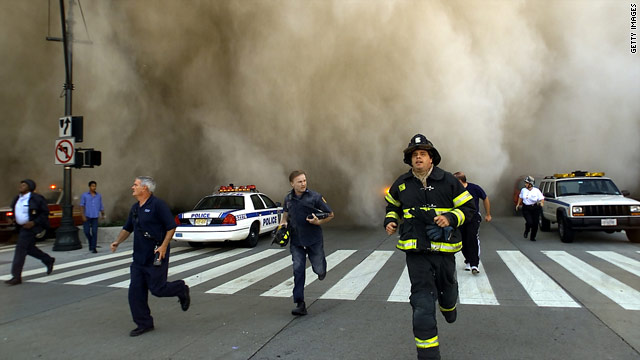 Even without personal connections, people can be stressed by major events like September 11, 2001.
STORY HIGHLIGHTS

(CNN) -- The shock and stress felt by pregnant women after the terrorist attacks on September 11, 2001, may have contributed to an increase in miscarriages of male fetuses in the United States, according to a study released Monday.

Researchers found the male fetal death rate increased in September 2001 and subsequently affected the ratio of boys born in a later month, according to the study published in the journal BMC Public Health.

The authors hypothesized that this might be a case of "communal bereavement." Even without direct relationships with the deceased, pregnant women may have been distressed by the attacks, resulting in miscarriage, according to the research.

"A huge population saw the consequences and carnage onscreen," said lead author Tim Bruckner, who is an assistant professor of public health at University of California Irvine, about the effects of 9/11. He examined this topic "because pregnancy is sensitive to stressors. I wondered whether pregnant women might have a physiological reaction to witnessing harm."

Bruckner examined only miscarriages of boys, because male fetuses are believed to be more sensitive than females to stress hormones.

Previous studies have suggested that the percentage of male births drops after natural disasters, economic decline or catastrophes.

A 2005 study found the health of the Swedish economy affected the ratio of male-to-female births. A 1998 study from Japan found a decline in male births after the Kobe earthquake in January 1995.

With fetuses, Bruckner said, "We have very little understanding why males respond more sensitively to stressors than females. ... Physiologically we don't have a grasp on this when we look at how pregnancies respond to stress. In particular, when we look at sex ratios, fewer males are born after population stress. Females remain relatively unaffected."

It's a striking finding, said Thomas O'Connor, professor of psychiatry and psychology at the University of Rochester Medical Center, but the scientific literature has not been clear whether male fetuses are more affected by stress hormones.

It's possible that male fetuses react differently to the stress hormones, said Dr. Sarah Berga, a professor and chairman of the department of gynecology and obstetrics at the Emory University School of Medicine.

"We do know that the cellular machinery of males [and] females is more different than we used to think," she said. "We're in the cusp of beginning to understand it."

There's nothing more contagious than emotion.
--Dr. Sarah Berga, chairman of the department of gynecology and obstetrics at Emory
RELATED TOPICS

The 9/11 incidents induced "widespread social and economic disruption, leading to high levels of stress and anxiety," wrote the research authors.

Bruckner and his two co-authors used data from the National Vital Statistics System that contained records of 23 million births to determine the number of fetal deaths reported in the United States between 1996 and 2002. They found the average fetal deaths in the month of September in those years.

The mean monthly number of male fetal deaths was 995. But for the month of September 2001, the number spiked to 1,115, according to the research, and the actual number of miscarriages was likely higher because of under-reporting, Bruckner said.

In the following December, the ratio of male-to-female births fell by 0.8 percent. While that appears small, Bruckner said it's still significant.

"The sex ratio of live births, it's very stable. It doesn't jump up and down that much. It's very rare to have a sex ratio to change more than 1 percent," he said.

"It's statistically meaningful," he said. "The sex ratio is responding to 9/11."

This could mean that the number of males died before their expected delivery in December 2001. There were no statistically significant variations in the sex ratio eight, nine or 10 months after the terrorist attacks.

"In terms of the take-home message, we know very little about what affects fetal loss," Bruckner said. "There's very little research on it. This paper suggests that we can identify these population stressors that can affect the likelihood of male fetal loss."

More epidemiological research should be done on stressors, such as economic downturns and events that have a ripple effect in the population, Bruckner said.

The idea that a collective traumatic event could affect pregnancy is plausible, said Berga.

"There's nothing more contagious than emotion. If something bad happens, you have a negative contagion. Having something really bad happen, it strikes me it would resonate through a population," she said.