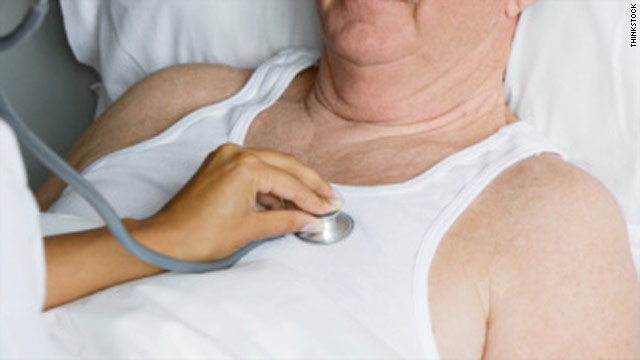 Some experts question the role of CRP and inflammation in heart disease, and worry there's too much emphasis.
STORY HIGHLIGHTS
RELATED TOPICS

(Health.com) -- Dianne has always worried about her heart health -- both her parents died of heart attacks -- yet her cholesterol has never been off the charts. All the same, the 59-year-old schoolteacher (who asked that her last name not be used) has been taking a cholesterol-lowering statin for more than two years.

Why? In 2007, Dianne's cardiologist discovered that her blood contained abnormally high levels of C-reactive protein, a marker of inflammation. Dr. Yazid Fadl, a cardiologist at Clarian Cardiovascular, in Indianapolis, considered Dianne's high CRP reason enough to prescribe a statin. "If her CRP were low, I would have advocated weight loss and exercise," he says.

Dianne may soon have lots of company. More doctors are testing and treating CRP, particularly since the Food and Drug Administration gave the green light in February to use one statin, Crestor, to treat patients with normal cholesterol but elevated CRP.

Is CRP a major advance in heart disease prevention? Not everyone's convinced. Some experts have questioned the role of CRP and inflammation in heart disease, and they worry that the new emphasis on CRP will lead to overuse of statins.

Although Dianne herself wasn't eager to start statin treatment, she says that CRP is "one of the major things that motivated me."

How C-reactive protein made it big

CRP levels tend to spike whenever something in your body triggers inflammation -- an infection, cigarette smoke, arthritis. When LDL, or bad cholesterol, starts to clog arteries, that too causes inflammation, which may in turn accelerate the buildup of the dangerous plaques that lead to heart attacks. CRP can be found in these plaques, though it's unclear whether the protein contributes to their formation or is merely a bystander.

Studying CRP levels in the general population has been feasible only since 2002, when a high-sensitivity CRP (or hs-CRP) test became widely available. This test -- the one Fadl used on Dianne -- is about 100 times more sensitive than previous tests and is capable of detecting very low (yet elevated) levels of CRP in otherwise healthy people. Using the new test, more than a dozen studies have found that people whose CRP levels are two to three times higher than normal are at greater risk of suffering a heart attack or stroke.

In 2003, the American Heart Association and the Centers for Disease Control and Prevention recommended doctors use the new CRP test on people who have normal LDL cholesterol and at least two other risk factors for heart disease (such as high blood pressure, diabetes, or smoking). Most major insurance companies now cover the test in these cases.

CRP's real coming-out party was the 2008 study led by Dr. Paul Ridker, the director of the Center for Cardiovascular Disease Prevention at Brigham and Women's Hospital, in Boston, Massachusetts. Ridker is a co-inventor of the high-sensitivity test and holds a patent on it.

Known as Jupiter, this placebo-controlled trial included nearly 18,000 people with normal LDL and high levels of CRP, half of whom received Crestor. (The study was funded by the drug's maker, AstraZeneca.) The people taking Crestor saw their LDL and CRP levels drop by 50 percent and 37 percent, respectively, and were about half as likely as the people in the placebo group to have a heart attack or stroke.

The results were so striking that the trial was stopped early, after just two years, on the grounds that it was unethical to deprive the placebo group of Crestor.

More doctors on board

The trial gave doctors a new reason to test for CRP, and since then the test has become more common, cardiologists say.

"I definitely am using it more routinely since Jupiter came out," says Dr. Erin Michos, a preventive cardiologist at Johns Hopkins Hospital, in Baltimore. Michos often tests patients who have normal cholesterol and just one heart disease risk factor (rather than two, as the AHA and CDC recommend), but she orders the test only for women over 60 and men over 50 -- the population studied in the Jupiter trial. "Almost everybody has some [risk factor] once you get to be 50, 60 years old," she says.

Fadl -- who helped write the 2003 recommendations -- says that, since Jupiter, he too is "lowering the bar a little bit" and now tests patients with only one risk factor.

Patients have even begun to request the CRP test, says Dr. Matthew Budoff, a cardiologist at Harbor-UCLA Medical Center, in Los Angeles. "I get more patients [who] come in asking for a list of five tests, and CRP is usually on it," he says.

Budoff has reservations, however. He finds the test unreliable because a patient's CRP levels can fluctuate from day to day due to illness or injury. (Cholesterol tests have about the same degree of variation, says Ridker.)

Still, Budoff usually agrees to order the test for patients, even if they have no known risk factors for heart disease. "I'm not going to argue with them for 15 minutes for a $20 test," he says. If nothing else, he explains, high CRP levels may help some patients understand that heart health is about more than just cholesterol.

Fadl sometimes uses the test to encourage his patients to start a statin. "I use [CRP] as a motivational tool," he says. "It's a way of building a case for why patients would benefit from a statin."

Budoff predicts that the use of Crestor will rise. Even before the FDA approval, he says, about 20 percent more of his patients asked about Crestor after seeing news reports of the Jupiter trial. But Fadl says that he would prescribe a generic statin, which he expects would have a similar effect, for patients who could not afford Crestor.

However, to complicate matters, two large genetic studies have concluded that CRP on its own isn't associated with heart attack and stroke risk. Because the Jupiter trial included people who had a drop in both CRP and LDL, it's hard to tell the true source of the health benefit.

If the Jupiter trial "is a validation of anything," says Budoff, "it's a validation that Crestor works, not that the CRP test works."

Expanding statin use could lead to patients being treated for decades with a drug whose long-term effects are not well understood. Although patients have taken statins for 20 years without serious side effects, questions remain about the drugs' long-term safety. (The short-term side effects of the drugs, most notably muscle and joint pain, are better understood.)

Also, slightly more people in the trial who were taking Crestor developed diabetes compared to those taking a placebo, a surprising finding that was deemed to be an acceptable risk by an FDA safety advisory panel. "A lot of studies raise interesting questions" about the effect of statins on diabetes, says Fadl. "I'd like to see more data."

Moreover, the benefits of widespread statin use may be marginal, some experts say. According to the Jupiter data, 95 people with low LDL and high CRP would need to be treated with Crestor for two years to prevent just one heart attack or stroke.

Ridker and his colleagues are beginning to study whether targeting inflammation directly can reduce heart risk, but they don't expect answers for years. "[F]or now," he says, "if you have elevated [CRP], you should diet, exercise, stop smoking, and talk to your physician about whether or not statin therapy is indicated."