More often than not, brain injuries lead to depression 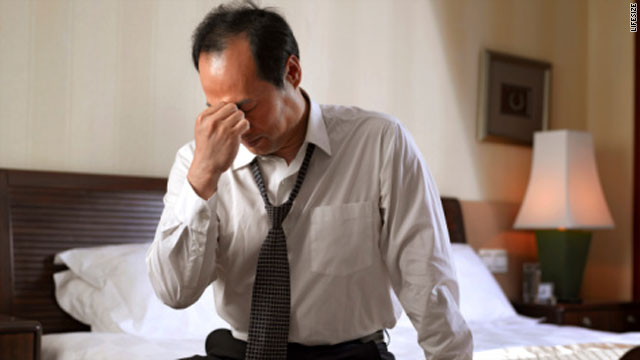 Fifty-three percent of people in a study were considered clinically depressed during the year following their brain injury.
STORY HIGHLIGHTS
RELATED TOPICS

(Health.com) -- People who experience serious head injuries often require days -- if not weeks -- of medical care to get back on their feet. For most of them, the mental aftershocks will last long after they've checked out of the hospital.

More than half of all people who suffer a traumatic brain injury will become depressed in the year after the injury, a rate eight times higher than in the general population, according to a new study in the Journal of the American Medical Association. And only about 45 percent of those who do become depressed are likely to receive adequate treatment.

"We're not talking about normal day-to-day changes in mood, but symptoms that last for more than two weeks," says the lead author of the study, Charles Bombardier, Ph.D., professor of rehabilitation medicine at the University of Washington School of Medicine.

Symptoms to watch for include low mood, low energy, feelings of worthlessness or guilt, difficulty concentrating, acting restless or slowing down, and thoughts of death, says Bombardier. Previous research has shown a higher rate of suicide following traumatic brain injury, he adds. "Any signs that the person may be thinking of killing himself should be taken very seriously."

Brain injuries themselves may cause changes in brain structure and function that predispose people to depression, says Bombardier. But certain factors also seem to increase a person's risk, including a history of alcohol abuse or depression before the injury.

The people who were depressed were more likely than the non-depressed patients to say they were experiencing trouble with pain, mobility, and everyday activities after their injury, but it's unclear whether these problems were responsible for the depression, or vice-versa.

Each year in the United States about 1.7 million people suffer traumatic brain injuries, according to the Centers for Disease Control and Prevention. These injuries, which range from mild concussions to coma-inducing trauma, claim tens of thousands of lives each year.

Most of the participants in the study suffered their injuries in falls, car crashes, or other accidents involving vehicles. Although this study focused on civilians, the authors note that traumatic brain injury is a "signature" injury among soldiers. As many as 360,000 U.S. soldiers in Iraq and Afghanistan have experienced these injuries, the U.S. Department of Defense has estimated.

Bombardier and his colleagues studied 559 patients who were hospitalized for mild to severe traumatic brain injuries at Harborview Medical Center, in Seattle, where Bombardier works as a rehabilitation psychologist. (The mild cases all had some form of complication.) Once the patients were discharged, the researchers screened them for depression every one to two months.

Fifty-three percent of the people were considered clinically depressed at some point during the year following their injury, the study notes. Nearly half of the patients who were depressed had no prior history of depression.

Health.com: How to prevent falls at home

The study corroborates previous research on the subject, says Dr. Ricardo Jorge, associate professor of psychiatry at the University of Iowa in Iowa City. "There is consistent evidence that depressive disorders are very frequent after traumatic brain injury," he says.

Only 44 percent of the people who were depressed were receiving treatment, the study found.

People who suffer brain injuries "should be encouraged to try antidepressant medications, psychotherapy, or both together," says Bombardier. "Other research indicates that people receive inadequate dosages and duration of antidepressants and psychotherapy, so getting a sufficient amount of treatment also may be important."

Starting people on a low dose of antidepressants in the first year after traumatic brain injury may even help prevent some cases of depression, according to Jorge.

Mary Hibbard, director of psychology at the Rusk Institute of Rehabilitation Medicine, in New York City, says that the study underscores how important it is for patients to be screened and treated for depression following a brain injury.

"Brain injury is a lifelong issue," Hibbard says. "Individuals with brain injury remain at risk for development of depression at any point after injury, so a periodic, routine screening every six months should be a standard of care."