Why our salt addiction is hard to kick 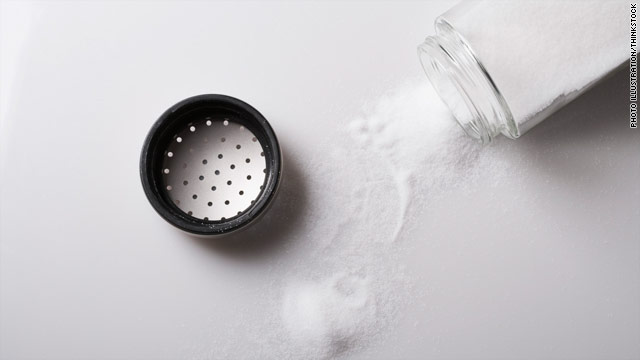 (Health.com) -- Americans love salt. And we eat too much of it. So much so that the Food and Drug Administration (FDA) is thinking about limiting the amount of sodium in packaged foods.

Cutting back on sodium would almost certainly be good for the country's health. The average American consumes nearly 50 percent more sodium than experts recommend, most of it from processed foods.

Though it adds flavor and helps preserve food, all that sodium can cause high blood pressure and increase the risk of heart attack, stroke, and other health problems. (Sodium is a component of table salt, but they're not the same thing.)

But can we handle a blast of bland? Apparently not. If the FDA and the food industry do reduce the sodium in our food, it will happen gradually, because our taste buds simply can't handle a crash course in low-sodium fare.

The fact is, experts say, the American palate has become so accustomed to the high levels of sodium and salt added to our meals that the only way to kick the habit may be to wean ourselves off it slowly.

"When we stop [using salt] abruptly, there's a dramatic difference in the taste of the food," says Jeannie Gazzaniga Moloo, PhD, a registered dietitian. "For most people, taste is the most important reason why they eat something. If we were to lower sodium too abruptly, foods just wouldn't taste good. We wouldn't eat them."

How we got hooked on sodium

Along with sweet, sour, bitter, and umami (a Japanese word that roughly translates as "savory"), salt is one of the five basic tastes recognized by human taste buds. Just as some people have a sweet tooth and some don't, some people crave that salty taste more than others.

Experts are still trying to untangle the factors that influence an individual's appetite for saltiness.

Some appear to be biological. Studies suggest, for instance, that babies whose mothers suffer from morning sickness tend to have above-average salt appetites, because vomiting depletes sodium levels in the body (and the fetus). Other studies have explored -- inconclusively -- whether individual preferences may be related to stress, anxiety, or even personality traits.

Habit likely plays a much bigger role in salt preference, experts say. As with any dietary habit, if we get accustomed to saltier food, we need to maintain that level to continue to enjoy our meals and feel satisfied.

"We do develop a taste preference for salt," says Gazzaniga Moloo, who is also a spokesperson for the American Dietetic Association. "It does have some properties that can make foods taste better. It can help neutralize foods' natural bitterness. That's oftentimes why sprinkling a little salt on vegetables for some people makes them taste better."

A similar process can happen on a wide scale. Indeed, the increasing levels of sodium in our diets -- and especially in processed foods -- over the past several decades have created what amounts to a "cultural addiction" to the taste of salt, says Philip J. Klemmer, MD, a professor of medicine at the University of North Carolina Kidney Center, in Chapel Hill.

The FDA knows what it's up against. The Institute of Medicine (IOM), an independent organization that recommended the nationwide salt reduction in a recent report, emphasized that quitting sodium cold turkey was a bad idea. (The cold turkey you buy at the deli counter contains quite a bit of sodium, incidentally.)

Instead, the IOM urged the government to work with food manufacturers to reduce the sodium content of foods gradually, so that the public may not even notice a change.

Dr. Klemmer, 63, learned just how widespread sodium is in the American diet earlier this year, when he and four of his colleagues tried to eliminate it from their own diets.

Cheese, bread, cereal, condiments, soy sauce, and the food at the hospital cafeteria were out. In their place, Dr. Klemmer ate more steamed vegetables, more fresh fruit, and a little bit of meat -- what he calls the "hunter-gatherer diet." And instead of reaching for the saltshaker, he jazzed up his meals with garlic, vinegar, and spices such as cayenne pepper.

Within a week, the sodium intake of Dr. Klemmer and his colleagues -- as measured with urine tests (the most accurate way to gauge salt intake) -- declined by more than 90 percent. Each of them also lost more than 3 pounds, on average.

Dr. Klemmer didn't struggle to adjust to his new diet. Even before the "salt challenge" (as he calls it), he tended to eat fresh foods at home with his wife and hit the gas pedal whenever he drove by a McDonald's.

Still, he gladly went back to his former diet. Maintaining a no-salt regimen would have made him feel like an outcast, he says.

"I couldn't eat a hunter-gatherer diet because it would become a cultural handicap," he says. "I'd be less fun. I wouldn't be able to associate with people, or I'd be the one sitting there with a bag lunch when everybody else was ordering food."

Why reducing sodium gradually is best The cold-turkey approach of Dr. Klemmer and his colleagues would be a tough sell nationwide. If the FDA and food manufacturers tried to sharply reduce the amount of sodium in processed foods, they would likely have a revolt on their hands.

"Most people would be pretty unsatisfied with the foods they have been eating," says Gary Beauchamp, PhD, the director of the Monell Chemical Senses Center, in Philadelphia, and a member of the committee that wrote the IOM report. "The general thought -- based on a modest but consistent amount of evidence -- is that if you lower salt in food [slowly], people will gradually adapt to that. They might not even notice it, if done sufficiently gradually."

Just as people tend to get used to increased amounts of salt and sodium, they are also are relatively quick to adjust to the taste of a diet lower in salt.

Studies show that people who switch to reduced-sodium diets develop a heightened sensitivity to saltiness within about two to three months, and therefore need less salt to get the same pleasure from their food.

The IOM's hope is that gradually reducing the sodium in the food supply will have this effect on the whole country, Beauchamp says. It's also the only practical approach, he adds, because cutting sodium intake will require the cooperation of the food industry.

More than three-quarters of our sodium intake comes from processed foods, while only about 6 percent comes from the saltshakers on our dinner tables, by some estimates.

For this reason, much of the sodium reduction needs to take place at the environmental level, not through individual initiative, says Alice Lichtenstein, DSc, a professor of nutrition science and policy at Tufts University, in Boston, and a spokesperson for the American Heart Association.

Some food manufacturers have already signaled their willingness to reduce sodium. On Tuesday, 16 companies -- including household names such as Heinz and Kraft -- signed on to the National Salt Reduction Initiative, a program started by New York City officials. Heinz, for one, intends to slash the sodium in its ketchup by 15 percent starting in May 2010.

How to painlessly cut out salt

Although reducing the country's sodium intake will require some changes in the food industry, there are steps you can take in the meantime to reduce your personal intake (and your blood pressure).

For starters, shop more carefully. Stay away from prepackaged foods (such as instant or flavored rice) and choose fresh meat, vegetables, and fruit whenever possible.

"Get rid of all the processed foods, canned soups -- all the things that have high salt," advises Suzanne Steinbaum, DO, a preventive cardiologist at Lenox Hill Hospital, in New York City. "We should never eat processed or packaged foods -- never, ever, ever. Never go to the market and get something out of the frozen food section, because those usually are very high in sodium." Even soft drinks contain a lot of hidden salt, Dr. Steinbaum says.

If you must buy packaged foods such as bread, soup, and breakfast cereals, try to select products that are labeled "reduced salt" or "no salt added." The selection is only likely to broaden in the wake of the IOM report, Lichtenstein predicts, as manufacturers experiment with ways to reduce overall sodium content without reducing taste.

When you're at home preparing dinner, don't salt a dish without tasting it first, even if you're preparing food from scratch, Dr. Steinbaum says. Likewise, Gazzaniga Moloo suggests adding salt at the end of cooking, or when it's already on the table. "You're going to get maximum flavor from it at that point, and you'll be able to use the least amount " she says.

Substituting other herbs and spices for salt can prevent dishes from tasting too bland, as can using more lemon juice and vinegar. "That can mask using less salt," says Gazzaniga Moloo, who points out that reducing portion sizes will automatically cut down on salt.

Finally, says Lichtenstein, "Make sure there's no saltshaker on the table, because sometimes people just automatically add salt regardless of whether the food needs it."

You could also try going cold turkey, like Dr. Klemmer did. But that may be more deprivation than most people can handle.

Dr. Klemmer is still enjoying his salt as much as ever. When he told us about his "salt challenge," he was sitting in his office eating an onion bagel with salmon and Jarlsberg cheese -- a pretty salty combination, he was happy to admit.