Postpartum depression: When moms feel out of control 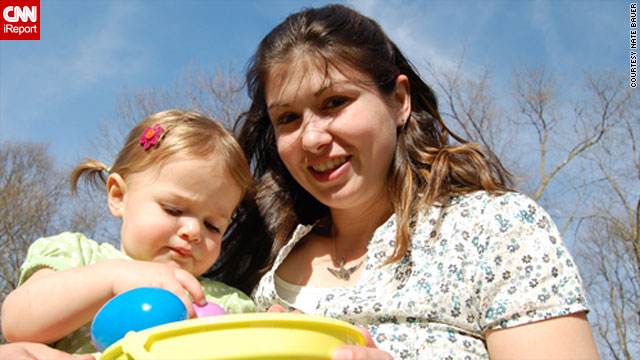 Kelly Bauer had postpartum depression when her daughter Wren was born, but has since recovered.
STORY HIGHLIGHTS
RELATED TOPICS

(CNN) -- Nine years ago, Chris Loo thought about putting her newborn daughter, Becky, in a basket on the steps of a church down the street from her home, and leaving her there.

"I don't think I really wanted to get rid of her, I just think I wasn't thinking at all," said Loo, 43, a social worker in Flushing, New York. "I started to really feel suicidal, like I just couldn't go on anymore." Watch her iReport

Becky, Loo's third child, is rarely ever in a bad mood, and people will ask Loo if they can spend time with her daughter when they're feeling down. But when the girl was born, Loo couldn't get up in the morning. She felt like she couldn't do anything.

About 10 percent of mothers, such as Loo, experience postpartum depression, severe emotional difficulties following the birth of a child, according to the Mayo Clinic.

Doctors do not know why some women have deep sadness and anxiety in the weeks or months following birth and others do not. They suspect a combination of environmental, genetic and biological factors contribute, but every woman is at risk, said Karen Kleiman, founder and director of the Postpartum Stress Center in Rosemont, Pennsylvania.

A recent study in the Archives of General Psychiatry suggests that postpartum depression is associated with higher levels of a brain protein called monoamine oxidase A (MAO-A), which removes chemicals that help stabilize mood. Researchers found that levels of this protein were greater in women four to six days after giving birth than in women who had not been recently pregnant.

The study, while small, provides a look at how postpartum depression may operate in the brain, and points to a possible remedy. Dietary supplements could be created to replace the nutrients removed by MAO-A which may lower the risk of postpartum depression, the authors said.

It's normal for new mothers to feel overwhelmed and tired, but sometimes those feelings can develop into something more serious. "Baby blues," which do not require medical attention, can include mood swings, sleep problems, irritability, crying, anxiety and sadness in the first couple of weeks after birth. Postpartum depression is more intense and intrusive: Women may lose interest in life, withdraw from family and friends, or think about harming themselves or their children.

Intensity and duration of these feelings distinguish a normal level of stress from a psychological condition, Kleiman said. After two to three weeks, clinicians usually consider the mother's experience as postpartum depression.

Lori Hansen, 43, of Garner, Iowa, suspected early on that her anxiety and insomnia may have been part of postpartum depression, and went to see her obstetrician-gynecologist four weeks after giving birth to her first son, Kyle.

"I was not in control of my emotions," she said. "I had no idea why I was crying." Watch her iReport

Her OB-GYN prescribed an antidepressant, and wasn't helpful in answering Hansen's questions about the dosage, she said. Finally, she went to a psychiatrist at the University of Iowa, who helped her more with the treatment.

"Seek help early, and if you're not feeling better, continue to press the people who are treating you to seek ways to improve your treatment plan," she said.

Therapy and the support of friends and family helped Loo get through her depression. Two women from her church came to help when her husband couldn't be home, and an online support group also gave her comfort.

Cognitive behavioral therapy -- which focuses on changing thought patterns -- and antidepressant or anti-anxiety medications are all treatment options for women with postpartum depression, Kleiman said.

Having depression once puts mothers at risk for recurrence, Kleiman said. The upside is that they will be able to recognize it the second time, and perhaps already have a plan in place to treat it.

In retrospect, Loo believes she experienced postpartum depression with each of her three children, but the most intense feelings of losing control came with her youngest.

Hansen feared going through another round of depression, but still went on to have two more children. She had depression during pregnancy with both of them, but it went away quickly, and after their births she was fine.

But Kelly Bauer and her husband decided against having another child. She and her husband both had emotional difficulties after their daughter Wren was born nearly two years ago, with the mother crying all the time and thinking that having her daughter may have been a mistake. It's not depression that's keeping her from having more kids -- just that she thinks additional children would be a handful, she said.

"We know how we did with one, and it wasn't a smooth transition," said Bauer, 28, a glass artist in Troy, Ohio. "We're terrified to see what would happen with two." Watch her iReport

Bauer, like Hansen, did find relief for her symptoms in antidepressant medication, but also credits her recovery to spending more time with her daughter and getting used to being a mother. She did not seek counseling, partly because she was afraid that if she told anyone what she was really thinking, her baby would be taken away.

"I talked to some of the other girls I knew who had had babies recently; everybody was like, 'Oh, I felt fine!' " she said. "After that, I didn't want to talk about it anymore, because I felt like a weirdo."

Bauer and Loo both had scary thoughts about not wanting their babies anymore. Unwanted thoughts are common. One 2006 study found that 91 percent of new mothers report having disturbing or intrusive thoughts.

Talking about these thoughts, such as throwing a baby out the window or burying her, can be an incredible intervention, Kleiman said. From the therapist's point of view, these thoughts do not mean that the child is in danger, as long as the mother expresses distress about them. Women who recall their scary thoughts without being upset about them may have psychosis, Kleiman said.

Loo has little memory of the first four months of Becky's life. When she began to recover, she wondered how her absence from her daughter's early months would affect her. But today, "Becky is the most joyous child I've ever known," she said.

Loo and Hansen both feel that they have become stronger people because they went through postpartum depression. For Loo, who has not had any depressive episodes since Becky was a newborn, the hard lesson was that it's OK to not be in control all the time.

"I used to get really stressed out when I couldn't succeed, and now I'm just like: I do my best," she said. "If it doesn't work the way it should work, try to work with it in a different way. I'm much more comfortable with failure than I've ever been."