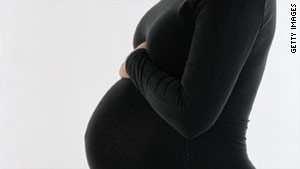 A new study suggests a quarter of U.S. women were "OK either way" about having children.
STORY HIGHLIGHTS
RELATED TOPICS

(CNN) -- Nearly one in four women of childbearing age in the United States are unconcerned about getting pregnant -- but aren't trying either -- and would be happy either way, according to a recent study.

"This finding dramatically challenges the idea that women are always trying, one way or another, to either get pregnant or not get pregnant," said Julia McQuillan, professor of sociology at the University of Nebraska-Lincoln and the study's lead author.

About 71 percent questioned in the study of nearly 4,000 women ages 25 to 45 who were sexually active said they were not trying to get pregnant, while 6 percent said they were. But nearly one in four, or 23 percent, told researchers they were "OK either way," meaning they were neither trying to conceive, nor trying to prevent a pregnancy.

"If health-care providers only ask women if they are currently trying to get pregnant and women say no, then the assumption is that they are trying not to get pregnant," McQuillan said. "Clearly, many women are less intentional about pregnancy. Yet this group should be treated as if they will likely conceive and should therefore get recommendations such as ensuring adequate folic acid intake and limiting alcohol intake."

The study comes at a time when the demography of motherhood in the United States has shifted dramatically over the last 20 years.

"In 2008, a record 41 percent of births in the United States were to unmarried women, up from 28 percent in 1990," the Pew study said. The share of births outside of marriage was highest for black women at 72 percent, followed by Hispanics at 53 percent, whites at 29 percent and Asians at 17 percent. The rate of increase over that timeframe was highest for white and Hispanic women.

When asked the various reasons why they decided to have their first child, the vast majority of parents -- 87 percent -- answered, "The joy of having children," was important or very important, the Pew study says. But nearly half also said there was no particular reason -- "It just happened."