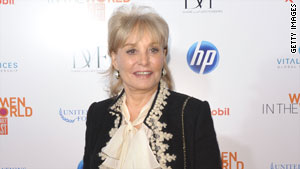 (CNN) -- After Barbara Walters told her fellow anchors on "The View" about her plans to have surgery later this week to fix her heart's faulty aortic valve, she mentioned she had known about her problem for a long time.

"And you've seen me every day, and I'm not out of breath," she added.

While it might seem strange that someone could have a malfunctioning heart valve and feel just fine, cardiologists say that's often the case.

"It's the type of thing you could have for a while and not even know it," said Dr. Sara Mobasseri, medical director of Women's Heart Services at the Piedmont Heart Institute in Atlanta, Georgia.

"Most of the time people come in with no symptoms or very subtle symptoms," said Dr. Kenneth Rosenfield, an interventional cardiologist at Massachusetts General Hospital.

"By the time they start having serious symptoms, it can be pretty far advanced."

More than 5 million Americans have heart valve disease, according to the Mayo Clinic.

Bicuspid aortic valve disease -- the most common type of aortic valve abnormality -- occurs in about 2 percent of the population and can be present from birth, according to the Cleveland Clinic in Cleveland, Ohio. For many, surgery may not be needed and the defective valve continues to function throughout their life. However, in one-third of patients with the condition the valve degenerates, requiring surgery.

On "The View," Walters, 80, especially urged women to be wary.

"Many women don't go to a doctor and have their heart checked. Men tend to do it before because we think it's a man's thing, but it's a woman's thing, too," she said on the show.

"Women often minimize their symptoms. It's just part of their [modus operandi]," Mobasseri says. "They tend to send their husbands in to see the doctor but put themselves last."

Walters hasn't said how her valve problem was discovered, but often a malfunctioning valve is first suspected when a doctor hears a murmur while listening to the heart with a stethoscope.

However, sometimes a murmur is hard to hear, so it's important to be aware of the subtle signs of heart valve problems.

This is especially of concern if you experience shortness of breath when exerting yourself or when lying down, according to the National Coalition for Women with Heart Disease.

"Sometimes people get short of breath just with basic household activities, such as carrying a load of laundry up the stairs," Mobasseri says.

While everyone feels fatigued from time to time, feeling too weak to carry out your normal daily activities can be a sign of valve disease, according to the Cleveland Clinic.

The reason for the fatigue is that valve problems make the heart work overtime.

"When the valve narrows, the heart has to work pretty darn hard to push the blood out," says Rosenfield, head of vascular medicine and intervention at the Massachusetts General Hospital.

For more on the mechanics of heart valve disease, see this information from the American Heart Association.

Chest pain while exerting yourself is one of the most common signs of valve disease, and so is discomfort, which can feel like pressure or weight in the chest.

Swelling can also occur in the abdomen or veins in the neck, according to the National Institutes of Health.

Some types of heart valve disease, such as a narrowing of the aortic or mitral valve, can cause dizziness or fainting, according to the NIH. While valve problems can often be taken care of without surgery for a period of time, eventually valve replacement surgery is usually needed, Rosenfield says.

Patients receive either a mechanical valve, or one from a pig, cow, or human, according to the University of Southern California Keck School of Medicine.

On "The View," Whoopi Goldberg asked Walters if she was scared.

"Nobody wants to have this kind of surgery," Walters answered. "It's not like having your face lifted."