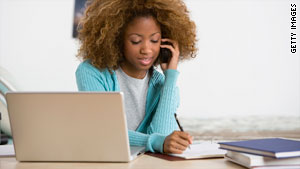 (Health.com) -- It's a situation every mother has been through: Your child is stressed out or upset, but she's at school or summer camp--too far away for you to give her a hug.

That doesn't mean she can't be comforted, however. According to a new study, talking on the phone with Mom is nearly as good as getting a hug for helping stressed-out kids calm down.

At least for young girls, talking on the phone with their mothers reduces a key stress hormone and also releases oxytocin, a feel-good brain chemical that is believed to play a key role in forming bonds, the study found.

The findings bring to mind the 1980s ad campaign for AT&T that urged people to "reach out and touch someone," says one of the study's authors, Seth D. Pollak, Ph.D., a psychology professor at the University of Wisconsin-Madison.

"The idea was that picking up the phone and calling someone would be like giving them a hug," Pollak says. Now, it looks like that may actually be true--at least if your mother is on the other end of the line. (Note: This may depend on the mother.)

In the study, Pollak and his colleagues asked 61 girls, ages 7 to 12, to give a speech or do math problems in front of an audience, a surefire way to make a kid stressed.

Using saliva samples, Pollak and his colleagues tested the girls' levels of the stress hormone cortisol both before and after the stress test. They also measured the levels of oxytocin in the girls' urine.

The cortisol levels of the girls who were soothed by their mothers--either in person or on the phone--started dropping immediately after the stress test, and returned to normal after about a half-hour. By contrast, cortisol levels in the other group continued to rise after the test and remained higher than normal throughout the experiment. (Normal, in this case, refers to the levels before the stress test began.)

Health.com: Feeling stressed? Why you may feel it in your gut

Lane Strathearn, MBBS, an assistant professor of pediatrics at the Baylor College of Medicine and Texas Children's Hospital, in Houston, called the findings "very powerful."

According to Strathearn, who was not involved in the study, this is the first study to demonstrate that a mother's voice, rather than touch, can measurably raise levels of oxytocin. He himself recently conducted a study that showed that babies' oxytocin levels went up when they could hear their mothers' voice and see them in a mirror, but the increase wasn't statistically significant.

Studies in both animals and humans have led some researchers to speculate that physical contact is necessary to boost oxytocin in the body. Much of the oxytocin research to date has been done on prairie voles, monogamous rodents that will release oxytocin only when touching a family member, Pollak says.

In humans, oxytocin is released during breastfeeding, hugging, and orgasm. It also triggers contractions during labor; in fact, pitocin, a drug used to speed up labor, is an artificial version of oxytocin.

Evidence from animal studies suggests that oxytocin helps prepare a female's brain for motherhood. Dr. Strathearn and others have used brain-scanning technology to show that the oxytocin-producing areas of a mom's brain light up when she sees her baby, and that this is associated with higher levels of oxytocin in the bloodstream.

Understanding oxytocin may help us better understand motherhood, says Anne Campbell, a psychologist at Durham University, in the U.K., who has studied oxytocin and social behavior.

"Mothers know without being instructed how to soothe a child," Campbell says. "They know because they come from a long line of women whose genes remained in the gene pool because they kept their kids alive. The challenge is for scientists to illuminate how mothering works--and that's where oxytocin comes in."

Even though Pollak's study was conducted on young girls, the findings are relevant for older children and even adults, Dr. Strathearn says.

For instance, the study suggests that physical contact isn't necessary to comfort stressed-out teenagers who may not welcome hugs from Mom as much as they used to. "Just talking with your children may have an effect on reducing the stress response," he says.

Our ability to cope with stress, in fact, may be shaped by very early interactions with our mothers, Strathearn adds.

"From early infancy, this relationship may help to strengthen and promote the development of the oxytocin system, which may have effects into later childhood, adolescence, and even adulthood on how we respond to stress," he says.