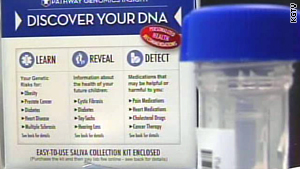 (CNN) -- Walgreens has postponed its plans to sell personal genetic test kits after the Food and Drug Administration intervened.

Genetic kits from Pathway Genomics, a San Diego, California-based company were to be sold at the nationwide drug stores starting Friday. But the announcement prompted criticism from genetics experts and the FDA, which warned consumers to be skeptical about the unapproved product.

After the agency contacted the genetic testing company, Walgreens announced that it would hold off on the sale of the kits.

"We've elected not to move forward with offering the Pathway product to our customers until we have further clarity on this matter," a Walgreens statement said.

Pathway Genomics' tests purport to examine saliva samples to assess a person's risk of getting more than 70 diseases including heart disease, hypertension and lung cancer. The company also offers carrier testing for pre-pregnancy planning, which would test for mutations that cause genetic disorders such as cystic fibrosis and Tay-Sachs disease.

The $20 kits contain a plastic tube to contain saliva, instructions and a postage-paid envelope to send the spit sample to the laboratory. The testing costs about $79 to $249.

Despite such claims, geneticists say the scientific understanding is not sufficient to accurately assess risks for common diseases such as cancer, diabetes and heart disease. While data about genetic markers can be obtained, scientists don't know exactly what those mean.

"Many of these markers are not understood, even what genes they are affecting right now," said Dr. Kenneth Offit, chief of clinical genetics service at Memorial Sloan-Kettering Cancer Center in New York. "It's a very, very early stage in this level of genomic research."

The FDA, in a statement to CNN on Wednesday, said: "Pathway Genomics has moved outside of the currently sanctioned boundaries for lab-developed tests by marketing a product in a retail store that asks consumers to collect a sample. These kits have not been proven safe, effective or accurate and patients could be making medical decisions based on data from a test that hasn't been validated by the FDA."

It warned consumers that "they may be putting themselves at risk if they rely on a test that hasn't been validated or approved by the FDA."

"The claims being made have limitations based on existing science," it said, and warned consumers "should not be making important medical and lifestyle decisions without first consulting a health care professional."

The FDA said it has no record of Pathway Genomics' test being submitted to the agency for approval and that it could not provide any information about the agency's possible actions.

In response, the company issued this statement: "We respect and understand Walgreens decision and we are communicating with the FDA about the Pathway Genomics Insight collection kit."

Earlier this week, Pathway Genomics said the kits do not require FDA approval because they are in an exempt class.

"In our company, our bar is so high," said Michael Nova, the chief medical officer at Pathway Genomics. "We welcome any discussion with FDA, but we haven't had anybody at the FDA say anything to us."

The kits help people make better health choices, Nova said. The company has full-time genetic counselors, nutritionists and doctors if consumers or their doctor wants to discuss a genetics report, he said.

These kits are not new. Pathway Genomics has sold its kits online since September, but is the first to sell the product at a major, nationwide chain. More than 30 companies have offered personal genetic testing through online orders for years.

The FDA said it has been reviewing online marketing practices of these companies and has reached out requesting that the companies speak to the agency about the claims.

The Federal Trade Commission also warned consumers on its website that direct-to-consumer tests "lack scientific validity and others provide medical results that are meaningful only in the context of a full medical evaluation."

Most genetic tests have not been approved by the FDA, said W. Andrew Faucett, director of the genomics and public health program at the Emory University School of Medicine.

For these types of tests, "the science is very immature. I don't think anybody knows what is the right answer," he said.

A saliva sample from a person sent to several genetic testing companies may yield conflicting results.

Pathway Genomics said it considers more than genetics by taking into account various lifestyle questions and family history in its questionnaire.

"We don't view genetics in a vacuum," Nova said. "It's a piece of the wellness puzzle. We're trying to promote healthy living and get people to do something about it."

Having genetic information could motivate consumers to be more proactive about their health, but these results, based on incomplete science, may give too many false positives or ambiguous information, said Offit, who was a senior author of a report on genetic testing for the America Society of Clinical Oncology.

"Those of us who are involved in the field are concerned with more of the risk than benefit here," he said. "The risk is for false alarm or for false reassurance."

A false alarm may trigger unwarranted, invasive diagnostic tests that are expensive and risky. Or a person may receive false reassurance that he or she is not at risk for a certain disease and not be vigilant about his or her health, he said.

Meanwhile, genetic carrier tests are more accurate because scientists know more about single gene disorders, such as Huntington's disease and sickle cell anemia, Faucett said. These carrier screenings involve identifying individuals who carry one copy of a gene for a disease that requires two copies for the disease to be expressed in a child.

"For many of the pregnancy carrier risk, the science is very strong," he said. "These are known genetic conditions, known to happen at a certain frequency, and you're looking for common mutations."

Before getting tested, she recommended talking with a genetic counselor to determine what an individual would like to learn and what would be done with the information.

"I think there is that potential for misunderstanding that somebody might think I'm going to get genetic testing -- it's going to tell me everything," she said. "I think people need to understand there's a lot of limitations to the testing."