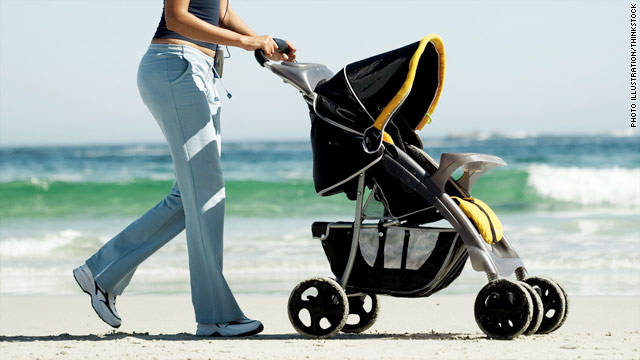 She and the other new moms jogged and lunged and side-kicked past Benetton and the Gap trying to get through what had seemed, in theory, a good idea: Strollercize.

"It was ridiculous. The instructor had us run into the food court, and meanwhile our kids are just going nuts," said Jones, who had gained 35 pounds during her pregnancy. "All I'm thinking is, I want this weight gone. So I did it -- I did sit-ups in that nasty area near the bathrooms. I wanted so badly to lose weight that I was willing to get on that carpet. Claudia and I both ended up getting sick a few days later."

For the 35-year-old mom in suburban St. Louis, Missouri, and thousands like her, shedding the post-pregnancy baby weight is akin to shoving a boulder uphill (though she'd try that if it worked).

"Because I never really got down to my original weight from the first child, the second and third child just made me bigger," she said. "Once you're so far behind, you feel like you're never going to catch up and get back to the old you. Everyone else definitely wants you to, though."

There's fierce pressure coming from all sides to go back to a weight that is "normal" -- read unrealistic.

Though women have enough sense not to compare themselves to supermodels (Heidi, good for you. You're skinny again. Rah.), svelte celebrity moms are always talking about how they worked hard, but took off 40 pounds in 40 minutes.

Or they say things that can seem insensitive, like Gisele Bundchen telling Vogue: "I think a lot of people get pregnant and decide they can turn into garbage disposals."

"What women have to constantly tell ourselves is that she is not me," said Katie Gentile, the director of the Women's Center at John Jay College of Criminal Justice. Gentile has written about pregnancy and body image for national publications. "The nannies are cropped out of those pictures. Remember that."

"The biggest mistake I see women make after having a baby is thinking they need to be like someone else, on a schedule dictated to them," said Jenny Hadfield, a Chicago trainer and marathoner who has helped new moms slim down with specific walking plans. "Women have more control than they think."

Make a plan and write it down

Stick to trying to lose one to two pounds a week, advised Dr. David Mabry, a Texas family practitioner and nutritionist who has helped women lose baby pounds.

Drink at least eight glasses of water a day, he said, and get adequate protein; eat a piece of fish or fowl the size of the palm of your hand at least twice a day. Make eight chicken breasts and put them in the fridge or freezer for the week. Healthy bulk is good, but make it last. Craving a cookie? Have one. Just don't eat seven.

Trainers who work with new moms suggest printing an empty calendar template from the internet. Schedule at least 10 minutes a day for exercise on the calendar and tape copies everywhere -- on your car dash, in a home office, on the fridge. Then try to get into a mental state that isn't preoccupied with pounds but with feeling better in your body, each day easing into freer movement.

Work out sooner than later

Medical experts say it's fine to start walking within days of giving birth, unless the mother has undergone a C-section or invasive surgery. So walk around the block. When you feel stronger, climb the stairs in your house. If your child is sleeping, get on the floor and do 10 pushups or lunges across the den. Pop in an exercise DVD and put it on mute. Can your partner watch the child while you escape to an aerobics or yoga class? When your child is a bit older, call around to local gyms. At least one will likely have a baby-sitting service.

If you're completely exhausted, try meditating. That may help to lower cortisol levels in the brain and encourage weight loss, experts say.

"Rather than working out too much or too early, I think women wait too long after giving birth to reconnect with their fitness," said Sue Fleming, the creator of a popular exercise DVD series, "Buff Moms." She recommends light weightlifting -- 5 pound dumbbells -- to build muscle, essential to burning fat long term.

"You want to wake up those large muscle groups that haven't been worked for months," she said. Fleming recommends lying on the ground and doing hip lifts or lifting an exercise ball up and over the body to work that core.

How soon a woman can shed weight has much to do with how much she weighed when she got pregnant, said Kathleen Rasmussen, a nutrition professor at Cornell University.

If your pre-pregnancy weight was in the healthy range for your height (a BMI of 18.5 to 24.9), you should gain between 25 and 35 pounds, gaining 1 to 5 pounds in the first trimester and about 1 pound per week for the rest of your pregnancy.

Another huge factor in weight loss is breast-feeding, which on average burns 500 calories a day, doctors say. Rasmussen led a 2008 epidemiological study of 36,000 Danish women that concluded that the longer a woman breast-feeds, the quicker she sheds pounds six months after birth. The downside is that American women aren't typically able to breast-feed for as long as Danish women because the Danes get 24 weeks of maternity leave; American women usually get six to eight weeks.

"We certainly make it challenging for women here," said Rasmussen, who said she lost her post-baby weight because she had a flexible teaching schedule.

She's tried to exercise, but she is unbelievably tired most of time, waking up with the sun, getting her girls dressed and trying to feed and entertain everyone. Her family's income leaves no extra money for housekeeping help or a part-time nanny. She doesn't feel comfortable leaving her kids with someone else. They are too young right now, she said. The next step is at-home exercise videos.