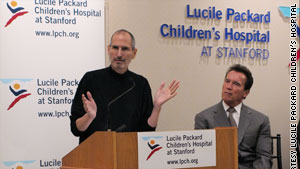 (CNN) -- A California bill may soon create a living donor registry -- the first for any state.

Spurred by Apple co-founder and transplant recipient Steve Jobs, the bill has gained support from major politicos, including California Gov. Arnold Schwarzenegger, and is expected to land on his desk this summer.

Meanwhile, on the East Coast, a far more sweeping transplant bill would make every person an organ donor who doesn't opt out. This would create an organ donation system in New York similar to the ones used in several European countries, but the measure is already facing opposition.

The two states have vastly different bills, but their intents are the same.

Patients who need kidney transplants often have friends or family members who are willing to donate their organs. But sometimes, these organs do not match.

The wait list
107,381 patients in the United States await transplants

84,781are in need of kidney transplant

2,014 days, the mean average for a person waiting for kidney transplant

Registries have been set up on the Web or by transplant centers where kidney patients and their donors seek to swap organ matches.

Having a state registry would "take it from a process that has been spontaneous and driven by the Web into a more organized fashion, that allows transplant centers to feel a greater degree of security and confidence," said Dr. Bryan Becker, the president of the National Kidney Foundation, which supports the California bill.

The registry might increase the number of transplants, he added. About one-third of U.S. kidney transplants come from living donors.

Jobs, the CEO of Apple, was a major player in bringing the bill to the forefront, said Schwarzenegger, in a March 19 press conference.

Livers are scarce, as only about one-third of the people on the national transplant waiting list receive one. Jobs' transplant stirred controversy about whether celebrity and wealth gained him an advantage.

I was almost one of the ones who died waiting for a liver in California last year.
--Steve Jobs, Apple CEO

"He wants every human being -- if you have no money at all or you're the richest person in the world -- everyone ought to have the right to get a transplant," Schwarzenegger said. "This is why he has talked to my wife; he has talked to me to put the pressure on us to get this bill going so there's enough organs available for all the potential recipients."

Jobs spoke at the conference and noted that more than 400 Californians died waiting for a liver transplant.

"Last year, I received a liver transplant. I was very fortunate because many others died waiting to receive one while I received one..." he said. "I was almost one of the ones who died waiting for a liver in California last year."

The bill is expected to be at the governor's desk by July or August.

Also under the proposal, residents would be asked whether they would like to become organ donors when they receive or renew their driver's licenses or identification cards. If they leave the box unmarked, a clerk will verbally ask the question.

A New York assemblyman whose daughter's life was saved by two kidney transplants said he wants more organ donations. One of Assemblyman Richard Brodksy's most controversial ideas: Make everyone an organ donor unless the individual opts out.

This is also known as "presumed consent" -- a marked departure from what's done in the United States. Several European countries, such as Spain, France, and the Netherlands operate on this concept. Brodsky said this would save more lives.

"We can trust the decency of the American people," Brodsky said. "But the government needs to come up with a program that lets people express that decency. That's what's missing -- a connection between the fundamental goodness of the American people and a system that is not producing the organs that save lives." Read Brodsky's bill here

Every year, 500 New Yorkers die waiting for an organ transplant, he said.

Another one of Brodsky's bills would prevent relatives from overriding organ donation decisions made by the deceased.

He became inspired by his 18-year-old daughter, Willie Brodsky, who had transplants because of an autoimmune disease.

While sympathizing with Brodsky's perspective, Tarris Rosell, a chairman at the Center for Practical Bioethics in Kansas City, Kansas, said presumed consent infringes on individual's rights.

"The saving of life is a deep, American value, but in this sort of situation, such as presumed consent, it goes up against other American values, like right to privacy, even property rights, which begins with our bodies and a deeply inscribed individualism," he said.

Some religious and cultural beliefs value the integrity of the body and oppose organ donations, he added.

United Network for Organ Sharing, a nonprofit organization that administers the nation's organ matching and placement process, does not support presumed consent, because of "inadequate safeguards for protecting the individual autonomy of prospective donors."

These recent proposals in New York and California do not mean that public opinion toward organ donations is changing, said Sheldon Kurtz, a law professor at the University of Iowa who has drafted organ donation legislation.

"You can't assume because bills are pending that public opinions have changed," he said.