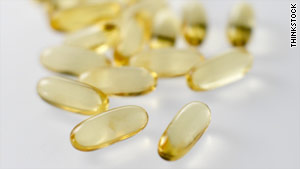 In theory, fish oil could help cognition because it's rich in omega-3 fatty acids.

(CNN) -- In the fight against memory loss, nothing is certain, doctors say.

A seemingly steady stream of new research purports to show supplements' and vitamins' promise in preventing or slowing cognitive decline, but in reality no hard evidence supports taking any of them. At the same time, such supplements have been proved safe, barring drug interactions and other complications, so some doctors recommend trying them anyway.

With millions of aging Americans experiencing a decrease in cognitive function, the need for a natural prevention method is obvious.

As many as 2.4 million to 4.5 million Americans have Alzheimer's disease, according to the National Institute on Aging. Between 1 and 4 percent of people over the age of 65 have vascular dementia, according to the Mayo Clinic.

At the forefront of the supplement claims to improve brain function has been fish oil. Several observational studies -- which did not involve the scientific rigor of control groups -- have found benefits in cognition, or a lower risk of dementia, among older people who ate a lot of fish, although results overall have been mixed.

A study from Britain, to be published in the June issue of the American Journal of Clinical Nutrition, has found no benefit in taking fish oil supplements in cognitively healthy older adults. Researchers looked at more than 800 people ages 70 to 79, comparing the effects of fish oil to a placebo of olive oil.

On average, there was no difference in cognitive decline during the two years of study. Still, the authors caution that this may not have been long enough to see the real consequences of taking fish oil.

The theory is that fish oil could help because it's rich in omega-3 fatty acids, which control inflammation and protect cells. Omega-3s have been suggested to lower the risk of chronic diseases, such as cancer and heart disease.

The authors of the new study conclude that although they found no benefit on cognition, they also found no harm, and they acknowledge the benefits that have been found for other conditions. They recommend further study on fish oil and cognitive decline.

Gingko biloba is a popular botanical supplement that comes from one of the oldest living tree species. Its leaves are thought to have antioxidant properties. Research has suggested that this herbal medicine improves blood flow to the brain and protects nerve cells, and thus may be used to boost memory in people with dementia.

But a study of more than 3,000 people, followed for six years, could not find any effect of delaying or preventing Alzheimer's disease or improving memory. The latest published results were in the Journal of the American Medical Association in December.

"I do not believe that data suggest it has a role to play in prevention," senior author Dr. Steven DeKosky, dean of the University of Virginia School of Medicine, said in an e-mail.

The research did show, however, that the supplement is safe. It is also relatively inexpensive, "so if people insist on taking it, I do not object," DeKosky said.

The prevention trial has ended, but the group is still working on the mounds of data collected from participants, ages 72 to 96, DeKosky said.

They are also going to look at whether the presence or absence of amyloid plaques, a marker of Alzheimer's in the brain, predicts participants' cognitive status over the next five years. A smaller portion of people in the study will take part in a brain imaging study to examine what portion of normal 85-year-olds have these amyloid plaques.

Dr. Alireza Atri, neurologist at Massachusetts General Hospital, gives vitamin E to his patients with Alzheimer's who wouldn't have side effects because of other medications but admits that it's not clear why this nutrient would help or what dose would be ideal.

Atri's group's findings, presented last year at the annual meeting of the American Geriatrics Society, suggested some potential in vitamin E slowing cognitive decline. They found a modest effect that increased with time.

The study has not been published in a peer-reviewed journal and has not been updated since it was presented, said Atri, also at the VA Bedford Medical Center.

Research on this subject over the past decade has been mixed. Some studies have found a decreased risk of developing Alzheimer's in people who take vitamin E, but others have not found this effect. In terms of slowing the progression of symptomatic patients, a controlled study found no effect, DeKosky said.

Large doses of vitamin E have been shown to cause serious toxic side effects, but low doses may be beneficial, Atri said.

People with bleeding problems should not take vitamin E because of interactions, Atri said.

Always consult your doctor to find out what supplements are right for you, as even natural remedies can have serious side effects in combination with other drugs or underlying conditions.

"I tell people to take a multivitamin because we know that as we get older, we have an increased risk of not absorbing all the nutrients we need," said Dr. Gary Small, director of the Center on Aging at the University of California, Los Angeles. "Beyond that, there's no hard, fast recommendation."