How scary is having a baby when you're over 40? 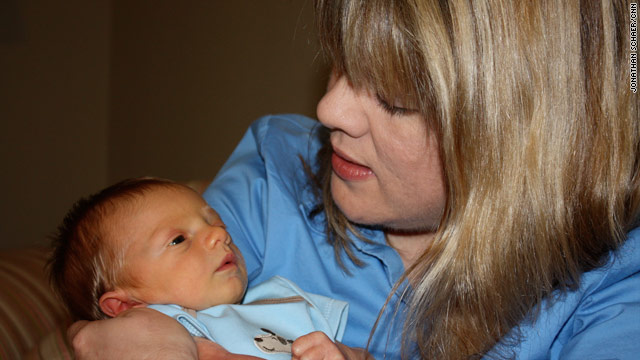 (CNN) -- Lee Robinson wasn't all that excited about having a baby. It's not that she didn't want one, it's just that she and her husband, Claude, were happy with their busy lives in Thomson, Georgia, where she's a high school teacher and he's a caterer.

Life rolled merrily along until one day, at age 44, Robinson discovered to her great shock that she was pregnant. When not one but two pregnancy tests confirmed the news, she plastered herself to the internet to figure out how risky this pregnancy was for her and her baby.

What she found online wasn't comforting. A slew of statistics about the high risks of birth defects for the baby and pregnancy-related diseases for her scared the wits out of her.

"I'd be less than normal if I didn't think this was pretty severe, life-threatening stuff," Robinson says. "All kinds of things run through your mind."

Robinson would anxiously pour out her worries to friends on Facebook.

"[Lee] is battling negative thinking," she wrote. "Please keep peppering her with 'healthy, normal babies born to 40-something mothers' stories because she really needs to hear/read them repeatedly right now."

One of Robinson's former students told her "everything is gonna be fine." A college friend told her, "You and the baby will be great." But were Robinson and her friends right to be so optimistic?

"Whatever can go wrong goes wrong at an increased rate for a woman who is older starting pregnancy," says Dr. Alan Fleischman, medical director for the March of Dimes.

So just how scary is it for a woman over 40 to have a baby? We asked physicians at the March of Dimes and the American College of Obstetrics and Gynecologists to set the numbers out for us.

Noncancerous tumors called fibroids and endometriosis, the abnormal growth of the lining of a woman's uterus, can lead to a miscarriage.

"Evolutionarily women generally reproduced in their teens and 20s. Centuries ago we didn't live much longer than our 40s and 50s," Fleischman says. "We haven't changed the basic biology of how our ovaries and uterus work."

2. Higher risk of any chromosomal disorder

Women are born with all the eggs they'll ever have. As a woman ages, her eggs also age.

"All genetic abnormalities increase as the egg gets older," says Fleischman. "The eggs are stored in the ovaries, and there is a potential for change over time."

3. Higher risk of Down syndrome

As a woman ages, the risk of delivering a baby with Down syndrome increases. Down syndrome is a genetic disorder often caused by an error in cell division. There are multiple types of Down syndrome, and the exact cause is not known.

Pregnancy stresses the body, requiring the pancreas to produce more insulin. In older women, having a baby can trigger diabetes during pregnancy.

"We like to think of pregnancy as a stress test to the woman," Fleischman says. "As you get older your pancreas is less able to respond to those stressors."

Preeclampsia is a sometimes deadly condition of pregnancy marked by high blood pressure and protein in the urine. Often when a mother has preeclampsia, the baby needs to be delivered prematurely to save the lives of mother and baby.

"Women as they get into their 40s may also have some hypertension already," Fleischman says. "And if they do, they have a higher risk of that being exacerbated during pregnancy."

Advantages of being an older mom

Working women who have children later in life are often able to spend more time with their families because they're in a better position to negotiate flexible schedules, according to research by Elizabeth Gregory, author of the book, "Ready: Why Women Are Embracing the New Later Motherhood," and director of the Women's Studies Program at the University of Houston.

"Women report that the clout they've established at work in the years before they have kids gives them a bargaining chip that they wouldn't have had" at an earlier stage of their career, Gregory says.

Plus, women who wait to have children make more money and are better able to provide for their families, according to Gregory's analysis of 2000 census data.

Gregory looked at women in their early 40s and found sizable salary differences based on when they'd had their children. She found that those who'd had babies in their mid-20s had salaries in the mid-$40,000 range, but those who waited to have babies until their mid- to late-30s had salaries that averaged in the $70,000 range.

The reason, she says, is simple. "Once kids arrive, it's much harder for women to continue to climb the career ladder, so if they start having babies earlier, they tend to get stuck down on the ladder," she says.

Last week, Robinson gave birth to a healthy boy named Price, and now she and her husband are thinking about having another child, even though she's 44 years old.

"It's really overwhelming to think I never thought I was going to be a mom," Robinson says. "We're both just absolutely in love with this little baby."