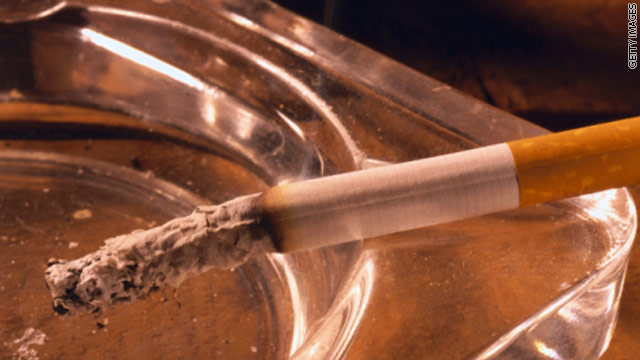 (CNN) -- A vaccine that could help people stop smoking is showing promise in early clinical trials, researchers announced this week at a national meeting of addiction specialists.

The vaccine is designed to stimulate the immune system to generate antibodies that would latch on to nicotine in a smoker's body and prevent it from ever entering the brain.

The vaccine maker, Nabi Biopharmaceuticals, reported that among those who responded best to NicVAX in earlier testing, 16 percent were able to stop smoking and not start again, compared with 6 percent in the placebo group.

These are considered statistically significant results and superior or comparable to the testing results of Zyban and Chantix, prescription medications already approved to help smokers over the age of 18 quit, Nabi officials told the National Institute on Drug Abuse conference in Albuquerque, New Mexico.

Those who took the vaccine experienced few side effects, said Dr. Raafat Fahim, president and CEO of Nabi Biopharmaceuticals.

In 2009, Zyban and Chantix were ordered by the Food and Drug Administration to carry "black box" warnings of the risk of depression and suicidal thoughts.

The effects of nicotine addiction cause nearly a half-million deaths annually in the United States, according to the American Cancer Society.

"Finding effective treatments that can help people stay off cigarettes has been a real challenge," said Dr. Francis Collins, director of the National Institutes of Health. "This phase III trial of a nicotine vaccine offers tremendous hope towards solving this immense public health problem."

One of the primary goals of the NicVAX phase III studies is to determine what the smoking abstinence rate is at 12 months, meaning how many people are actually quitting for good.

Study results are anticipated by the third quarter of 2011. Then, said Dr. Nora Volkow, director of the NIDA, "we can get the vaccine in front of the Food and Drug Administration for approval."

Volkow, citing the positive reports, said she is excited about the idea of vaccinating to fight addiction overall. Noting that a vaccine for cocaine addiction is also in testing, she said, "We could apply it for heroin, for marijuana, other drugs, and that could make a huge impact."

When a smoker inhales cigarette smoke, nicotine is absorbed through the lung tissue, into the blood stream and carried through the body. Because nicotine is a small molecule, it easily crosses the blood-brain barrier into the brain. The nicotine then binds to receptors in the brain, which release dopamine, a stimulant that gives the smoker a pleasurable sensation, known as a "smoker's high."

This process occurs very rapidly in the body -- less than one minute after tobacco smoke is inhaled -- so the nicotine fix is quick. That's what causes the addiction.

The NicVAX vaccine creates antibodies that bind to nicotine in the bloodstream, blocking it from crossing into the brain, through the blood-brain barrier. That's because these nicotine-specific antibodies are molecules that are too big to cross into the brain.

So the bound nicotine is trapped in the blood and can't reach the receptors that trigger the release of dopamine, which is what causes the pleasure response. It's believed that the addiction of the smoker to nicotine will gradually diminish because as the antibodies created by NicVAX continue to bind to the nicotine, the amount of nicotine reaching the brain will gradually decrease.

"We hope the phase III trials will get stronger results, so that a large percentage of our population can benefit from it" Volkow said. "Ideally, we'd like to see 100 percent of those taking the vaccine stop smoking for good."

Relapse is a significant challenge facing smokers, Volkow said. With currently available therapies, relapse rates can be as high as 90 percent in the first year after a smoker quits. Of the 44 million people in the U.S. who smoke, the American Cancer Society says, 70 percent say they want to quit, and about 40 percent do quit each year. Yet only 4 percent to 7 percent actually give up smoking, without help, permanently.

Want to join a stop-smoking trial?
Researchers are still seeking participants for the nicotine vaccine clinical trial. You must least 18 and smoke at least 10 cigarettes a day. Click here for information.