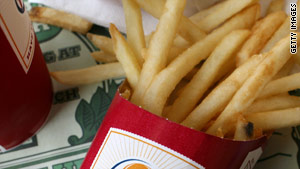 (Health.com) -- The fast-food industry has long been under fire for selling high-fat, high-calorie meals that have been linked to weight gain and diabetes, but the financial health of the industry continues to attract investors -- including some of the leading insurance companies in the U.S., a new study reports.

According to Harvard Medical School researchers, 11 large companies that offer life, disability, or health insurance owned about $1.9 billion in stock in the five largest fast-food companies as of June 2009.

The fast-food companies included McDonald's, Burger King, and Yum! Brands (the parent company of KFC and Taco Bell). Companies from both North America and Europe were among the insurers, including the U.S.-based Massachusetts Mutual, Northwestern Mutual, and Prudential Financial.

The researchers say insurance companies should sell their fast-food stock or use their influence as shareholders to make fast food healthier, by pressuring big restaurant chains to cut portion sizes or improve nutrition, for instance.

There's a "potential disconnect" between the mission of insurance companies and the often-unhealthy food churned out by companies like McDonald's, they write.

"The insurance industry cares about making money, and it doesn't really care how," says the senior author of the study, J. Wesley Boyd, M.D., an assistant clinical professor of psychiatry at Harvard Medical School, in Boston. "They will invest in products that contribute to significant morbidity and mortality if doing so is going to make money."

Boyd and his colleagues used a database that draws on financial filings and news reports to estimate the fast-food investments of the 11 companies. Their findings appear in the American Journal of Public Health.

Insurance companies disputed these figures. Andrea Austin, the assistant director of corporate relations for Northwestern Mutual, in Milwaukee, says the company's investment in fast-food companies is only about $250 million, and was at the time the study was conducted. That amounts to about one-fifth of 1 percent of the company's portfolio, she adds.

Austin also disagrees that the company's fast-food investments represent a disconnect with its mission. "We have to determine what's going to give our policy owners value," she says. "We have to make sure we fulfill our obligations to them, and to do that we invest in a wide variety of industries. It's that diversification that enables us to return value to them."

In an e-mail, MassMutual spokesman Mark Cybulski called the study's findings "absolutely incorrect" and said that as of December 31, the company's holdings of fast-food-related stock amounted to just $1.4 million, which represents less than one-hundredth of 1 percent of the company's $86.6 billion in cash and total invested assets.

Theresa Miller, the vice president of global communications for Prudential Financial, said in an e-mail that she could not discuss the specifics of the company's portfolios. But she noted that the investments in the report are within index funds, and that "a large portion" are managed on behalf of third-party clients.

MassMutual, Northwestern, and Sun Life (another insurer mentioned in the report) have contested Boyd's findings in the past. Last year Boyd led a similar analysis, published as a letter to the editor in the New England Journal of Medicine, that found that seven insurance companies held some $4.5 billion in tobacco-company stock. Then, too, Cybulski said that MassMutual's holdings were just a fraction of what Boyd and his colleagues claimed.

According to Boyd, the discrepancy in his figures and those cited by MassMutual may be due in part to two factors: Insurance companies may invest in fast-food stocks through subsidiaries over which they have limited oversight (and therefore may not consider them direct investments), and some of the investments may be in index funds, a type of mutual fund tied to the collective performance of a large group of stocks, such as the S&P 500, which may include those of fast-food companies.

The database used in his analysis provides only the aggregate of a company's holdings, Boyd says.

Boyd and his co-authors emphasize that fast food -- unlike cigarette smoking -- can be safe in moderation.

However, a growing body of research has linked frequent fast-food consumption to weight gain, obesity, and type 2 diabetes.

As a result, the study notes, several cities and towns have restricted fast-food restaurants via zoning laws. And under the health-care legislation passed by Congress in March, chain restaurants will have to post calorie information on their menus, as is already required in New York City.

In their 2009 paper on tobacco, Boyd and his colleagues suggested that insurance companies profit twice over by investing in tobacco stocks, since they can charge higher premiums to smokers and also profit if the stock rises. A similar dynamic may be at work with fast food, according to Boyd.

"They can charge you more for life insurance if you have these negative health outcomes that people have as a result of eating fast food," he says.

But investing in unhealthy industries such as fast food and tobacco isn't necessarily a win-win for insurers over the long term, especially for health insurers, says Sara N. Bleich, Ph.D., an assistant professor of health policy and management at the Johns Hopkins Bloomberg School of Public Health, in Baltimore, Maryland.

"Health insurance companies get profits if they invest in tobacco and fast food, [but] these are some of the top drivers of mortality in the country," says Bleich, who researches obesity policy but was not involved in the current study.

25 diet-busting foods you should never eat

"They are essentially killing off their consumer base, so it's not a sustainable model in the long-term. Long-term goals should be consistent with health, because that ensures a large population from which to draw consumers."

Robert Zirkelbach, the press secretary for America's Health Insurance Plans, a national association representing health insurers whose Web site lists three of the companies named in the study, declined to comment on the specifics of the study. "Our industry is strongly committed to prevention and wellness," Zirkelbach said in a statement.

"Health insurance companies are doing things across the country that are working to address obesity, to promote prevention, and to encourage people to live healthier lifestyles."

Gigi Kellett, the director of the anti-tobacco campaign of Corporate Accountability International, a Boston-based watchdog group, says that both tobacco and fast food are inappropriate investments for insurance companies.

"Tobacco remains the leading cause of preventable death around the world, and there is growing research that diet-related diseases could soon surpass tobacco," she says. "It's irresponsible for insurance companies to invest in companies that make people sick."

For her part, Bleich says that while health insurance companies, specifically, should be encouraged to divest their fast-food investments, encouraging self-regulation and competition in the fast-food industry may be a more effective way to make the industry healthier.