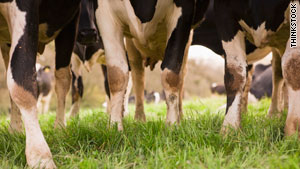 WASHINGTON (CNN) -- Cases of E. coli 0157, a strain of bacteria in the E. coli family that can cause severe food poisoning, dropped significantly in 2009, according to surveillance data for the Centers for Disease Control and Prevention.

With this drop in infection rates, the strain meets the Department of Health and Human Services' "Healthy People 2010" target of fewer than one case per 100,000 people.

Similar targets for pathogens campylobacter, listeria, salmonella and vibrio did not fare as well. Vibrio cases are on the rise, and salmonella fell far short of the goal, the data showed. While campylobacter and listeria did decline significantly, they still did not meet "Healthy People" targets.

To meet these targets, health officials say, new prevention measures will be needed.

Health officials think more than 70,000 Americans come down with E. coli 0157 each year. Stool samples must be sent to a lab to identify the exact strain.

Symptoms vary but can include severe stomach cramps, bloody diarrhea and vomiting. Most patients get better within a week, but some infections can be life-threatening.

According to the CDC, the main source of human contamination is cattle.

E. coli germs can get into food through manure, tainted water used during growing or harvesting, or improper food handling at a store, restaurant or home.

E. coli 0157 infections can result in a serious complication called hemolytic uremic syndrome, in which toxins destroy red blood cells. It can lead to kidney failure, neurological damage and, in 5 to 10 percent of cases, death.

In 2006, fresh spinach contaminated with E. coli 0157 caused one of the biggest foodborne illness outbreaks in years. More than 200 people got sick. More than 100 hospitalizations, 31 cases of hemolytic uremic syndrome and three deaths were reported in 26 states and in Ontario, Canada. The CDC estimates that thousands more fell ill but did not report it.

The preliminary report on foodborne illnesses released Thursday is from FoodNet, part of the CDC's Emerging Infections Program. FoodNet has been tracking trends in foodborne illness in the United States since 1966.

The surveillance data came from 10 states and charted laboratory-confirmed cases of food-borne illness caused by nine pathogens, or disease causing organisms, such as bacteria and viruses. Although the report is from only 10 states, health officials believe the data reflect what's going on across the country.

The data suggest that although most cases were among children under 4 years of age, the highest number of hospitalizations and deaths were among those 50 years and older.

"Tracking these illnesses over time, as exemplified in this FoodNet report, is important to monitor our progress in food safety," said Dr. Christopher Braden, the acting director of the CDC's Division of Foodborne, Bacterial and Mycotic Diseases. "We can also use similar surveillance systems to detect and investigation outbreaks of foodborne illness."

Braden says this is important to not only to identify contaminated foods and remove them from store shelves but to help in identifying foods or pathogens that were not known risks before.

"With this information, industry, government agencies and consumers can work to prevent additional outbreaks and illnesses due to that food or pathogen. The most dramatic recent example of this was the identification and investigation of the Salmonella outbreak due to contaminated peanut butter-containing products in 2008. Before that outbreak, peanut butter was not known to be a vehicle for foodborne illness."

Like E. coli 0157, most of the pathogens under surveillance were from the bacteria family: salmonella, campylobacter, listeria and vibrio.

Salmonella can contaminate almost any type of food and most often occurs after eating undercooked foods like poultry and eggs. In younger children, handling pets such as reptiles and not washing hands properly can cause infections.

Salmonella is spread when animal or human feces comes into contact with food during processing or harvesting. It can cause nausea, vomiting and diarrhea.

Campylobacter is one of the most common causes of diarrheal illness. The CDC says cases are more isolated, and many are undiagnosed or unreported. Symptoms include fever and cramps.

According to the Center for Foodborne Illness Research and Prevention, it's responsible for more than 2 million illnesses a year, mostly in children under 10. Death is rare.

Listeria tends to strike those with weakened immune systems and pregnant women; they are 20 times more likely to get sick and make up about a third of all reported cases. It's often found in pre-cooked and ready-to-eat foods like hot dogs or lunch meats and even fruits and vegetables. It even grows in refrigerators despite the cold temperature, whereas most food-borne bacteria don't. Heat is the only way to kill listeria, but if the food cools down, the bacteria can grow again.

Symptoms include fever, muscle ache and diarrhea. But it can spread to the central nervous system, causing headache, a stiff neck and even convulsions.

Vibrio is in the cholera family. Rare and often underreported, it's most often seen in those who eat raw or undercooked shellfish, mainly oysters. Illness can be severe and life-threatening. If vibrio gets into the bloodstream, it's fatal nearly 50 percent of the time.

Cryptosporidium is the lone parasite. Most people get it from contaminated food and water, but it can be passed on to humans from farm animals and pets. Gastrointestinal symptoms range from mild to severe, and those with compromised immune systems are most at risk.

According to the CDC, there are approximately 76 million cases of food-borne disease in the United States each year. Most are mild, causing symptoms for only a couple of days. Still, there are nearly 325,000 hospitalizations and 5,000 deaths annually, usually among the elderly, children or those who are sick or have compromised immune systems.

Braden says consumers can cut their risk of infection by choosing foods that have been processed, like pasteurized milk, juice, eggs and even oysters and by cooking foods properly, especially meats, poultry and eggs. Perishables should also be refrigerated, leftovers should not be left out out, and hands and cooking surfaces should be clean.