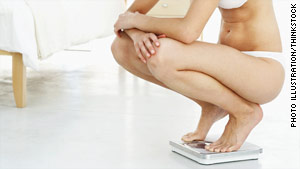 As many as 10 million females and 1 million males in the United States suffer eating disorders.
STORY HIGHLIGHTS

But there are people engaging in harmful eating behaviors who haven't lost much weight, or who gain some, and they are not getting the treatment they need, doctors say.

Some insurance companies will only cover treatment for eating disorders if the patient meets all of the criteria outlined in the Diagnostic and Statistical Manual of Mental Disorders, a guidebook for diagnosing mental illnesses, doctors say. Patients who don't match all the symptoms, which include severe weight loss, are labeled "eating disorder not otherwise specified" (EDNOS) and sometimes don't qualify for the level of care they need.

A new study, published in the journal Pediatrics, found more than 60 percent of patients with EDNOS met medical criteria for hospitalization and were, on average, sicker than patients diagnosed with full-blown bulimia.

That means more than 60 percent of patients with EDNOS may have trouble getting care covered by an insurance company, said Dr. Rebecka Peebles of the Department of Pediatrics at Stanford University School of Medicine.

"The diagnosis provides no meaningful information regarding the nature of the problem or appropriate treatment approaches," said Pamela Keel, professor of psychology at Florida State University, who was not involved in the study, in an e-mail.

Researchers looked at 1,310 children and adolescents aged 8 to 19 years.

As many as 10 million women and 1 million men in the United States suffer from eating disorders such as anorexia and bulimia, according to the National Eating Disorders Association. Estimates put binge eating disorder, which currently falls under an EDNOS diagnosis, at an additional 25 million people.

EDNOS originally came about as a way of classifying people with dangerous eating behaviors and thoughts who didn't fully meet criteria for anorexia or bulimia, said Peebles.

But that means this single category can apply to an obese person who binges but doesn't purge, a severely underweight person who almost meets anorexia criteria but continues to menstruate, and a normal-weight individual who purges but doesn't binge, Keel said. For example, a person who regularly vomits after eating small amounts of food would fall under EDNOS, not bulimia.

"Sometimes criteria that can be used as guide can really end up being counterproductive," said Dr. Steven Crawford, associate director of The Center for Eating Disorders at Sheppard Pratt Health System in Baltimore, Maryland, who was not involved in the study.

Many think of eating disorders as not being that serious unless someone loses a lot of weight, meaning some people are not being screened who need help, Peebles said.

"Some patients who are normal weight or even overweight are still very medically scary," Peebles said. "They are probably, I would expect, the highest risk to get missed in the community by either their physicians or their parents."

Some insurance companies say when people are below 75 percent of normal body weight, they warrant in-patient care, experts say. But that means if patients improve from 66 percent of normal body weight to 75 percent, an insurance company may say they need to be discharged at a point that may be too early from a treatment point of view, Crawford said.

Other requirements don't have anything to do with weight -- for instance, a woman must have gone three straight months without a period in order to have anorexia nervosa, according to the Diagnostic and Statistical Manual of Mental Disorders.

"It is often the case that admission to an inpatient program for eating disorders is denied because individuals do not meet the full diagnostic criteria," said Michael Strober, professor of psychiatry and director of the eating disorders program at the University of California, Los Angeles Neuropsychiatric Institute and Hospital.

Getting insurance coverage for adequate treatment is a major problem across all eating disorders, Keel said.

Some problems associated with the EDNOS diagnosis may be addressed when the Diagnostic and Statistical Manual of Mental Disorders gets published in its fifth edition in 2013, experts said.

Some of the proposed revisions include dropping amenorrhea as a criterion for diagnosing anorexia nervosa, meaning a young girl or woman who has regular periods but is losing weight at a dangerous pace could have this diagnosis instead of EDNOS.

Another revision on the table is to make binge eating disorder its own category, so that it would not fall under EDNOS anymore. Such changes would help patients get more appropriate treatment, experts say.

Peebles would also like to see more guidance in the Diagnostic and Statistical Manual of Mental Disorders about diagnosing children with eating disorders. Many kids come to be screened at higher relative weights than adults would, she said.

"We're seeing patients younger and younger, patients as young as 5," Peebles said. "Certainly 7 to 12 years of age, that's not uncommon to see anymore."