In Sudan, a war is waged to eradicate the 'fiery serpent' (CNN) -- It started as an itch on James Madol's right ankle and festered. Two days later, the boy cried when he saw a thin white worm emerge.

"I didn't know what it was," says Madol, who was around 5 at the time.

The worm slowly slithered from his ankle, secreting toxins that felt "like fire burning." Even after the worm was removed, Madol couldn't walk for months. He stayed in his hut, able to crawl out only to relieve himself.

Now 32 and a nurse, Madol travels for miles on dirt roads through rural southern Sudan, tracking down his longtime enemy, the Guinea worm. Spanning up to 3 feet, the Guinea worm looks like an elongated spaghetti noodle. Infection with this parasite can paralyze humans, sicken entire villages and cripple economies. 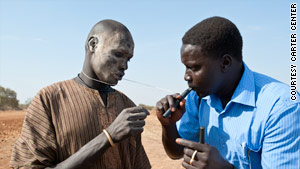 At right, James Madol, a nurse and regional coordinator, instructs how to use a pipe filter properly for drinking water.

Believed to be "the fiery serpent" described in the Bible, the Guinea worm has plagued mankind since ancient Egyptian times. Now it's close to becoming the second disease in the world to be eradicated, after smallpox, health officials say.

The Guinea worm's last stronghold is in conflict-marred southern Sudan, a region of 9 million people where about 85 percent of the world's 3,000 remaining cases of the disease are found. The world's public health powers, including the World Health Organization and the Carter Center, have focused efforts there.

If that work is successful in Sudan, Guinea worm would be the first disease to be eradicated without a vaccine or medication, a remarkable achievement, according to experts. After a full year with no new cases, Sudan will be monitored for three more years. At the end of the fourth year with no new infections, the World Health Organization would declare the disease vanquished. Optimists foresee official eradication by 2015.

But that hinges on nonbiological factors.

Sudan holds its national election April 11-13. The country has remained divided along north-south lines for more than two decades and faces the potential of more political upheaval next year in a national referendum on whether southern Sudan should be an independent country.

When they hear Sudan, many Americans might think first of Darfur, the troubled western region where human rights violations and civil war have made headlines. The battle against Guinea worm is taking place at the southern end the country. Still, health officials fear that possible political instability and violence could derail Guinea worm eradication.

The efforts against the disease depend on a network of Sudanese volunteers and health workers who treat and track remaining cases, practicing bare-bones epidemiology. They carry packs with basic medical supplies: gauze, ointments, water filters and notebooks. While traveling to remote villages, health workers sleep outdoors, despite the dangers in a land torn by conflict. 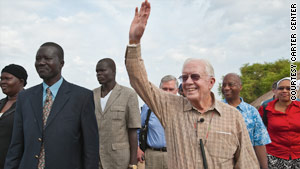 "The only nightmare any of us have for the program is to see continuation of insecurities in this area," said Makoy Samuel Yibi Logora, the director of the Southern Sudan Guinea Worm Eradication Program.

"If there began, for whatever reason, a resumption of war and real insecurity, you start having mass movements of people," said Dr. Donald Hopkins, a former director of the U.S. Centers for Disease Control and Prevention.

Sudan borders nine countries. Eruption of violence could interrupt surveillance efforts and people infected with Guinea worm could migrate and unwittingly spread the disease, perhaps reinfesting countries that have been able to get rid of it.

"For all those reasons, there's a lot at stake," said Hopkins, vice president of Health Programs of the Carter Center. "It's in the world's interest to try to help try to keep a lid on the violence there."

In 1986, the Carter Center, the human rights foundation established by former President Jimmy Carter and his wife, Rosalynn, mounted a crusade to end Guinea worm, partnering with affected nations. Back then, 18 African and Asian countries were reporting 3.5 million cases of Guinea worm disease.

Guinea worm disease: Then and now

"Guinea worm is not only a blight on people physically, it's one of the most intense pains that human beings have experienced," Carter said on a February trip to Sudan, where he visited health workers and patients to bring awareness to eradication efforts.

Because the disease lacks a vaccine, the key to curbing the disease is to change people's behavior.

"It's not easy," said Dr. Gautam Biswas, team leader of the WHO's Guinea Worm Eradication program. "It's one of the reasons it has taken so long. You're asking people to always filter water, to take it only from safe water sources." The program, he said, "has demonstrated that it can really work."

Some medical experts have expressed skepticism with the concept of disease eradication, such as bioethicist Arthur Caplan and Dr. Mark Miller, a director of the Division of International Epidemiology and Population Studies at the John E. Fogarty International Center. Both have published articles questioning the value of efforts focused on eliminating disease.

Such campaigns are "very controversial and potentially very expensive and detracts from other potential uses. It's an opportunity cost," said Miller. "If resources were unlimited, then we'd eliminate all diseases."

But he added, "Relative to other organisms, and widely transmissible agents like polio, which is hard to detect, Guinea worm eradication is scientifically and technically possible and since it's eliminated or eradicated, it won't easily come back."

Caplan said the disease made a "strong case" for eradication: Guinea worm is serious, with major consequences for children and the economy, and it couldn't be turned into a bioterrorism tool.

The Guinea worm insinuates itself in a human body after a person drinks contaminated water. In the human's stomach, larvae mature into worms, which then penetrate the intestinal wall and travel through the body's connective tissue. After about a year without symptoms, the worms prepare to lay eggs. Blisters begin to erupt, usually on the infected person's legs or feet. From these blisters, the worms emerge. The parasite can also emerge from other areas of the body: arms, head, chest and even the eyes.

Making its way out of its host's body, the worm causes excruciating pain, which patients have likened being on fire. To soothe the burning, the infected person often submerges his or her wound into a pond or a drinking water source, allowing the emerging worm to deposit its larvae in its desired environment: water. The water is contaminated and the cycle begins anew.

"Most of the pain comes from secondary bacterial infections from the wound as the worm is coming out," Hopkins said. Secondary infections can progress to sepsis and can be lethal if left untreated. If the worm comes out next to an ankle, knee or elbow, for example, the joint could become frozen, paralyzing the patient.

The traditional treatment, still in use today, is to coax the worm out of the body by winding the creature around a stick, a few centimeters a day. This method is thought to have inspired Asclepius, the symbol for the medical arts, a snake coiled around a staff. Containing an entire worm can take weeks, even months. 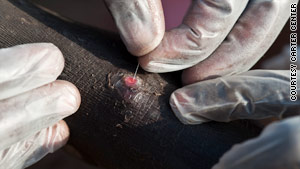 The worm creates a blister on the person's body and crawls out, usually from the legs or feet.

"It's terrible. It's really hard," said Madol, who is a regional coordinator overseeing four states in southern Sudan for the Carter Center. "You see kids affected with Guinea worm. They are crying, extremely crying. I understand. The infection is really painful."

During that time, Madol and other health workers bandage and wash the wounds and discourage patients from going into water sources.

The fight against the worm today involves more than 1,000 Sudanese who volunteer to educate their home communities about the worm's life cycle and spread low-tech prevention methods. Health workers hand out nylon water filters, treat drinking water sources with a chemical called Abate and persuade people to use alternate water sources.

"The hardest part is talking to people to have them understand," said Madol. When they are urged to use the water filters or to chemically treat the water, they respond by saying, "'We've been drinking this water, you see here. Why do you tell us to treat the water?' It takes time to communicate with people to talk about Guinea worm."

Some of the worst-struck communities are the most difficult to reach, such as the migrating cattle camps.

Watch: The world within a migrant cattle camp

"You have a massive amount of people moving very long distances for their livelihood attending cattle and undertaking traditional, normal duties," Hopkins said. "Those kinds of challenges are difficult in terms of keeping track of patients."

Another challenge is that community rivalries, interethnic conflict or cattle thefts can result in violence.

The Guinea worm staff's medical supplies have been destroyed and robbed. Two health offices have been set on fire. Last year, six districts severely affected by Guinea worm had to be evacuated because of safety concerns. Some village volunteers have died in the communities they serve, said Logora, the Sudanese health official.

Despite the threat of conflict, health volunteers continue their work against a nearly forgotten pathogen.

"It's a life mission for me," Madol said. "We will eradicate the Guinea worm."

This report is based on independent interviews conducted by CNN in addition to video footage and still images provided by The Carter Center.