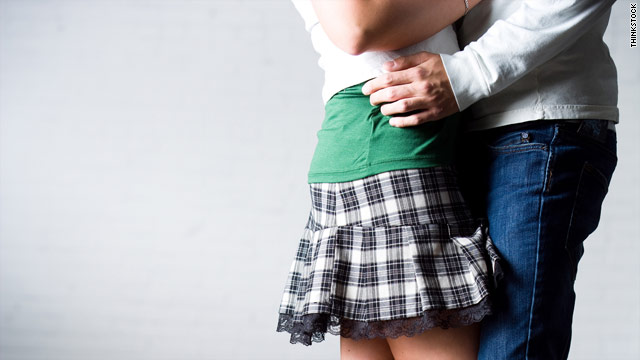 Under federal guidelines, programs that get abstinence-only funding must "teach that abstinence from sexual activity is the only certain way to avoid out-of-wedlock pregnancy."
STORY HIGHLIGHTS
RELATED TOPICS

(CNN) -- The health care reform legislation that President Obama signed recently isn't only about insurance coverage -- there's also a renewal of $50 million per year for five years for abstinence-focused education.

Programs that receive this funding must "teach that abstinence from sexual activity is the only certain way to avoid out-of-wedlock pregnancy, sexually transmitted diseases, and other associated health problems," according to the Department of Health and Human Services. To qualify, they must also teach that sex before marriage is "likely to have harmful psychological and physical effects." These are part of the "A-H definition," requirements for programs to receive abstinence funding under Title V of the Social Security Act.

"Title V is trying to make sure that kids are being given a message that saving sex and childbearing for marriage is the safest, healthiest, best choice," said Scott Phelps, executive director of Abstinence & Marriage Education Partnership. Public schools hire educators from this organization to teach abstinence, and may use Title V funding for it, he said.

In Phelps' experience -- he started his abstinence education work in Chicago, Illinois, 10 years ago -- the abstinence message is embraced by kids, even some who have already become sexually active. "They didn't realize they could stop," he said.

Organizations promoting evidence-based sex education say it's troubling that this $250 million will go to state programs that have not been shown to work.

"Just the fact that we continue to pour money into programs that have no evidence of effectiveness at all just doesn't seem to us to be good evidence-based health policy," said Heather Boonstra, senior public policy associate at the Guttmacher Institute, a nonprofit reproductive and sexual health research firm.

There have been numerous studies suggesting that it's not so easy for people to practice abstinence consistently. A congressionally mandated study in 2007 found that none of four abstinence programs showed a significant positive effect on sexual behavior among youth. A January 2009 study in Pediatrics found that religious teens who take virginity pledges are less likely to use condoms or birth control when they become sexually active, and just as likely to have sex before marriage as their peers who didn't take pledges.

Phelps' program doesn't teach that sex before marriage is wrong, but that waiting will enable teens to eliminate the risks of sexually transmitted diseases and pregnancy. Students are taught that contraception, a "limited part of our conversation," reduces risk, but does not avoid it altogether, he said.

The law sets up a separate funding stream of $75 million for "personal responsibility education," which includes teaching about both abstinence and contraception. It sets aside an additional $25 million for untested but innovative programs.

Having separate funding for abstinence-focused and comprehensive programs "is a method that provides real choice for states and for communities, and we would like to see that model used across the board," said Valerie Huber, executive director of the National Abstinence Education Association.

But Huber's group is not happy that abstinence-focused programs get less funding per year than the other approaches. "We would like to see equitable funding," she said.

Abstinence programs have received federal funding through a program that grew out of welfare reform during the Clinton administration. The $50 million per year began in 1998 and expired in 2009, with restoration in the recent health care legislation from this year until 2014.

States have the option of tapping into the $50 million or not, but those who want it have to contribute also, Boonstra noted. For every $4 of federal money, states have to put up $3 of their own money, according to the Department of Health and Human Services.

As of June 2009, 22 states, plus Washington D.C., had declined to apply for funds under the program, according to the Guttmacher Institute.

A study published in February in the Archives of Pediatrics & Adolescent Medicine found that an abstinence-based program was more effective than other initiatives at keeping sixth- and seventh-graders from having sex within a two-year period.

Rather than asking students to delay intercourse until marriage, however, the program told students to wait until they were ready. It also did not portray sex in a negative light.

For these reasons, it is unclear whether that program would qualify for funding from the $50 million allocated in the health care bill, because it does not fit the A-H definition, said Bill Albert of the nonpartisan National Campaign to Prevent Teen and Unplanned Pregnancy. Boonstra agreed that it would likely not fit this category, as it differs from the programs that have received funding in the past. Huber said she thought it would qualify, although she has not seen the curriculum.

It's better to invest taxpayer dollars into what works, Albert said. Public opinion surveys reveal that Americans view abstinence and contraceptive education as complementary, not contradictory.

"There is great and very wide support among parents and among teens themselves that young people should be encouraged to delay sexual activity," Albert said. "But it is also clear that the American public wants young people to receive information about contraception."