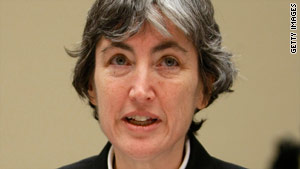 Atlanta, Georgia (CNN) -- Health officials are reminding Americans that the H1N1 flu is still around and causing serious illness, particularly in the Southeast.

CDC officials said one state in particular is seeing more activity than it had since October. "The situation in Georgia is critical," Dr. Anne Schuchat, director of the National Center for Immunization and Respiratory Diseases at the CDC, told reporters in a media briefing on Monday.

"The preliminary information is that the hospitalizations are occurring in adults, not in young children, and they're occurring in people with chronic health conditions," Schuchat said.

"We're seeing higher rates of disease in adults who have chronic conditions like diabetes, cancer, heart disease, asthma, COPD [chronic obstructive pulmonary disease] and other lung illnesses," said Surgeon General Dr. Regina Benjamin, who participated in a CDC press conference for the first time. She reiterated a common theme heard from CDC and other health officials since the H1N1 flu virus emerged nearly a year ago: "Vaccination is the single best protection against H1N1."

So far, an estimated 60 million Americans have been infected with H1N1, 265,000 have been hospitalized and 12,000 have died from the virus, according to Benjamin and Schuchat.

While 12,000 H1N1 deaths is a lower than the average 36,000 deaths seen from seasonal flu annually, 90 percent of the H1N1 deaths occurred in people under age 65. "That's many more deaths in a particular year among young people than we usually see with seasonal flu," Schuchat said.

She and the CDC encourage people to "take advantage of the increased supply to protect them and protect their loved ones."

She also pointed out that minority groups need be reminded of the importance of getting vaccinated because they experience higher rates of some chronic illnesses, which make them vulnerable to serious infection from this flu virus.

The CDC can't explain why there is an increase in H1N1 cases at the moment. Schuchat told reporters she's less concerned about a big outbreak or big spike in illness, but rather that she's "concerned about the people who will suffer needlessly because there is vaccine available and people, particularly ones with diabetes, heart disease, cancer and pregnancy will need to take advantage of the vaccine."