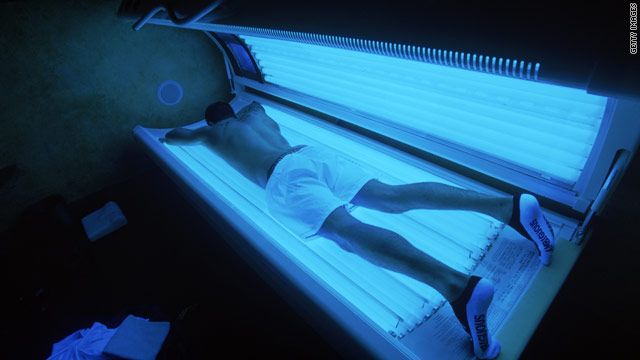 Washington (CNN) -- One day ahead of a scheduled Food and Drug Administration hearing on the risks of ultraviolet radiation from tanning lamps, lawmakers and advocates gathered Wednesday to brief the news media about what they say are the dangers of tanning beds and the need for additional FDA regulations.

According to the Melanoma Research Foundation -- a nonprofit organization that aims to find a cure for melanoma, a type of skin cancer -- exposure to tanning beds before the age of 30 increases a person's risk of developing melanoma by 75 percent.

"At the moment, tanning beds are classified as safe by the FDA, but given the scientific evidence, that's something we now know to be false," Dr. David E. Fisher, a member of the foundation's Scientific Advisory Committee, said at Wednesday's briefing.

But the Indoor Tanning Association -- an organization founded, according to its Web site, to protect the freedom of individuals to acquire a suntan via natural or artificial light -- disagrees.

Rep. Rosa DeLauro, D-Connecticut, a cancer survivor, also spoke at Wednesday's briefing. "We must change the classification of these tanning beds so that the severity of the health threat they pose is better conveyed," she said. She also said she hopes the FDA will revise warning labels for tanning beds so users will better understand the risks.

Rep. Charlie Dent, R-Pennsylvania, whose father-in-law died from complications of melanoma, likened it to a warning found on a pack of cigarettes.

"If you buy a pack of cigarettes, there's a surgeon general's warning label on there that says you can get lung cancer and you can die. We all understand that, we think it's necessary, it's good information, " Dent said. "Same thing should be the case for tanning salons [and] tanning beds. You understand that if you go into one that there is a risk associated with it."

Read more about the 10 percent tax

Rep. Carolyn Maloney, D-New York, also recently introduced the Tanning Bed Cancer Control Act of 2010 in the House, to "help prevent the occurrence of cancer resulting from the use of ultraviolet tanning lamps by imposing more stringent controls on the use of such devices." Maloney said she is hoping for many co-sponsors for this bill.