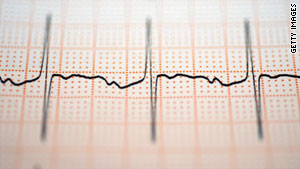 (CNN) -- Erectile dysfunction is a strong predictor of death in men with cardiovascular disease, according to new research out this week.

German researchers said in the current issue of Circulation: Journal of the American Heart Association that men with cardiovascular disease, also known as heart disease, and ED were twice as likely to die from all causes than men who did not have erectile dysfunction. And those with ED were 1.6 times more likely to suffer from a serious cardiovascular problem such as a heart attack or stroke.

The study focused on 1,519 men from 13 countries who had heart disease. The men were asked in a questionnaire whether they suffered from ED and at what degree they were impotent (mild, mild-to-moderate, moderate or severe). They were given follow-up questionnaires after two years and at their final visits five years later.

During the five years, some men were given specific drugs for heart disease, such as ACE inhibitors including ramipril, telmisartan or a combination. These drugs relax blood vessels and decrease the heart's workload. Others were given placebos.

After the five years, researchers found that patients with ED tended to be older and had a higher prevalence of hypertension, stroke, diabetes and lower urinary tract surgery than those without ED. And deaths from all causes occurred in 11.3 percent of the patients who reported ED but in only 5.6 percent of those with no or mild ED at the start of the study.

Approximately 50 million U.S. men, including 50 to 52 percent of men ages 40 to 70, have some degree of erectile dysfunction, according to the Massachusetts Male Aging Study, one of the largest U.S. studies on the disorder.

Researchers said the risks of death from all causes increased with the progression of ED.

"Erectile dysfunction is something that regularly should be addressed in the medical history of patients; it might be a symptom of early atherosclerosis," said Dr. Michael Böhm, lead author of the study and chairman of Internal Medicine in the Department of Cardiology and Intensive Care at the University of Saarland, Germany.

"If I suffered from ED, I would start changing my lifestyle. Eat better, watch my cholesterol, stop smoking, exercise and see my doctor," Stein warned. "This is important for all men, not just those with cardiovascular problems.

"It's something we've suspected for a long time," Stein said. "That's because ED is associated with endothelial dysfunction that occurs in cardiovascular problems. But this study is the first to really put it into perspective."

Endothelial dysfunction is a chemical breakdown of the thin layer of cells that line the blood vessels. The condition also can be found in diabetes and hypertension.

Stein also noted that researchers found that although the medication given to the participants could reduce cardiovascular events in high-risk patients, the drugs didn't influence the course or the development of ED.

And according to Böhm, drugs for erectile dysfunction may cure the initial problem, but they don't protect against cardiovascular or other life-threatening illnesses.

"The medication works, and the patient doesn't show up anymore," Böhm said. "These men are being treated for ED, but not the underlying cardiovascular disease. A whole segment of men is being placed at risk."

Böhm continued, "if a man has erectile dysfunction, then he needs to ask his physician to check for other risk factors of cardiovascular disease."