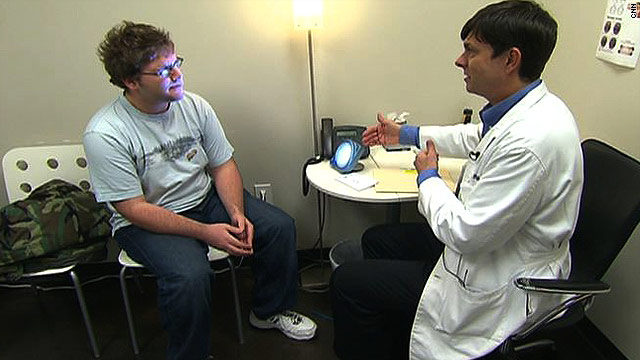 Johns Creek, Georgia (CNN) -- Ethan Merbaum knows all too well the feeling of not getting a good night's rest, of lying in bed with nothing happening and being tired without being able to fall asleep. He knows all about watching his grades plummet and even about falling asleep in class.

"I really can't think of a time when my sleep disorder wasn't affecting my life," he said.

All the sleepless nights and daytime exhaustion made sense when he got a diagnosis of delayed sleep phase syndrome in spring 2009, his junior year of high school, when the problem was at its peak.

In delayed sleep phase syndrome, the internal biological clock runs longer than the normal 24-hour cycle, resulting in a desire to go to sleep later and wake up later. The plan of action? Resetting Merbaum's clock through the use of light therapy: daily morning exposure to a countertop light box.

It's something Merbaum, 18, is keeping in mind as the time change looms this weekend.

"I was happy we had a name. Was it something we could fix? I knew there was a long road ahead," said his mother, Michele Weiner-Merbaum.

That long road would set him on the course to graduate from high school on time, something that had been in question last year.

Although his case was severe, Merbaum's not alone in having the disorder. A 2006 poll by the National Sleep Foundation found that only four out of 10 adolescents said "I had a good night's sleep" every night or almost every night.

In fact, as children change during puberty, so do their sleep habits. Specifically, their biological rhythms -- the sleep and wake cycle -- get longer to varying degrees. This can cause a teen to function better at night and need to sleep later.

Adolescents with very long rhythms -- 25 hours or longer -- are considered delayed. When this happens, the body schedule can conflict with that of school and of society, and the teen can experience daytime sleepiness or another common symptom, hyperactivity.

The American Academy of Sleep Medicine says that although it's unknown how many people in the overall population have the syndrome, it could be as much as 16 percent of adolescents. In fact, the academy estimates that the syndrome is seen in approximately one-10th of people in sleep clinics who have chronic insomnia.

Dr. Jeffrey Durmer, who specializes in both neurology and sleep medicine, sees many adolescents in his practice in Johns Creek, Georgia.

"There are two things in particular that a child will demonstrate who has a delayed sleep phase. One is, they'll have incredible difficulty going to bed at night, so insomnia. The second is they will be very difficult to wake up in the daytime. They'll seem as if they're lazy or not doing what you ask of them, but really they're just delayed. They can't get up."

He reminds his patients that clock-on-the-wall time may not match someone's internal clock; that mismatch is what needs to be corrected.

The body's internal clock is set by exposure to light. Artificial light therapy is one way of bringing a too-long rhythm down to a normal 24-hour one. Simply sitting at arm's length from a specially designed light box for about 30 minutes each morning will pull the body clock into a normal cycle, the circadian rhythm, and, over several months, can reset it.

With daylight saving time beginning this weekend, Merbaum says he is not taking chances with his biological clock. He will use light therapy as instructed.

If a child is having a hard time adapting to the spring forward, Durmer says, there are things parents can do for their children, aside from keeping a regular schedule of sleep-wake.

"Give them more light exposure in the day as soon as they wake up, and dim the lights in the evening. Try to get rid of the light around bedtime," he said. "That way they can start getting the new cue for sleep onset."