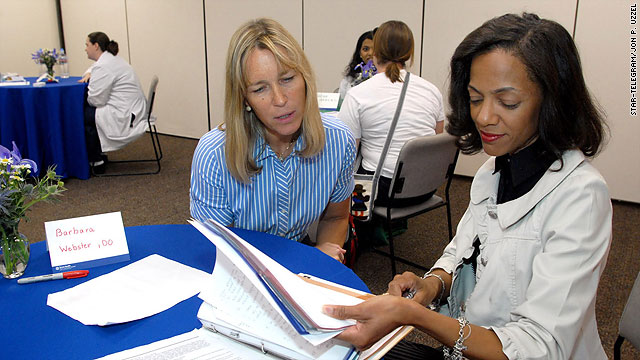 (CNN) -- New in town, Brandy Preston reasoned that it was only lunch. She liked the fact that there were no strings attached. If she didn't like the person, she could just say, "It was nice to meet you," and leave.

"I was surprised because it felt so comfortable and I wasn't afraid to ask questions," the 29-year-old said. "I mean, I'd finally met the right match.

"This gynecologist was exactly who I wanted."

Call it speed dating for doctors. Texas Health Harris Methodist Hospital, near Fort Worth, has launched a program called Doc Shop that invites prospective patients to casually meet and size up a lot of doctors in a short amount of time.

"It is about chemistry in some ways. Most of the time you have to rely on referrals from your friends and you really just don't know what that first visit is going to be like," said Preston. "Am I going to have wait three hours to see you? With the kind of doctor I was looking for -- am I going to feel judged when I give you information about my lifestyle?"

Much like its romantic predecessor, speed dating, Doc Shop lets patients spend five minutes each with more than a dozen doctors. The physicians are seated at tables spaced far enough apart to insure privacy. The free event, sponsored by the nonprofit hospital, lasts about an hour and includes lunch.

Dr. Manisha Parikh, a 33-year-old OB-GYN, has drawn six new patients to her practice at Texas Health Harris by participating in four Doc Shop events since last fall when the program launched.

Notices about Doc Shop, the brainchild of a hospital marketing specialist, are sent to e-mail addresses in the hospital's database, posted on its Facebook and Twitter accounts, and showcased on fliers posted at Fort Worth businesses. Four sessions have been held since last fall with OB-GYNs. Ten more are scheduled for 2010, expanding to include pediatricians on March 23.

There's a new attitude in medicine where patients want to feel like their doctor is their friend.
--Dr. Manisha Parikh

"People know that hospitals are places to go when they are sick, but many actions by hospitals are also about making sure patients and consumers have the tools and information they need to lead healthier and better lives," said Matt Fenwick, AHA spokesman. "This hospital showcases one more way that this can be achieved."

Still, the program isn't without its critics. Five minutes is not enough time to get to know a doctor, said pediatrician Dr. Oscar Brown, who has practiced 30 years in suburban Longview, Texas, and has for years offered 30-minute free lunchtime sessions about prenatal care. "It seems fairly superficial because everybody can put on a good face for five minutes," he said. "I wonder if the consumer is really getting everything they can out of the experience.

"But I see the good in this, too," Brown added. "I could see this working in a larger community where you can get a lot more practitioners together, if there's more time allowed. If I were a young doctor, I would probably be open to this."

Physicians who've attended Doc Shop events say they're worth it, if only to break the ice earlier with a new patient. "We're in a field where people have partners who have cheated and they're concerned they might have an STD," said Dr. Rebecca Guinn, an OB-GYN at Harris Health who has acquired 11 new patients through the service.

"I'll often go through an entire examination and be finishing up and then they'll tell me the real reason that brought them there and I'll have to begin again. If I can establish even a bit of a rapport with someone before they are in my office, it's going to help."

Guinn was impressed by the age range of people who attend Doc Shop. She talked to a pregnant teenager and the girl's family who had not yet found a doctor they trusted. An older woman wanted to discuss her family's history of cancer and hear what Guinn knew about the latest treatments.

"I want a doctor who is up on all the new studies," said Ann Williams, a 52-year-old mother of three girls ages 18 to 22. She attended a session to find a doctor for herself and them.

It had never before occurred to her to research a doctor, she said. When she was pregnant with her first child, and throughout "baby life," she just went to the "first old man" a friend recommended.

"Back then, I just didn't even think I had control -- many women probably felt that way -- and I want my daughters to know they have it," she said. "I don't want them to experience what it's like when you determine that you don't like your doctor but you're already in a, uh, compromised position and you can't get up and walk out."

"With this program, if my daughters think a doctor isn't for them, they don't have to reject that person, they just don't choose them," said Williams. "Like speed dating, no one's feelings get hurt."