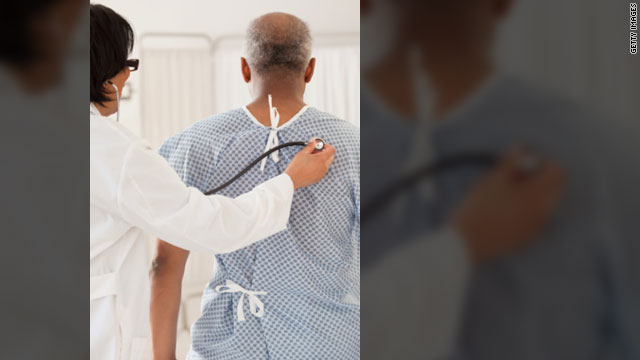 (CNN) -- Most men 50 and older should seriously consider the potential risks of treatment before deciding whether to be screened for prostate cancer, the American Cancer Society said Wednesday in revised guidelines.

"What we are trying to say to men is the harms (of prostate screening) are better proven than the benefits," said Dr. Otis Brawley, chief medical officer of the American Cancer Society.

While these tests can detect cancer, they also can produce false positive results that lead to unnecessary and uncomfortable biopsies and treatments that carry undesirable side effects such as impotence and urinary incontinence.

On the other hand, tests that appear normal can overlook existing cancers.

The American Cancer Society estimates 192,000 men were diagnosed with cancer last year. Prostate cancer is the second leading cancer in men, killing about 27,000 in 2009.

The cancer society now recommends that beginning at age 50, men with no special risk of prostate cancer discuss the pros and cons of screening with their doctors and decide together whether it's worth doing.

The new guidelines are pretty much like the old guidelines issued in 1997 and 2001, but put more emphasis on individual counseling.

Cancer society official on what's behind the guideline change

Stephen, 63, a testicular cancer survivor from Hamilton, New Jersey, has undergone routine screening since he was in his late 40s. In 2007, his test results showed the PSA levels were climbing.

Even though his PSA levels were still below the 4.0 nanograms per milliliter threshold considered to be a positive PSA score, Stephen, who asked that we only use his first name, said he just wanted to eliminate the cancer risk.

"I did tons of research and was offered a lot of options," he said. "I decided to get a radical prostatectomy. I had no really long-term side effects, thankfully."

Cancer specialists know that because prostate cancer is usually a slow growing disease, many men are likely to die from other causes before they would die from prostate cancer.

"In prostate cancer we desperately need to tell the difference between cancers that kill and cancers we need to watch," he said.

Until new screening tools are available, the updated guidelines are meant to help men decide what to do.

Two studies published in the New England Journal of Medicine almost a year ago failed to clearly answer whether men should be screened using a PSA test.

One study conducted in the United States found no significant difference in the incidence of death among men who were screened for prostate cancer and those who weren't. In the other study, conducted at multiple sites in Europe, researchers found PSA testing lowered prostate cancer-related deaths by 20 percent.

According to data from the National Cancer Institute, three out of 100 men will die of prostate cancer. A 20 percent reduction in deaths as seen in the European study translates to only 2.4 men out of 100 dying.

Consequently the guidelines have essentially stayed the same. The American Cancer Society believes before a man gets screened for prostate cancer, he should be educated about the pros and cons.

"I think the ACS folks got it right," said Dr. Michael Barry, who reviewed the two major studies for the New England Journal of Medicine last March. Barry is the chief of the general medicine unit at Massachusetts General Hospital in Boston and president of the Foundation for Informed Medical Decision Making. He said men really need to learn about the risks and benefits of prostate screening and make a decision for themselves.

"Before we had the trials, we had to say we don't know if there's a benefit to screening. Now we can begin to quantify those benefits," he said.

"All men considering testing for prostate cancer should be fully informed by their clinicians about their risk factors and other uncertainties before being screened," a statement from ASCO President Dr. Douglas Blaney said.

But not everyone agrees with the new/old cancer society recommendations. The American Urological Association, which revised its guidelines last April based on the same two studies, agrees that making an informed decision for screening is important. But it says all men with a life expectancy of 10 years or more should have a baseline PSA test at the age of 40.

Dr. Herbert Lepor, chairman of urology at NYU Langone Medical Center in New York, takes care of prostate cancer patients, including Stephen. Lepor believes every man should be screened once for prostate cancer at 40, and annually after 50.

He says then, when you find the 10 percent to 15 percent of men whose screenings suggest a risk of cancer, you talk to them about the risks and benefits of treatment.

Lepor thinks it is impractical to suggest that a primary care physician who has 15 to 20 minutes to spend with a patient fully explain all the pros and cons of screening in the course of an annual physical.

"How do you present this to a patient? You can't possibly spend an hour discussing this," Lepor said.

During the same 15- or 20-minute physical, the physician also has to discuss issues like blood pressure, diabetes, exercise and diet.

The new guidelines say that men can "be referred to reliable and culturally appropriate sources," so the information doesn't have to come from a doctor, Brawley noted.

For Stephen, getting screened is important.