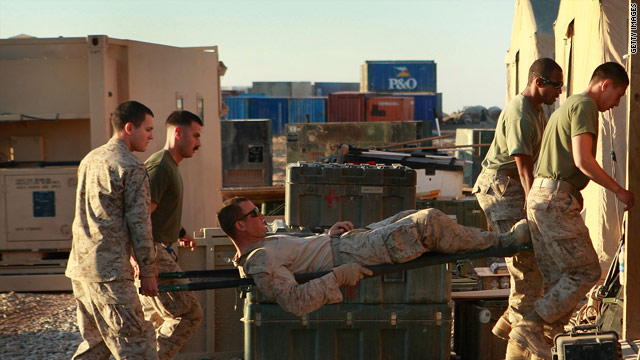 A new policy from the Pentagon will require a 24-hour examination of troops involved in roadside bomb attacks.
STORY HIGHLIGHTS

Washington (CNN) -- U.S. troops in Iraq and Afghanistan targeted in roadside bomb attacks will be pulled from duty and examined for 24 hours before being cleared for battle again, Pentagon officials told CNN Tuesday.

The new medical policy will be announced by the Pentagon in the coming weeks, said officials who are familiar with the upcoming announcement.

The new directive comes after continued concerns that troops in combat can sustain one or more traumatic brain injuries (TBI) and have them go undetected, only to have their effects surface months or years later.

The vast majority of these brain injuries come from the blast wave of a roadside bomb, which can cause a mild concussion without any obvious symptoms.

As many as 300,000 U.S. troops who have returned from Iraq and Afghanistan could be suffering from TBI, according to a 2008 RAND study. The idea behind the new policy is to detect the injuries as early as possible.

The directive will take service members off the battlefield and have them medically evaluated depending on the severity of the blast, according to Pentagon officials with knowledge of the policy.

The new regulations are expected to result in squad and platoon leaders working with field medics to identify service members standing within 55 yards of a blast or whose vehicles were damaged by an explosion, according to the officials. Those service members would then be evaluated for at least 24 hours before being allowed to return to duty.

In that daylong period, the individuals would be checked for headaches, memory or concentration loss, ringing ears and blurred vision. Those are all signs of a concussion.

A low score or any symptoms would keep them out of combat until their condition improves.

The new policy is expected to be signed into action by Deputy Defense Secretary William Lynn within two to three weeks, according to senior Pentagon officials.

While the policy comes out of the Secretary of Defense's office, much of the substance of it comes from studies commissioned by Chairman of the Joint Chiefs of Staff Adm. Mike Mullen.

Over the past year, Mullen has pushed for such a policy and put teams into Iraq and Afghanistan to look at best practices for treating troops who have been affected by such blasts.

"The sooner you are able to treat somebody and get it right, the higher the probability you'll reduce the long-term impacts. So speed is really important here," according to Mullen.

Roadside bombs are the leading killer of U.S. and international troops in Afghanistan. According to statistics from NATO's International Security Assistance Force, about 80 roadside bombs have exploded across the country each week since June 2009.

The number of strikes involving improvised explosive devices against U.S. troops in Iraq has dropped dramatically as fighting has subsided over the past year.

An estimate for the number of troops that could be taken off the battlefield under the new policy is about 2 percent, according to Pentagon officials, who say that troops are not getting hit by roadside bombs at a rate that would force units to slow operations.